For pre-seed burndown prior to most cereals, there is a fairly wide choice of herbicides to tank-mix with glyphosate, including some of the phenoxies, dicamba, Heat, tribenuron-methyl, and Express Pro. For many special crops, and even canola, though, the choice narrows down to Amitrol and CleanStart.

“CleanStart leaves little or no residue to cause trouble in crops like chickpea, canola, lentil, field pea and flax. From the work I’ve seen, CleanStart seems safe on most crops,” says weed scientist Eric Johnson at Agriculture and Agri-Food Canada at Scott, Saskatchewan.

CleanStart contains the active ingredients glyphosate and carfentrazone. It is a contact herbicide, and can be used prior to seeding as a pre-seed burndown. Johnson says some growers are less than happy with its performance, but he says if it is applied properly it performs well. 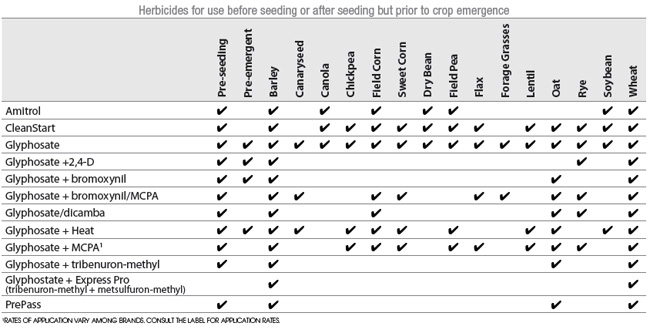 CleanStart should be applied when volunteer canola is small. For non-Roundup Ready canola volunteers, it can be applied to actively growing weeds up to 10 centimetres in height. However, in the case of a Roundup Ready volunteer canola, CleanStart should be applied at the one- to three-leaf stage because only the carfentrazone active is controlling the volunteer: the glyphosate component does not contribute to the control of the glyphosate-resistant biotype. Applying CleanStart at the earlier growth stages of the volunteer canola (one-leaf stage) will provide more consistent results than applying at later stages of development.

Following label guidelines for application is also very important to the performance of CleanStart. Since carfentrazone’s activity is through contact, good coverage of the weeds is required. This is achieved with high water volumes of 10 gallons per acre, and a nozzle and pressure combination that delivers a medium droplet spray quality.

“For growers using a lower water volume and coarser sprays, it is hard to get CleanStart to work,” says Johnson. “It is really sensitive to application parameters.”

Another pre-seed herbicide that can be used prior to some special crops and canola is Amitrol. Amitrol has been around for quite a few years, and is making a comeback of sorts. While it is still fairly expensive, Johnson says, it provides a good option.

“I would like to do some work on Amitrol application rates and tank mixes to see if we could reduce the cost per acre,” he notes.

Heat is not registered as a pre-seed application prior to canola, dry beans, flax, forage grasses or rye.