The choice of cover crop species can affect the longevity of parasitoid wasps. 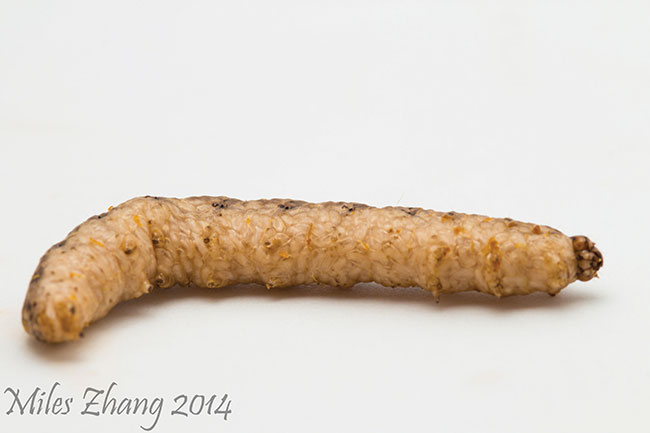 A cutworm parasitized by C. bakeri. Hundreds of wasp larvae can be seen beneath the caterpillar’s skin. Photo courtesy of Miles Zhang.

Copidosoma bakeri is a species of parasitoid wasp; as with all the wasps in its genus, it’s the enemy of Lepidoptera (butterflies and moths), including cutworms.

Its mode of parasitizing cutworm species is more than a little grisly: it lays an egg inside a cutworm’s egg, and the wasp’s egg clones itself 100 or more times inside its host, producing larvae that eat from the inside the caterpillar. More than 100 wasps can emerge from a parasitized cutworm, and given the opportunity, each female can go on to parasitize other cutworms.

But what are the best ways to deliberately deploy parasitoid wasps as a biocontrol measure against crop pests? For example, the non-host food preferences of C. bakeri – in other words, the species of plants that might attract the wasp to a field and keep it alive long enough to parasitize pests in the field – are poorly understood.

A recent study led by University of Manitoba PhD student Udari Wanigasekara sought to fill in some of the gaps, investigating cover crop colour, odour and species preferences of C. bakeri.

“Cutworms are economically important pests of multiple field crops, but are difficult to control with insecticides,” Wanigasekara writes in the paper’s abstract. “Biological control with native parasitoids may offer a sustainable alternative for pest management. Cover crops improve the availability of resources required by parasitoids to increase their effectiveness as biocontrol agents.”

Wanigasekara and her collaborators tested nine different cover crop species and looked at how these plant resources impacted survivability and longevity of female wasps.

What they found was that both fed and unfed wasps were most attracted to yellow-flowered plants in the Brassica family, including canola, mustard and camelina – more than white (buckwheat) and green (plant leaves).

Costamagna says the team found that the nectar of some plants can increase the longevity of the parasitoids. “If we provide this nectar in the vicinity of the fields that are affected by cutworms, we really increase the chance of the wasps to control the cutworms,” he explains. “They prefer yellow flowers over white, and they prefer yellow or white over green, so they’re using visual cues to locate the flowers.”

The study also found that wasp life expectancy was increased when the wasps were provided with floral “resources” versus no floral food sources, and that later planting dates and mixed-species cover crop plantings resulted in flowering that coincided with wasp emergence.

Wanigasekara says increasing plant diversity for diversity’s sake isn’t the best strategy when it comes to pest management. Rather, plant species should be selected based on the “specific needs and preferences of the biocontrol agent.”

“In modern agroecosystems, much of the native flora and fauna has been altered, and this creates an unnatural system that decreases the diversity and efficiency of natural enemies and allows pests to flourish,” Wanigasekara says. “Availability of nectar/pollen has become the main limiting factor for parasitoids due to simplification of agriculture fields, whereas overwintering sites and refuge zones are the main limitations of predators.” 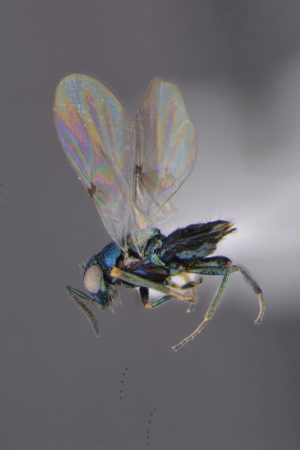 An adult Copidosoma bakeri. More than 100 C. bakeri wasps can emerge from a parasitized cutworm. Photo courtesy of Udari Wanigasekara.

Wasp lifespan
Costamagna says C. bakeri wasps are extremely effective parasitoids in terms of their potential to reproduce – but they’ll be able to do more the longer they live.

“They come with the egg complement when they emerge as adults, and they don’t need to eat much to develop eggs. Other types [of parasitoid wasps] develop eggs as they age, so if you don’t have enough food they produce less eggs. So that’s one advantage – if these parasitoids emerge in an area with plenty of hosts, they can quickly parasitize them all.

“They need to do this before they die, so that’s where the flowering diversity comes in. The more food they have, the farther they can fly, and the more they can use their full complement of eggs,” he explains.

Wanigasekara says that even though the study found camelina is attractive to C. bakeri, it doesn’t flower long enough to provide resources to the wasp over the longer-term.

“Thus, planting in mixtures or later planting dates for individual cover crops and for mixtures would increase the overall flowering duration by overlapping the complementary flowering periods of individual species – that may provide a better phenological match with C. bakeri emergence,” she says.

“Habitat diversification can be a valuable tool for integrated pest management practices and cover crops may offer an attractive alternative to field margin plantings given the dual economic and ecosystem benefits.”

Before specific recommendations can be made to producers, though, Wanigasekara says more research, including field tests, needs to be done.

Costamagna says there are plenty of challenges ahead for researchers studying parasitoid wasps.

To name one example from this particular study, Costamagna says the team faced hurdles in collecting an adequate number of samples. First, they had to find fields that were affected by cutworms; then they had to find the cutworms, and rear them in the lab, and only a fraction were parasitized.

Costamagna is collaborating with University of Manitoba entomologist Jason Gibbs on a flowering strips project in field margins, looking at the effects of these strips on multiple species of beneficials, including pollinators and ground beetles. So far, he says, the results are variable but encouraging.

“We have a lot of work ahead.”


Related
Scouting for cutworms: how to identify and what you should know
Identification and management of cutworms made easy
A cut above the cutworms below
Flea beetles and cutworms found in Manitoba fields