Crop rotation allows you to make the most of Mother Nature's ability to control plant diseases. 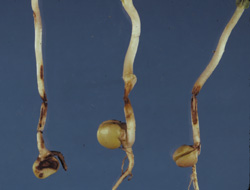 Turkington, who specializes in cereal diseases, says that crop rotation not
only promotes disease management, but it also facilitates crop health and helps
with weed and insect management, so you are setting the stage to produce a healthy
crop. He says that if you combine that with strategies like using good quality
seed, seed treatment and balanced fertility – not too much nitrogen and
no nutrient deficiencies that can predispose crops to attack – then the
sum of the parts is often better than the effect of each individual factor on
its own.

Whether crop rotation will help to control a specific disease depends on the
characteristics of that disease. For instance, rotation does not control seedborne
or windborne diseases. Turkington notes, "Crop rotation really shines where
the source of the disease is primarily from the field itself, either as infested
residue in the soil or on the soil surface, or as specialized pathogen resting
structures."

Crop rotation is a natural form of soil or soil surface disinfestation. It
essentially allows Father Time and Mother Nature to disinfest the field of the
pathogen. In the case of diseases like take-all in cereals, or scald and net
blotch in barley, or blackleg in canola, the pathogen survives on infested crop
residue. As long as that crop residue is there, the pathogen has a place to
persist and be available for the next time a host crop is grown. As the rotation
is extended, the residue starts to decompose due to the normal organisms present
in the soil or at the soil surface. Once the plant tissue is gone, many plant
pathogens die out very rapidly. In addition, if the pathogen is at the soil
surface, often ultraviolet (UV) radiation and freeze-thaw cycles can help to
eradicate it or at least reduce its viability.

Where resting structures are involved, the disinfestation process may take
longer. Turkington says that some pathogens produce specialized resting structures
that can survive in the soil for one or several more years. For instance, the
common root rot pathogen produces specialized resting spores, and sclerotinia
in canola produces sclerotial bodies. In an extended crop rotation, various
organisms in the soil attack the resting structures and eventually they lose
viability. Infested plant tissues that are resistant to decay can also help
pathogens to persist for longer periods of time.

"For example, the blackleg pathogen of canola typically persists in old
canola root pieces, which are woody in nature and can take longer to decompose.
Thus, at least a three to four year rotation is recommended for canola to help
reduce the risk of blackleg," explains Turkington.

Planning a rotation
If you are planning a crop rotation with disease control in mind, some of the
key elements to consider are current disease issues on your farm, crop diversity,
length of rotation and field location.

Both the disease history of your farm and the susceptibility of the crops you
would like to grow are important, explains Dr. Ron Howard, a plant pathologist
with Alberta Agriculture, Food and Rural Development at Brooks. "If you
had a serious disease issue with the crop that you're just taking off, you obviously
don't want to do anything to further increase the levels of that disease in
that field. So you want to select a crop that is not going to allow the pathogen
to build up further. If the following crop is susceptible to some of the diseases
in the previous crop, even though they might have been at low levels in the
previous crop, then you might want to take that into consideration when selecting
rotational crops."

Regarding crop diversity, Turkington says, "Ideally you want to introduce
as much diversity as possible by growing completely different crop types. For
example, very few if any cereal pathogens will readily overwinter and survive
on pulse crop or canola residues. So, growing barley or wheat on canola residue
or field pea residue would be a very good option."

Howard, who focusses on diseases in forages, pulses and specialty crops, explains
that rotations for controlling diseases in pulse crops can present special challenges.
He says, "Pulse crops are subject to several diseases that are common in
other crops. For example, there is a complex of root rot and stem rot diseases
caused by fungi such as fusarium, rhizoctonia, pythium and sclerotinia that
affect crops like canola and that share pulse crops as a common host. So, if
you had a serious root or stem rot problem in your canola, some of those causal
species could later cause a problem in pulse crops."

Howard notes that pulse crops are broadleaved crops and generally he recommends
rotating them with crops that are not broadleaved, such as cereals, grasses
and corn. While that is the ideal, the reality is the prices for a lot of those
commodities have been low and, therefore, some growers have been reluctant to
use them. If that is the case, then you want to at least select non-legume crops
to rotate with pulses. Other legume crops, such as alfalfa and clovers, may
share diseases in common with pulse crops. So, for example, in southern Alberta,
he says that growers might like to try crops like sugar beets, potatoes or some
other specialty grains and oilseeds in a rotation with pulses.

In general, the longer the interval between host crops, the better for controlling
a disease. For most diseases, leaving at least two years between host crops
tends to substantially reduce the amount of infested residue and specialized
resting structures.

Field location is an issue for wind-borne diseases that can develop very rapidly
during the growing season, such as ascochyta in chickpeas or lentils, mycosphaerella
in field peas, and some of the leaf diseases in cereals, like net blotch in
barley, explains Turkington. "You may have a small amount of spores from
a pathogen of the previous crop being blown into the adjacent field. If you
have highly favourable weather conditions and the crop variety is highly susceptible,
the disease can develop quite rapidly."

Under conditions where windborne diseases exist, avoid planting a highly susceptible
crop in a field right next to a field where a high disease level occurred the
previous year.

When an extended rotation is not an option
Factors like economics and the need for on-farm feed may cause a producer to
grow one crop continuously or to use a very short rotation.

Turkington often gets asked, 'What if I want to grow continuous canola, or
barley or whatever, or have a short rotation of only one year?' His response:
"Rotation is still going to be a very effective tool, so if there is any
way to add time between these crops, do that. If it's not possible, then you
have to ensure that the rest of your crop and disease management package is
up to snuff. You have to look carefully at a variety with a very good package
for disease resistance, make a careful choice of high quality seed, be very
careful on the fertility program and avoid seeding too deeply. You also need
to do regular field scouting to stay aware of what's developing and then use
that information either for the current growing season or for planning out a
future strategy," says Turkington.

For producers who are growing continuous barley as feed for their livestock
operation, some options are changing the barley variety or considering other
crops that might fit that system like triticale or oats for silage.

Howard says, "Pulse growers in southern Alberta generally have more cropping
options than pulse growers do in the other areas, by virtue of the availability
of irrigation and the higher heat units. We see, for example, sugar beets, potatoes,
timothy and vegetables being grown in rotation with pulse crops, along with
the traditional cereal, oilseed and forage crops. Elsewhere in Alberta, the
spectrum of crops that you may include in a rotation with pulses is narrower.
Sometimes that forces growers to use crops where common diseases can be an issue.
But if you anticipate this, sometimes you can have other tools at hand, such
as crop protection products or resistant varieties, that may help circumvent
serious problems."

In the end, crop rotation is an important way to use Mother Nature to control
crop diseases. Combining rotation with other strategies, such as using resistant
varieties, high quality seed, balanced fertility, seed treatment and field scouting,
gives the flexibility to prevent significant yield and quality losses. If an
extended rotation is not an option, other disease control strategies become
more critical. -30-

Emerging disease issues
Keeping an eye out for new disease concerns in your area can help in planning
your disease management strategies. Turkington and Howard list several diseases
to watch for:

Fusarium head blight, a devastating disease
already in Manitoba and Saskatchewan, is starting to move into southern Alberta.

Stripe rust, which can cause yield loss
in wheat, was confined mainly to southern Alberta and the southwestern corner
of Saskatchewan, until recently: now it is appearing in central Alberta. Many
of the popular wheat varieties are moderately or highly susceptible to this
disease.

Club root in canola appears to be increasing
in and around Edmonton. This disease is favoured by very wet conditions. The
pathogen can be very long-lived in the soil.

Different strains of blackleg are starting
to cause problems in canola varieties that previously were fairly resistant
to that disease.

For pulse crops, new strains of existing prevalent diseases could be an issue.

Soybean rust has moved into the southern
US and has the potential to move northward and perhaps eventually infect soybean
crops in southern Ontario and Manitoba.

Pulse crop diseases already in Manitoba and eastern Saskatchewan could move
into Alberta. Possible examples include two species of anthracnose
(a foliar and pod disease), one affecting lentils and the other affecting dry
edible beans. -30-