A group of intrepid farmers and researchers are working on what could be the next evolution in conservation tillage. Called Controlled Traffic Farming (CTF), it is a crop production system in which the crop zone and traffic lanes are distinctly and permanently separated. In practice, it means that all implements have a particular span or multiple of it and all wheel tracks are confined to specific traffic lanes. Permanent wheel tracks (tramlines) are established in the field where all machinery travels year after year.

“Controlled traffic is widespread in Australia, and is gaining popularity in Europe and North America. We want to help Alberta farmers assess the practice to see if it makes management sense here, and to help reduce the risk that farmers may encounter when converting to controlled traffic farming systems,” Peter Gamache, project leader of Controlled Traffic Farming Alberta (CTFA), says.

In 2014, CTFA entered its fourth year as a joint project with the University of Alberta’s department of renewable resources, and is funded primarily by the Alberta Crop Industry Development Fund (ACIDF). The Alberta Canola Producers Commission provided funding for 2014-15. Additional funding and help comes from CTF partners Farmers Edge, Beyond Agronomy, Point Forward Solutions, AgViser Crop Management and Paradigm Precision, and managing partner Agricultural Research and Extension Council of Alberta. The farmer co-operators at seven sites in 2014 have made significant investments and undertaken additional risk to implement CTF on their farms.

In 2014, random traffic was simulated on field scale plots on a CTF field at each co-operator location. The simulated random traffic results in approximately 50 per cent of the soil surface being tracked versus the CTF check where about 15 to 20 per cent of the soil surface is being tracked. The treatment plots match the combine header or swather width for each co-operator. The plots will be repeated for three years and will feature the same treatments in the same locations.

CTFA is evaluating weed communities, crop emergence, water infiltration and yield, and will conduct an economic analysis to determine if CTF is more profitable than random traffic farming.

Gamache says to date, the CTF systems are performing well in extreme climate conditions, and are increasing the resilience of the cropping systems.

“While we are not yet seeing consistent and significant yield increases, the advantages of the system are proving to be valuable. The timeliness and efficiency of operations is a significant benefit. The ability to do accurate, reliable on-farm research is valuable. The precision of a CTF system opens up a whole new world of agronomic and economic opportunities such as in-crop nitrogen application, on-row fungicides and precision seed location,” Gamache adds.

Time will tell if CTF will help move conservation tillage to the next level of sustainable farming. Learn more at controlledtrafficfarming.org. 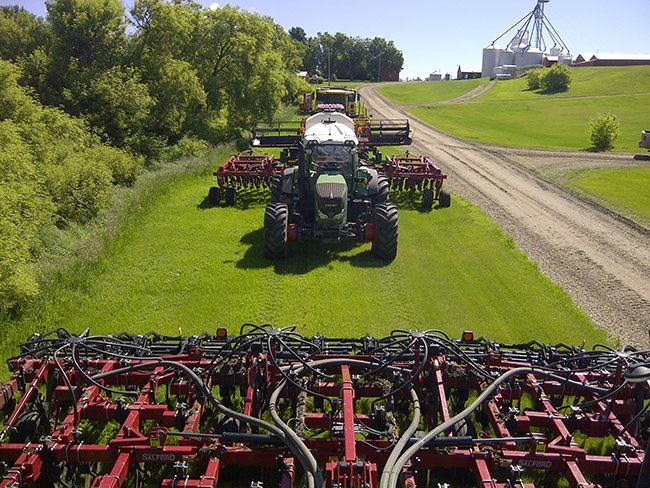 With CTF A group of intrepid farmers and researchers are working on what could be the next evolution in conservation tillage.