In wheat, in canola or in pea, the message is the same: control weeds early for highest yields. Those messages have been repeated in the past and now new research highlights the need to repeat that same message with respect to wheat crops. 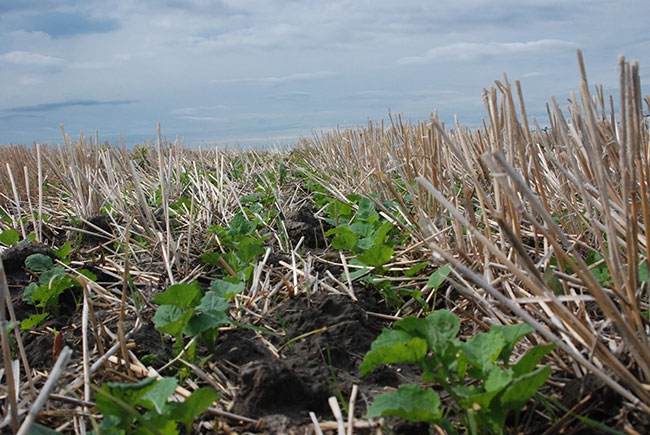 “We’ve seen a bit of a mind shift among growers that they are waiting a little longer to spray. Active ingredients have become so much better in terms of windows of application and effectiveness, so we’re seeing a delay in application because growers want to try to get all the weed flushes,” says Chris Mansiere, agronomic development cereals manager with Bayer in Saskatoon.

Bayer conducts its own agronomic research to help growers get the most out of their products. One recent trial looked at the effect of time of weed removal with either Velocity or Varro on wheat yield. At 78 sites, there was a seven per cent increase in grassy weed control when the products were applied up to early tillering (one full tiller), compared to later application when grassy weeds had two or more tillers.

Another trial at six locations compared Velocity, Varro, Everest, Simplicity and other grassy weed herbicides. Averaged over all the herbicides, early grassy weed removal (up to one tiller) had a 10 per cent yield advantage over a late application (two tillers to node), and a 40 per cent increase over the untreated check.

“Early season grass competition can steal a lot of yield. Spray earlier than you think. It doesn’t cost any more and you get a greater dollar return and probably a cleaner field,” Mansiere says.

These results are similar to previous research conducted by John O’Donovan when he was at the Alberta Environmental Centre in Vegreville, Alta. That research looked at the effect of wild oat time of emergence on yield loss in wheat. For example, with 10 wild oat plants per square metre (one per square foot), yield loss would be 10 per cent if the wild oat was one leaf stage ahead of the crop, six per cent if it was at the same stage as the crop, and three per cent if the wild oats were one leaf stage behind the crop.

Same story in canola…
Multiple research projects by Neil Harker, a research scientist at Agriculture and Agri-Food Canada (AAFC), and colleagues in Lacombe, Alta., stretching back over a decade also found early weed removal produced higher yield in canola. One study conducted from 1998 to 2000 looked at the effects of seeding rate, herbicide timing and hybrid canola on integrated weed management and yield. Combining the better cultivar (an InVigor canola compared to an open-pollinated variety) with the highest seeding rate (200 seeds per square metre), and the earliest time of weed removal (two-leaf stage) led to a 41 per cent yield increase compared with the combination of the weaker cultivar, the lowest seeding rate and the latest time of weed removal. The same factors provided the highest level of weed control and lowest weed biomass.

Harker led another research project in 1998 through 2000 looking at herbicide timing on weed management in the three different herbicide-resistant systems: Clearfield, InVigor and Roundup Ready. Timing of weed removal had the greatest effect on canola yield, with weed removal at the four-leaf stage giving the highest yields in most cases. He says the consistency of monocot weed control was usually greater for Roundup Ready than for Liberty or Clearfield systems. Greater dockage and weed biomass variability after weed removal at the six-leaf stage or after low herbicide rates suggests higher weed seed production, which could constrain the adoption of integrated weed management practices in subsequent years.

Other research by Harker and his colleagues at 10 sites in Western Canada in 1999 and 2000 looked at time of weed removal in Clearfield canola. In eight of 10 cases, yield decreased linearly as herbicide application was delayed beyond the one- to two-leaf stage of canola.

…and the same story in pea
Even earlier AAFC research in Lacombe and Lethbridge from 1996 through 1998 looked at time of weed removal in field pea. Wild oat and tartary buckwheat were removed from plots by hand-weeding at weekly intervals after pea emergence and plots were then maintained weed-free for the remainder of the growing season. Harker reports the beginning of the critical weed-free period was usually at one or two weeks after pea emergence.

“In terms of ranking agronomic practices for their impact on optimal yield, I believe that early weed removal ranks second after the most important factor: soil fertility. Perhaps crop establishment might rank similarly to early weed removal,” Harker says.


Related
Give canola a fighting chance by taking out weeds early
Hit weeds early, especially if pre-seed burndown is missed
Keeping weeds off balance
The worst weeds in Manitoba