According to Bruce Murray, DeKalb agronomist for Monsanto at Carman, Manitoba, prevention is the best approach. When RR canola is getting ready to harvest, try to swath at the right time so that shatter loss is minimized. Then at harvest, set the combine to minimize how much seed hits the ground, Murray suggests.

That advice may not be practical in some situations, but “if I had a field I knew was going to corn in the near future, that might be one I’d really pay attention to,” he adds.

Myles Robinson, Manitoba sales manager with NuFarm Agriculture Inc., says a well-planned crop rotation can help reduce the issue of RR volunteers. “A good rotation will help you avoid backing things up too much in terms of your Roundup Ready crops,” he notes.

The next opportunity to reduce problems is after harvest on the RR canola field, which may need tillage for weed control. If it does need tillage, do it as late as possible and as shallow as possible.

“Most years, volunteer canola will die when exposed to heavy frost,” says Murray. “Delay your tillage until you get a flush of the canola growing. And, don’t bury the seed or you may create a seed bank that will cause years of volunteers. Leave them exposed on the surface. The surface is very hard on that seed, and you will get a lot of losses in that population.”

Pre-seeding burnoff
When you get into the RR corn year, and if you know the field will have RR volunteers, plan to control the problem as early as possible with a good pre-seeding burnoff. Burnoff does two things: It knocks out weeds that had weeks of growth ahead of planting, and it forces the second weed flush into a uniform growth stage so that it is easier to control in the early crop.

“A tank mix of glyphosate with something like Heat would be wonderful,” says Murray. “Heat is a Group 14 product from BASF. We’re seeing good control of volunteers early on, and some residual control with Heat.”

Robinson notes if you are trying to remove Roundup Ready canola volunteers before seeding a sensitive broadleaf crop, a good existing product to consider is CleanStart. “CleanStart is the only product that you can use safely before broadleaf crops to remove tough volunteer crops that are Roundup tolerant.”

Growers have more flexibility if trying to remove RR canola volunteers before seeding a cereal. A typical solution for that scenario is a tank mix of glyphosate with a product such as 2,4-D.

BlackHawk is a spring burndown product, to be used with glyphosate to provide enhanced broadleaf weed control through both contact and systemic activity. BlackHawk contains both Group 14 and Group 4 components (carfentrazone and 2,4-D ester) to help in the battle against resistance development.

KoAct herbicide is a burndown product for spring, summerfallow or post-harvest use. It controls many broadleaf weeds, including canola volunteers, prior to seeding wheat and barley. It can be used either alone or with glyphosate. KoAct contains both Group 2 and Group 4 components, using two modes of action to help in the battle against resistance development.

“Blackhawk is designed specifically for use before seeding cereal crops, like wheat and barley, and ahead of soybeans. For this purpose, corn is considered a cereal crop,” says Robinson. “With two modes of action, it’s going to give you better, quicker control of volunteer canola.”

Robinson says NuFarm has spent two years developing Blackhawk especially for growers in Manitoba to throw in sprayer tanks with glyphosate, to provide the strength they need to clean up the glyphosate-resistant volunteers ahead of cereal crops. “It’s going to give you better activity in cooler spring conditions when you might be having challenges with things like buckwheat and kochia along with your Roundup-ready canola volunteers,” he says.

Blackhawk is the first package to contain both active ingredients. NuFarm’s packaging of the ingredients makes them easier to use in a tank mix with glyphosate and provides a competitive price point. Blackhawk will retail as an 80-acre case for about $5.50 per acre.

In-crop control
After the RR corn and any new weeds emerge, there will be two or three weeks to control the weeds. Options include 2,4-D, bromoxynil products and, cautiously, MCPA.

The options for volunteer control in corn will vary with the hybrid variety and are open until the seedling crop is in the six-leaf stage, notes Murray. Look for the auxin sensitivity rating for your chosen hybrid (auxins are a class of plant hormones that play a role in co-ordination of many growth and behavioural processes in the plant’s life cycle and are essential for plant body development). The information – which should be available from the seed provider – may be a factor to consider when selecting the corn, notes Murray.

“We have low rate 2,4-D Ester up to the four-leaf stage. After that, we look at something like Buctril M. After six leaves, it’s time to go fishing,” he says.

The risk with both products is crop injury. The active ingredients are synthetic growth hormones (auxins) that become more damaging to the crop with increasing heat and moisture. Some evidence from Ontario suggests that large day-night temperature swings also may increase crop injury.

“You can go in with something as simple as 2,4-D,” says Robinson. “It’s fairly critical to follow the crop staging. You need to control most of those weeds at the two- to four-leaf stage with the 2,4-D. You want to do that when your crop is four to six inches tall, and before the six-leaf stage. You can also go in with MCPA Amine, at the same type of staging.”

Straight bromoxynil is another option, he says, with a little bigger application window. It’s best to aim for the four-leaf stage of the corn for a bromoxynil application, but it can go on as late as the eight-leaf stage.

Because bromoxynil is a contact herbicide, it does require more water. The water volume needs to be between 17 and 26 gallons per acre, as compared to 10-gallon rates for 2,4-D and MCPA products.

According to Robinson, there are some slight differences in crop tolerance and in weed response between the MCPA Amine and MCPA Ester. “You don’t want to put MCPA Ester on corn because it’s hotter on the corn and you have the potential for crop injury,” he says. “But it’s OK to put MCPA Amine on it.”

Murray says both MCPA Amine and MCPA Ester can be hot on corn. “I would like to emphasize that any of these auxins will cause damage (even when applied early) if the environment promotes rapid corn growth (hot and humid). When these conditions are present, it is best to avoid spraying.”

“You really have to pay attention to your growing conditions,” notes Murray. “If you can avoid hot, humid conditions when spraying those products, that will help.” 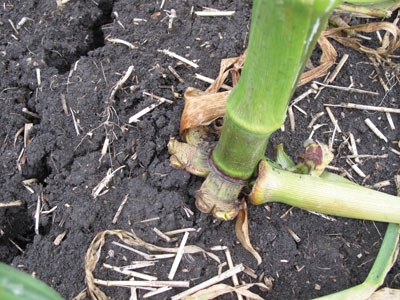 Damage to corn roots from 2 Prevention and control are important factors in ensuring you plant Roundup Ready corn into a field that’s free of Roundup Ready (RR) volunteer canola.