Since the widespread adoption of both Roundup Ready (RR) corn and RR canola, growers have been struggling with controlling volunteers. Until 2015, controlling RR volunteer canola in RR corn was possible, but with some potential crop tolerance issues. From 2011 to 2013, Wilt Billing, agronomist with DuPont Pioneer, looked at some commonly used herbicides in corn that specifically targeted glyphosate-resistant volunteer canola.

“The herbicides were all being used by commercial growers and the products all had potential harmful implications,” Billing notes. He has a special interest in weed control as DuPont Pioneer sells RR corn and Billing wanted to help growers get the most out of their corn genetics.

Billing looked at five different herbicide treatments on four industry-leading Pioneer and other brands of RR corn hybrids. Glyphosate alone was used as a check to assess herbicide tolerance and weed control.

Herbicides were applied at the V3 stage of corn growth (see Table 1). Treatments were replicated four times over three years. Herbicide injury scores were recorded at three to five, seven to 10, and 21 to 24 days after post-emergent herbicide application. Brittle snap, test weight, yield and per cent moisture content were also observed. In the glyphosate-only treatment, after herbicide application any volunteer canola plants were removed in order to have a valid yield and test weight comparison.

Dicamba, 2,4-D and MCPA amine are Group 4 herbicides that work to produce abnormal growth in weeds. Bromoxynil is a Group 6 contact herbicide. All herbicides are registered on corn.

“I wanted to see if the Group 4 herbicides were impacting corn growth and compare that to bromoxynil,” Billing says. “Over the three years, we saw some consistent trends.”

Severe and persistent herbicide injury resulted from 2,4-D on all hybrids. 2,4-D showed the highest brittle snap in all hybrids (see Table 2). On average 2,4-D reduced yield by 13.5 per cent and lowered test weight by 4.4 lbs/bu.

“All the bromoxynil treatments looked fairly good. It wasn’t inhibiting growth of the corn crop. There was some flash burn, but within two to three days after application, the corn outgrew the minor injury and was healthy. With Group 4 products, it set the corn back seven to 12 days. There was often a staging difference at maturity,” Billing says.

When applying bromoxynil to corn, Billing recommends application during warm temperatures but not at temperatures greater than 27 C. High water volumes of at least 10 to 15 gallons per acre are recommended to reduce crop stress, and applications should be avoided during or immediately following environmental stress on the corn crop.

New registration makes control easier
Since Billing conducted his research, a new active ingredient has been registered in Western Canada for use on field and sweet corn to provide better grassy and broadleaf weed control. The active ingredient is topramezone – a Group 27 herbicide – sold by BASF as Armezon and by UAP as Impact. Volunteer canola is not yet on the label, but control at the one- to six-leaf stage has been submitted for addition to the label.

“I’ve looked at Armezon and Impact in demonstrations on commercial fields and I think these herbicides will become leading products for use on corn crops in Western Canada,” Billing notes. “[They do] a very good job on broadleafs and I haven’t seen any crop injury. It looks very safe on the crop.”

Tropramezone should be tank-mixed with glyphosate for application to RR corn and can be applied from the one- to seven-leaf stage. The tropramezone and glyphosate tank-mix provides control of all weeds on the glyphosate label, plus it provides improved control of barnyard grass, green and yellow foxtail, chickweed, lamb’s quarters, ragweed, smartweed, redroot pigweed and wild mustard.

DuPont Pioneer is also looking at some of the chemistries registered on corn just south of the border in North Dakota, and the company hopes to be able to work with other pesticide companies to support registration efforts in Western Canada. 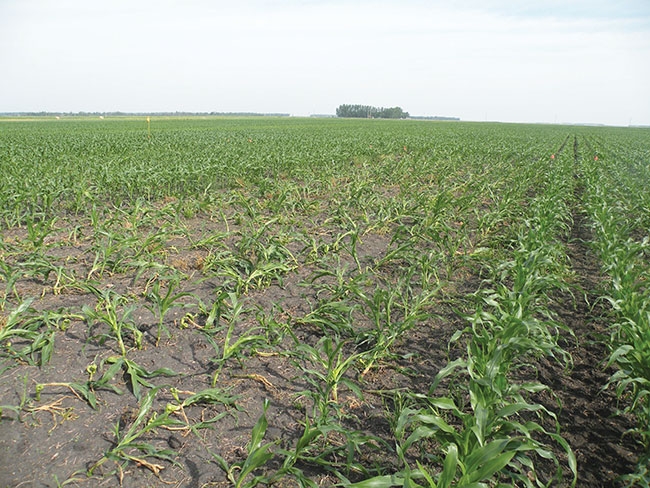