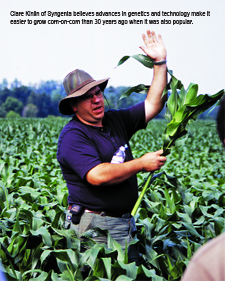 For years, conventional wisdom has followed a single focus: ‘Rotation, Rotation, Rotation’.
Research has confirmed that the longer the rotation, the better the yields, the less the diseases or pest concerns and the better for overall plant and
soil health.

Now, a not-so-new direction in corn production is being considered, gaining acceptance with more advisors and agronomists. Continuous corn or corn-on-corn is actually making the rounds as a plausible management choice at a time when there are more marketing options and improved hybrid genetics. Seed companies are rushing new lines to market, complete with triple stacks and improved germplasm. At the same time, marketers and growers are trying to gauge the direction of the industry as corn production tries to keep pace with demand from the biofuels industry amid some economic instability taking shape in the US.

Against this backdrop is the debate surrounding continuous corn and corn-on-corn decisions. Some distinguish between the two as corn-on-corn being a two year phenomenon while others insist continuous corn can be defined as anything longer than two or sometimes three years. Regardless, the bottom line on this trend is that the Ontario corn sector is likely to see more corn being planted in the coming years, depending on market and other economic drivers.

The history of corn-on-corn and continuous corn is well documented, dating back to the 1970s and early ‘80s. “Back then we grew continuous corn because there was more money than growing crops in rotation,” recalls Pat Lynch, Cargill agronomist. “What has changed is our herbicide programs and some of the other GMO technologies are making corn after corn easier.”

When asked if continuous corn is a viable management practice, Lynch points to those growers in the US who have won awards for the highest yields. Often those were on fields that were continuous corn. Lynch comments on the merits of corn-on-corn versus soybeans after soybeans “You’re working on a very different species in as much as the root system is much better adapted to produce corn than the root system of soybeans is to produce soybeans,” he explains. “The other reality is disease resistance packages bred into hybrids of corn are much better than the disease resistance packages bred into soybean varieties. Some of the soybean diseases that we’re working against are no longer an issue or will be near the issue in corn as they are in soybeans.”
Lynch also notes that growers must take a look at their own fields, soil types and management practices to determine the options that best suit their needs. The first order of business is to select the best field for continuous corn and the heavier the soil, the shorter the rotation. “Until you get to the extreme of a sandy soil, without water, then you have to be selective as to how much corn you’re going to grow,” says Lynch, adding that the recent world’s highest corn yield winners were on silt loam soils. “They’re the ideal soils for continuous corn, the next would be a sandy loam that has good water and we do have some of those in Ontario.”

Another factor for Lynch is the very few acres of corn that are no-till, a very small percentage of which is corn after corn. “If growers are planting corn after corn, there should be some primary tillage this fall,” advises Lynch. Shallow mouldboard plowing is one option and a chisel plow or other tool if volunteer corn is an issue. “That’s when hybrid selection is important, and we suggest choosing a Roundup Ready hybrid in the second year, provided the previous crop was non-Roundup Ready. If it was Roundup Ready, then a Liberty Link hybrid should be the choice to remove any volunteer corn if it’s not plowed down with a mouldboard plow.”

Other management considerations
Seizing on the ‘best management’ approach, Clare Kinlin echoes Lynch’s recommendation about using the best fields for continuous corn; the better the field conditions, the more resilient or forgiving that crop will be. “A tougher field with tough conditions may be able to get three or four strikes against them. With a really good field, you can get seven or eight strikes against them before you have to do anything,” says Kinlin, eastern Ontario based field agronomist with Syngenta Seeds.

Another primary consideration he cites is residue management. “When you’re planting seed into that trench, you have to get those stalks out of the way, whether it’s conventional or no-till, it doesn’t matter, you have to get that furrow clean.”

Clearing leaves and stalks out of the back of the combine is another concern for Kinlin. When it comes to continuous corn or corn-on-corn, he says there is a lot of talk about combine spreaders and getting the chaffe easily out the back. “If you’re growing corn-on-corn, you have that much more biomass all the time.”

Genetics better, not just GMO
Further proof that the genetics are improving could be seen in the overall impact of 2007’s dry summer. According to Eric Schimek, agronomy information manager with Pioneer Hi-Bred, one need only consider how a continuous corn crop might have survived in the 1970s or ‘80s, given the drought-like conditions. “Consider the type of drought that we had across the main corn growing parts of the US and Canada this year, if you had these same conditions 20 or 30 years ago, you’d probably have had complete crop failure,” says Schimek, adding that such a scenario is unlikely given the breeding enhancements of the past few decades. “Drought tolerance is a complex issue and one of many things, like root strength and stalk strength, that goes into breeding modern corn hybrids. Plus, the addition of new biotech traits over the last decade or
so has likely given an an added amount of protection.”

Yet, which are more important: the genetics or the grower’s management skills? At first glance, Schimek acknowledges that it is hard to decide on the importance of one over another. The genetic traits are a tool, however, their success depends greatly on the management skills of the grower. In addition to hybrid selection, residue management and tillage practices, Schimek points to fertilizer decisions and the need for better disease packages, especially in a second year or continuous corn field.

“I don’t like to say that management seems more important than the genetics,” he says. “Today’s hybrids bring forward a lot of performance benefits but they still require proper management. You can’t just throw them out there. You’re planting corn-on-corn for the reason that you’re trying to take advantage of the market, so be sure to do it right so you can really
take advantage and maximize your bottom line.”