Oats can be a good rotational crop following alfalfa under irrigation. They can be grown relatively cheaply without nitrogen (N) fertilizer, have low seed costs and have very high yields. In years when oat prices are high, they can be a good choice.

“Our oat yields on first year alfalfa breaking were almost 250 bushels per acre under irrigation,” says Gary Kruger, irrigation agrologist with Saskatchewan Ministry of Agriculture at Outlook, Sask. “If a grower wants to take a holiday from high input costs, then oats can be a good option on alfalfa breaking.”

Kruger conducted a demonstration research trial in 2013 on one- and two-year alfalfa breaking to help determine the yield response of oat to different N fertilizer rates. The trial consisted of first year alfalfa breaking that was terminated in the spring with glyphosate, and second year alfalfa breaking with oats sown on canola stubble. The plots were sown with a no-till drill, and two oat varieties were planted: a milling variety, Triactor, and a forage variety, CDC Haymaker. The oats were fertilized at 0, 25, 50, 75, 100 and 125 kg of N per ha (kg/ha x 0.89 = lbs/ac). A split plot design was used, randomized and replicated four times.

“Dryland farmers might doubt that you can grow alfalfa on first year alfalfa breaking without nitrogen, but with irrigation and warm soil temperatures, the soil is wet enough and the microbes active enough that you get good mineralization of N from the organic matter,” explains Kruger. “On dryland, you might not get that release unless you have very good early season rainfall that will replenish the soil moisture.”

Another advantage going for oats is that they are relatively low users of nitrogen. Research at Agriculture and Agri-Food Canada at Indian Head, Sask., found that even in an annual cropping system on dryland, oats rarely respond to more than 55 pounds of N on stubble.

“Oats seem to do well without a lot of nitrogen. We took out the alfalfa with a burndown and seeded without tillage, and still got enough mineralization for high yield. And even if you don’t get a high level of mineralization, oats are more forgiving because of their lower nitrogen requirements,” explains Kruger. (See Table 1.)

Kruger points out that there are other challenges to growing oats. With grain yields in the 250 bushels per acre range, there are a lot of bushels to deal with: hauling to the grain bins, having enough storage for those yields and in transport to markets. Additionally, market access may not always be close at hand.

Still, Kruger says that if growers want to diversify their rotations, oats could be a good crop to get into rotation, after one- or two-year alfalfa breaking.

“With irrigation, there are several crop options after alfalfa. I think oats is a good option if its price is favourable.” 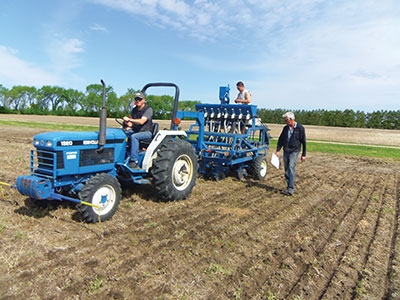