An outbreak of questions about using chloride treatments for wheat fertility and disease protection can be expected this year, says Dr. Jim Beaton, a senior agri-coach with Agri-Trend.

According to Beaton, chloride fertilizer has potential to boost yields and reduce leaf diseases – but results will be highly variable. Beaton advised farmers at an Agri-Trend event to consider putting in roughly a 30 lb/ac rate of chloride fertilizer if soil tests show chloride deficiencies in fields planned for wheat, barley or other crops such as canaryseed.

“It depends on where you are, but if you had a soil test that said there was less than 60 pounds of chloride in the top two feet of soil, there’s a pretty good chance you’ll get a response to chloride,” says Beaton, who adds that average yield responses are five to six bushels per acre, “so it pays for itself quite nicely. For sustainability, we used to say that 30 lb of K2O would roughly replace the amount of potassium being removed in the grain. If the crop is up and you’re concerned it might lack chloride, foliar sprays of ammonium chloride or magnesium chloride can be used.”

Chloride has other benefits besides an increase in yield, according to Beaton. He contends chloride will suppress disease and enable crops to withstand drought better. It’s involved in photosynthesis, it has some metabolic functions and it is very active within plant cells.

While Beaton’s comments are based mainly on research in the 1980s and 1990s, he maintains that was the heyday of looking for wheat responses to chloride in Western Canada. In the first dozen years of this century, Prairie science has pretty much ignored the subject.

However, in 2012, chloride testing for canaryseed response was reported by Bill May and other researchers at the Agriculture and Agri-Food Canada (AAFC) research centre at Indian Head, Saskatchewan.

Canaryseed response
According to a recent four-year study at sites across Saskatchewan, canaryseed appears to be more responsive to chloride fertilizer than to wheat and other cereal crops. May, a crop management agronomist with AAFC, says that approximately 9 lb/ac chloride (20 lb/ac potash) is enough to increase canaryseed yield by 10 to 30 per cent.

Visual differences between deficiency and adequate chloride fertility only appeared when seed began to fill. Canaryseed without a chloride fertilizer produced fewer seeds. All the canaryseed cultivars responded to chloride in a similar way. May says research efforts are now focused on developing a recommendation, based on a soil test, for when to apply chloride for canaryseed production.

“Chloride applications can increase canaryseed yields in Saskatchewan when 70 pounds of chloride is available in the top six inches of the soil,” he notes. “Compare this to the recommendation for winter wheat in North Dakota. They say it doesn’t need chloride when the residual level is 60 lb/ac or more in the top 24 inches. That will start to give you an idea of the chloride response differences between canaryseed and winter wheat.”

May suggests canaryseed growers apply 20 lb/ac of potash (KCL), regardless of what the soil test says, to be confident that yield response won’t be limited by a lack of chloride. “Chloride is acting more like a micronutrient than a macronutrient. Once you have enough, the response is pretty small.”

Winter wheat response
Brian Fowler, former winter wheat breeder at the University of Saskatchewan, last worked with chloride in a program that ended in 1999. His average yield benefit was about three per cent, but it did reach as high as 13 per cent in some trials.

Fowler says Northern Great Plains winter wheat varieties have a physiological response to chloride, but it isn’t consistent and there’s speculation that the response may be linked to cold soil conditions and early root growth.

Fowler tried to pin down the response, but couldn’t get it to show up on a regular basis. “Quite often, it showed up on lighter soils. The next year we wouldn’t get the physiological response with leaf spotting symptoms that we had the previous year.”

As well, Fowler makes three other points about interaction between the cereal and the nutrient.


“By deduction one would assume that physiological leaf spot is an indicator of chloride deficiency,” he says.

Chloride history
Jim Beaton retired in 1994 at Saskatoon as international director of research and development for the Potash and Phosphate Institute (PPI). In the late 1970s, Beaton learned of Saskatchewan trials where farmers were getting responses from rather modest rates of potash (potassium chloride or MOP), placed near the seed, in soils that were very high in potassium.

“The question became, if the soils are so rich in potassium how come this small amount is providing some benefit? Could this be coming from chloride, the other nutrient in MOP?”

Potassium chloride (commonly referred to as muriate of potash or MOP) is the most common potassium source. It accounts for about 95 per cent of all potash fertilizers worldwide. The nutrient composition is approximately 50 per cent potassium and 46 per cent chloride.

According to Beaton, several researchers in Western Canada and the western U.S. began looking at chloride in the 1980s as a separate nutrient. Results were mixed.

Beaton was amazed by research results with winter wheat supplemented by chloride at Oregon State University, Corvallis (funded in part by PPI). Later University of Saskatchewan trials with spring wheat, under Don Rennie, compared potassium chloride to potassium sulphate. “There was a decided benefit in favour of the chloride,” recalls Beaton.

In the 1990s, Beaton says, Cindy Grant, researcher at AAFC in Brandon, Manitoba, looked for chloride responses on two different soils in her research program. “There were some positive results. I don’t think she found any negative effects.”

Manitoba research focused on the fact that chloride is extremely variable in soils. It’s also extremely mobile in plants, and moves in readily from the soil. Results from one soil test to the next were unpredictable.

Today, it’s possible to find widespread support for judicious use of chloride fertilizer from Texas to Montana and North Dakota,” says Beaton, adding it’s even cautiously recommended on the Prairies.

In 2012, Manitoba soil specialist Pam de Rocquigny advised growers that physiological leaf spot in wheat is associated with low chloride levels in the plant and the soil. On its website, the Saskatchewan Ministry of Agriculture states that chloride in the plant is involved in controlling water loss, maintaining turgor, transportation of K, Ca and Mg within the plant, and photosynthesis. It further states that recent research has indicated that Cl assists in reducing the incidence of root diseases as well as helps reduce the incidence of some leaf spotting diseases of winter wheat, and that chloride also impacts on N uptake.

North Dakota winter wheat growers get a similar recommendation from their extension department. Chloride is considered adequate only if soil testing shows a level of 60 lb/ac or more in the top two feet.

“There’s a groundswell of fertilizer dealers and soil fertility specialists recommending around 20 to 30 lb of K2O close to the seed,” says Beaton. “Some say the response is due to potassium and others say it might be the chloride, or both. It doesn’t matter really. If I was an agronomist, I’d say put on a modest amount of MOP this spring; it can’t do any harm and there’s a chance it could be beneficial, especially if you’re aiming for maximum yields.” 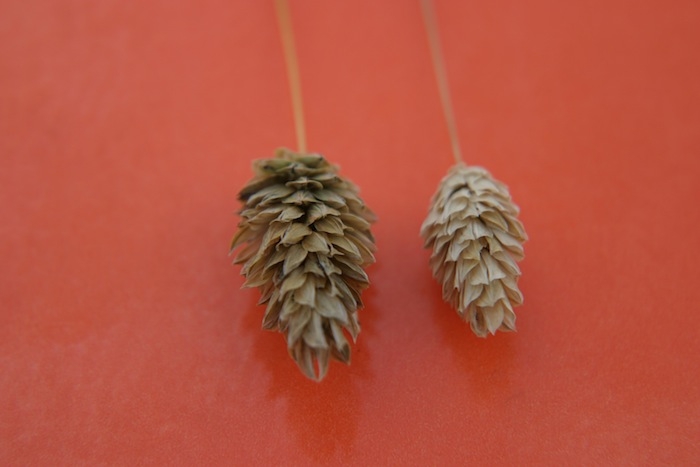 Canaryseed treated with chloride fertilizer on left. Chloride deficiency could be holding back yields