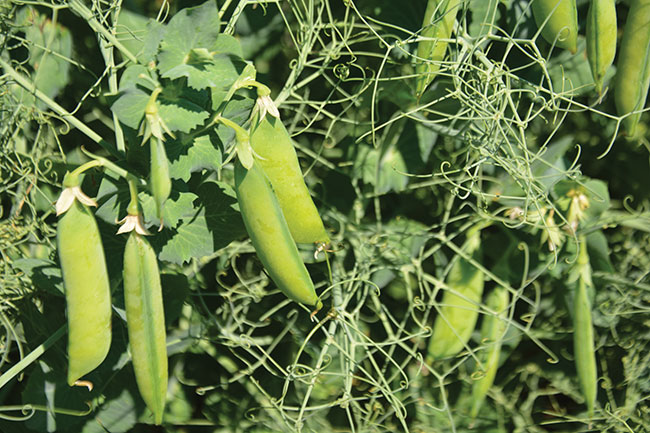 For years, agriculture has been targeted as one of the contributors to climate change. Louis-Pierre Comeau believes it can be part of the solution.

Comeau is an Agriculture and Agri-Food Canada (AAFC) research scientist who specializes in the study of soil carbon sequestration – the process by which carbon dioxide is removed from the atmosphere and stored in soil organic matter.

“Back when I was a student, I realized there was a great potential in the soil to mitigate greenhouse gas emissions,” says Comeau, who studied soil science at universities in Canada and Mexico before earning a PhD in soil science from the University of Aberdeen in Scotland.

“There is so much that’s still unknown in soil science. So many discoveries will be made in the future with the new technologies that are being developed, so it’s a very exciting field of study to be in.”

Comeau says one thing scientists do know is that if soil is managed correctly, carbon can remain there a very long time.

“We know that in soil, there can be organic carbon that’s been sitting there for thousands of years. But we don’t really understand why some carbon molecules can remain stable in the soil for so long or exactly what is happening,” he says.

Carbon is the main component of soil organic matter in farmer’s fields, so when soil is degraded through agricultural practices that cause soil organic matter to break down, this releases carbon dioxide back into the atmosphere. Comeau says in total, farming generates about eight per cent of Canada’s greenhouse gas emissions.

Comeau, who joined AAFC’s Fredericton Research and Development Centre in New Brunswick four years ago, is working with other AAFC scientists across Canada to assess beneficial practices that not only result in more productive soils and better yields but also reduce the carbon footprint of farming.

One possible solution is diversified crop rotations. Comeau is leading a national AAFC study looking at how using pulses and other legumes in rotations can lead to more nitrogen (legumes are known to be excellent nitrogen fixers) and carbon from crop residues being put back in the soil – something that not only improves soil health and fertility, but also helps mitigate climate change by contributing to soil carbon sequestration. 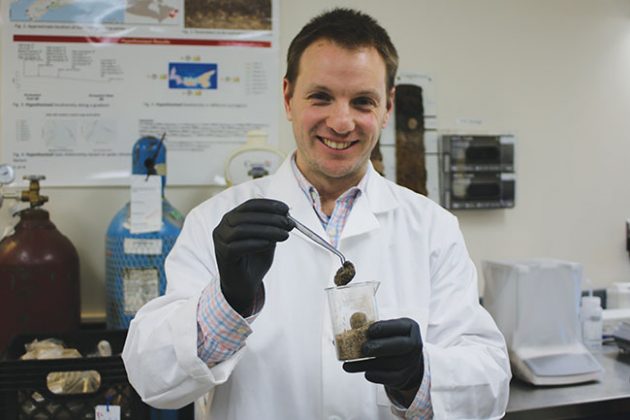 Louis-Pierre Comeau, AAFC soil scientist in Fredericton, is leading a study assessing the impact of legume crops on carbon levels in the soil. Photo courtesy of Agriculture and Agri-Food Canada.

Faba bean and pea are the two pulse crops being examined in the P.E.I. and New Brunswick trials. It is hoped that including these legumes in a rotation with potato (the main commercial crop in Atlantic Canada), along with wheat or barley (popular rotation crops in the region), will result in a boost of soil organic matter and also provide Maritime farmers with more options for growing cash crops.

Comeau says the trials, which started in 2018 and run to 2021, have already shown higher carbon levels, albeit only slightly, in the plots with the pulses in the rotation. He says that’s in line with similar crop rotation studies on the Prairies that indicate soybean, an oilseed legume, can lead to an increase in soil organic matter.

While the carbon increase has been small to date, Comeau expects it to rise over time, to the point where it could provide a benefit to farmers with respect to carbon taxation.

“We are just starting to process the results,” he says. “We need more data, and we hope that after five or 10 years, we will see a total carbon increase that will have a value for carbon pricing.

“If farmers can increase the amount of carbon in the soil thanks to those legumes, that carbon would have an ecosystem value but also an economic value.”

Comeau notes the first few years of the trials have been a learning experience for Maritime researchers, since faba beans and peas aren’t established crops in the region.

“We’ve run into a few challenges,” he says. “We’ve had a lot of bad weather here lately, and because these legumes are not adapted to this area, we’ve had issues with fungi attacks, disease and plant establishment.

“We are hoping that as we continue with the projects, we will be able to find the right agricultural practices for those legumes to be able to produce a good cash crop.”

Convinced of the long-term value of the legume trials, Comeau’s goal is to obtain sufficient funding to extend the project for many more years.

“I hope these legume rotation trials will continue for as long as I’m at AAFC, and that there will be people here who continue with these experiments long after I’ve left.”