Historically, phosphorus (P) has been seedrow-placed as much because of equipment limitations as because of historic agronomic recommendations. However, with the expansion of mid-row banding equipment, placing P in a mid-row band can now be easily achieved. But is P in a mid-row band effective? Rigas Karamanos of Koch Fertilizer Canada at Calgary, Alta., dug into long-term research trials established in 1979 at Breton and Ellerslie experimental farms of the University of Alberta (U of A) to answer that question.

“I wanted to find out if seedrow P placement was still the preferred application method, especially since most Prairie soils are high in total P after many years of fertilizer applications,” explains Karamanos. “We’ve also seen changes in seeding practices with the move to no-till, and that may also affect crop response to P.”

Karamanos worked with U of A scientists to sift through their long-term research plot results and published the findings in Communications in Soil Science and Plant Analysis; 44:219–231 in 2013 (Assessment of Phosphorus Status in a Long-Term Tillage and Phosphorus Placement Experiment). The objective of the study was to assess the impact of long-term in-row and mid-row placement of P on the yield and P-use efficiency by the crops in rotation over a period of 30 years. Dr. Jim Robertson, a retired professor from the U of A, who established the study in 1979, hypothesized that as soil residual P levels increased over the years with adequate P fertilization, mid-row band could be as effective as seedrow placement.

The Breton plots had a pH of 6.2 and organic carbon of 1.5 per cent, and the Ellerslie plots had a pH of 6.1 and an organic matter content of 4.8 per cent. The plots studied were established in 1979 and results were analyzed up to 2009. For the first 16 years, the plots were in continuous barley, and then in a canola, barley, wheat, wheat, canola, triticale, peas, barley, canola, triticale, peas, wheat, wheat (barley), barley, barley rotation running up to 2009. No-till/direct seeding began in 1979, and the conventional till treatment started in 1980.

In addition to yield response, nutrient use efficiency was assessed using two methods. The apparent crop recover efficiency of applied P (PRE) was determined by subtracting the P uptake in above-ground crop biomass in the control from the P uptake in the above-ground crop biomass when P fertilizer was applied, and then dividing by the amount of P fertilizer applied. The fertilizer P-use efficiency (PUE) method was calculated as the total P in the crop divided by the P applied, expressed as a percentage. Soil samples were taken from 1979 to 1996, and again in 2007 to 2009 using the Olsen method and PRS probes.

“For most of the crops, in-row P was still the best option, except for barley under conventional seeding, which produced similar yields with both P placement treatments,” says Karamanos.

Maintaining soil P levels
Total P uptake over the 20 years of barley was also greater for the in-row compared to the mid-row placement. Similar trends were observed for the other crops. Soil test analysis found that there was very little change in the average soil “available” P levels over the 30 years, reflecting the balanced approach of matching crop removal of P with fertilizer P levels. Karamanos says that when P recovery was based on balancing inputs and outputs of P, “recoveries after 31 years were on the order of 55 per cent to 73 per cent and were greater under in-row than mid-row placement of P only under direct seeding.”

While this study compared in-row and mid-row banded P, and generally supports in-row P, Karamanos says that producers don’t necessarily need to be restricted to just in-row P. In other research (reported in the June 2012 issue of Top Crop Manager), he presented the case that sidebanding P (placing P fertilizer close to the seed but not in the seedrow) can be just as effective as in-row P in some cases. The effectiveness of sidebanding is potentially explained by the relative proximity of sideband P to the seed, whereas mid-row P is likely too far away from the seed to provide a crop response.

Crop sensitivity to seedrow P also guides the decision for P placement, where oilseeds and pulses are sensitive to high rates of P, and could benefit from a sideband placement. Another possibility could be splitting P rates between in-row and a sideband.

“When looking at P, we are seeing that there may be more opportunities than just in-row placement. A grower has to balance out things like equipment capabilities, sensitivity of crops to P fertilizer, seeding system and soil-P fertility,” says Karamanos. 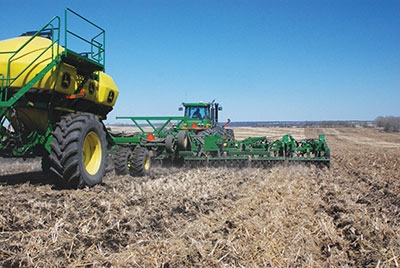 Long-term U of A plot research generally supports placing phosphate fertilizer with the seed. Historically