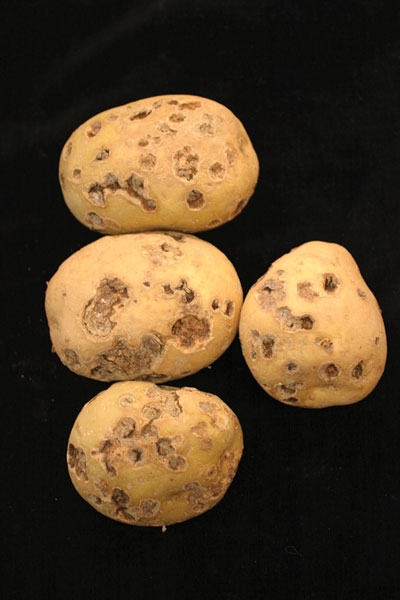 Among all the diseases that can reduce quality and result in economic losses for potato growers, common scab is one of the most difficult to control. Scab’s telltale brown lesions are caused by infection of a soil-inhabiting bacterium named Streptomyces scabies, and once in a grower’s fields, there is not much that can be done. No chemical control methods are available in Canada and fumigation is toxic and expensive.

Many avenues of control have been explored, and the study of one of the most promising is being spearheaded by Dr. Claudia Goyer, a molecular bacteriologist at Agriculture and Agri-Food Canada’s (AAFC’s) Potato Research Centre in Fredericton, New Brunswick. Assisting Goyer are molecular biology technicians Sean Whitney and Jan Zeng.

Goyer’s work involves harnessing the ability of soil bacteria to produce molecules that inhibit the growth of other pathogenic bacteria such as S. scabies. The eventual goal is to produce a biopesticide, a biologically  based product that controls disease while reducing risk for the environment and human health in comparison with conventional pesticides. Biopesticides are generally more targeted, effective in small quantities and have a higher rate of decomposition.

To Goyer, looking to the soil for a common scab control method is a no-brainer. “It’s well-known that soil is a warfare zone where bacteria use a variety of strategies to compete with each other,” she says.

Goyer and her colleagues have found the majority of soil bacteria able to inhibit the growth of S. scabies are of the genus Bacillus. “This is good news, because with them, it’s fairly easy to make an effective biopesticide,” she says. “They’re easy to grow and they produce spores that resist adverse conditions like heat, cold and dehydration.”

This means biopesticides from Bacillus bacteria can be stored and transported without much difficulty. In addition, the hardy nature of spores means the bacteria has an improved chance of establishing good population numbers in a field after it has been applied.

Bacteria in the Bacillus genus are not the only ones that have been studied to produce commercial biopesticides. Pseudomonas, Agrobacterium, and Streptomyces species have also been used. “The most renowned biopesticide features Bacillus thuringiensis, a bacterium that produces a protein toxic to insects,”
says Goyer.

Step by step
The team begins the process by isolating bacteria from field soil. To do this, they add a solution and shake vigorously. The soil bacteria are then put into competition with a large quantity of common scab pathogen on solid growth medium plates, explains Goyer. “In these conditions, only bacterium that can produce molecules that can stop the growth of common scab will survive and multiply. They’ll form a colony you can see easily on the plate.”

That is the fairly quick part; purifying, characterizing and identifying inhibiting bacteria takes much longer, but they are crucial steps in ensuring the bacteria isolated present low risks to human health. After this is finished, the researchers then test different formulations of bacteria to see if this increases the control of common scab, and conduct further studies in the greenhouse and field.

So far, greenhouse tests with Bacillus isolates (grown in liquid culture and applied as a seed treatment on potato tubers at planting time) have provided outstanding results. “We’ve seen a 60 percent reduction in the severity of scab,” says Goyer. “This indicates that the Bacillus isolates were decreasing the severity of common scab probably by reducing the number of common scab bacteria in the soil.”

In the field trials to come in 2011 and 2012, however, Goyer expects a reduction of only 30 to 40 percent in the severity of common scab because the conditions will be harsher compared to those in a greenhouse.

Although Goyer has chosen to test seedcoating, there are other ways biopesticides can be delivered, including wettable powders, dusts and liquids. They have differing shelf lives, and offer differing success in terms of the bacteria multiplying and surviving in the environment, thus controlling the target disease. They also differ in terms of ease of preparation, ease of application and overall expense. The choice to go with one or another also depends on what part of the plant will be treated, where and when the pathogen grows and infects, and the grower’s particular cropping system. “After careful consideration, we decided the best time to introduce Bacillus-based biopesticides against common scab would be at planting as a tuber seedcoating,” says Goyer.

Introducing Bacillus at planting also allows the bacteria to colonize the tuber, the developing roots and the stolons, outcompeting S. scabies and preventing its growth. In addition, if it is possible to mix it with other products also applied as a seedcoating, this would allow growers to introduce the bacteria in a convenient and cost-effective way.

The greatest challenge in this research is the fact that it is all about delivering a biologically based product, says Goyer. “It’s fundamentally different than chemical products because its living nature is what must be preserved and nurtured as it’s integrated as a regular strategy to control disease.”