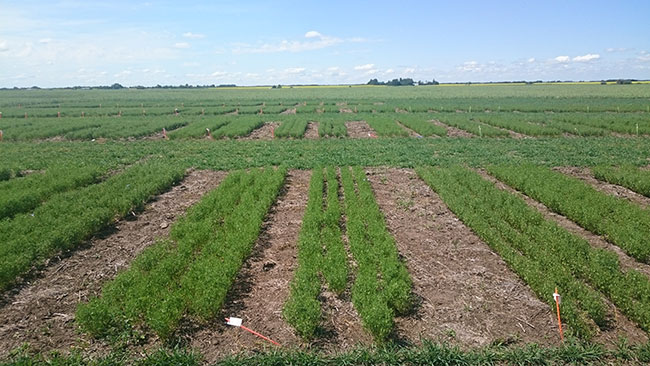 When the price of red lentils rose to 40 cents per pound, Alberta growers rushed into planting around 500,000 acres of lentils in 2016 and 2017. While prices declined in 2018 because of the Indian tariffs, grower interest in lentil remained high – about 420,000 acres were still grown in 2018.

Jenn Walker, research manager with Alberta Pulse Growers says lentil performance was variable across the province in 2018, similar to other pulse crops. Yields in general were below average, but varied from area to area depending on the spotty rainfall that fell across Alberta.

“We are seeing growers in non-traditional areas like the Peace and in the Black soils experimenting with lentils. In the Black soils, we’re seeing more success along the eastern side of Alberta than the central area,” Walker says.

Robyne Bowness, a pulse specialist with Alberta Agriculture and Forestry has been researching Clearfield red lentil production practices in Alberta. Based on four years of research, she has developed a recipe for success for growing Alberta lentils.

“Overall, we have had good success and surprising results from some areas. I was very surprised to see good performance at Falher in the Peace region, likely because of the longer daylight hours,” Bowness says.

Field selection
Pick fields with lighter, sandy loam to loam soils that are well drained. Low-lying fields are not a good choice as lentils don’t like to have their feet wet and cannot tolerate excess moisture. They don’t tolerate salinity, either. Red lentils are quite drought tolerant and can withstand higher temperatures during the growing season than other crops.

Seeding
Red lentils can tolerate up to 4 C of frost, so they can be seeded early. Seed at a depth of around two inches into cool, moist soils and inoculate with a strain of Rhizobia developed for lentil. Optimum seeding rate was 12 seeds per square foot (110 to 120 seeds per square metre). Check thousand kernel weight (TKW) as seed size varies in red lentil, and use a seed calculator to determine the correct seeding rate.

Land rolling
Avoiding stony fields is advised. Land rolling was found to be even more important with lentils than peas, because of the short height of lentils. Pre-emergence timing is best. Avoid wet conditions that may result in soil compaction (that reduces emergence). Clay soils may be prone to crusting when rolled. Rolling is safe post-emergent up to the sixth node, but time must be left between post-emergent rolling and herbicide application so that lentil recovers from rolling stress prior to herbicide application.

Potassium and sulphur fertility is usually not a problem in
Alberta lentil production, except possibly on sandy soils. Micronutrients are of minor concern and deficiencies are not widely documented.

Bowness had heard anecdotal reports that starter nitrogen (N) might be beneficial. Her research found that as starter N increased, nodulation decreased. However, she found a small benefit in applying 15 pounds N per acre.

“We didn’t see a positive yield effect every time, but overall, there was a benefit with 15 pounds starter N, but don’t go above 30 pounds as yields are reduced,” Bowness says.

Weed control
Lentils are poor competitors with weeds but the Clearfield trait helps with weed control. Group 2 herbicides Odyssey, Solo and Ares are registered on Clearfield lentils. Sencor, a Group 5 herbicide, is also registered for post-emergence suppression of broadleaf weeds.

These Group 2 herbicides can be a bit hard on lentil, but
Bowness’ research didn’t find any difference in plant growth or days to flower or maturity. Nodulation and yield were sometimes affected compared to control plots, but the impacts varied by year and location and were not consistent.

“It is more important to control the weeds than to worry about the inconsistent impacts on nodulation and yield,” Bowness says.

Aphanomyces is highly aggressive on both pea and lentil. Aphanomyces infection can occur any time during the growing season, but usually infects early. No seed treatments are registered for control, and in-crop fungicides have no effect on the pathogen. Recent surveys have found Aphanomyces throughout Alberta.

Foliar disease
Sclerotinia white mould is the biggest foliar disease concern. It can cause large economic losses in wet years. In the Black soil zone at St. Albert, research trials consistently saw white mould in the plots. Growers in wetter areas with higher organic matter can expect to see the disease. Foliar fungicides are available and work well when applied before canopy closure.

Ascochyta has the potential to be very destructive on lentil. However, Bowness says there is good resistance in the germplasm with most varieties rated as Moderately Resistant.

Growers should scout for the diseases and spray with a fungicide if conditions warrant.

Harvest
Lentils mature at around 95 days. Desiccation with Reglone (diquat) can help to dry down the crop. The Reglone label recommends application at a similar stage as when swathing would occur, when the lower-most pods are yellow-brown and seeds rattle. Check with your lentil buyers and processors to ensure there aren’t any export restrictions with diquat desiccation.

Where acreage goes in 2019 will depend on the relative price of lentils compared to other pulses. But should growers decide to grow red lentils again, the foundation of a good crop has been well researched for Alberta farmers.