Manage crop rotations with an eye on rooting patterns and water use efficiency. 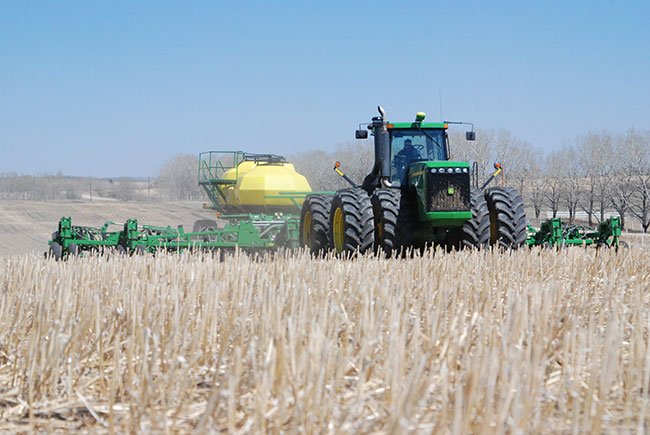 In a “normal” year, farmers can use crop rotations as a tool to access soil moisture to get the most out of stored and growing season precipitation. In a dry year like 2021, it is even more critical to take advantage of any stored soil moisture going into the 2022 growing season.

“I think, to a certain degree, that growers are aware of the water use requirements of different crops and plan their crop rotations accordingly,” says Dale Risula, provincial specialist, specialty crops, with the Saskatchewan Ministry of Agriculture in Regina. “But it also depends on other factors, like soil moisture, commodity prices and the weather.”

Generally, crop production on the Prairies relies heavily on available soil moisture in the rooting zone. While growing season precipitation can impact crop yield more than spring soil moisture conditions, stored soil moisture is important for germination and early season growth. It’s like carrying a cash balance in the bank that can be drawn upon when needed.

Spring soil moisture can be improved, depending on the type of crop grown. Leaving stubble standing as high as possible can help catch snowfall and reduce surface runoff and evaporation in spring. Risula says that stubble that is six- to nine-inches tall can conserve 0.5 to one inch more water over winter, compared to a field that was cultivated in the fall. The type of crop will impact the amount of snow trapping, with crops like peas, chickpeas and lentils leaving very little stubble to trap snow.

An additional inch of soil water can significantly contribute to higher crop yields. For example, in the Dark Brown soil zone, an extra one inch of moisture could yield an extra four bushels per acre (bu/ac) of CWRS (Canada Western Red Spring) wheat, 6.2 bu/ac of barley, 2.80 bu/ac of canola and 7.75 bu/ac of oat.

Crop yield and the overall average water use efficiency increased linearly as stubble height increased to 18 inches. For example, wheat yield increased from 29 bu/ac (1,910 kilograms per hectare, or kg/ha) to 31 bu/ac (2,075 kg/ha) from cultivated to extra-tall stubble. Because all stubble types were overwintered as tall stubble, this increase in yield was attributed to a better microclimate during the growing season with reduced evapotranspiration and increased solar reflectance rather than increased snow trapping. These benefits would be generally achieved following crops where stubble can be left tall, such as cereals and canola. 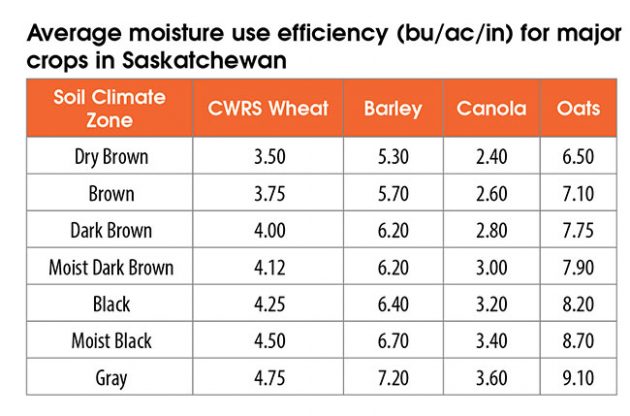 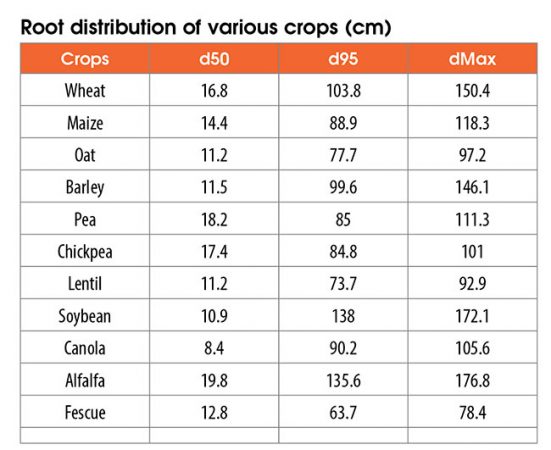 Generally, alfalfa, safflower and sunflower have the deepest roots. Barley, canola, oriental mustard and wheat have a moderate rooting depth, and field pea, flax and lentil are shallow-rooting.

A study conducted at AAFC Swift Current looked at rooting characteristics and soil water use of chickpea, pea, lentil, canola, mustard and wheat. This research, led by Herb Cutforth, found that wheat withdrew the most water from the soil profile, and pulses withdrew the least amount of water. Pulses were also found to be shallow-rooting, removing significantly less water than oilseeds and wheat below the 31-inch (80-cm) depth. Oilseeds withdrew less water than wheat from the upper regions of the soil profile.

Another study conducted at AAFC Swift Current, led by Brian McConkey, looked at root distribution by depth through an analysis of a research database that included root measurements. Crops included were wheat, maize, oat, barley, pea, chickpea, lentil, soybean, canola, alfalfa and fescue. McConkey found that at least half of the root biomass could be found in the upper 7.9 inches (20 cm) of soil for all crops.

Generally, the research found that cereal and pulse crop roots were distributed more evenly in the soil profile, while more roots were accumulated in the upper soil layers for oilseed crops.

A demonstration conducted in 2010 by researchers at AAFC Scott in Saskatchewan shed further light on rooting depth. They seeded four plots to canola, wheat, lentils and green foxtail. To scan the roots, a 60-inch (150-cm) soil core that was three inches in diameter was pulled. Researchers then used a scanner to capture images of rooting depth. By July 13, 2010, lentils showed dense root growth to 70 cm, and limited root growth to 90 cm. The canola and wheat roots reached past 100 cm. Green foxtail roots were dense to 55 cm below the surface. These depths were reached even though the research station had received 14 inches (363 mm) of rain at the time of scanning.

These research studies can help guide farmers and agronomists when developing crop rotation plans. While commodity prices will always have a large impact on crop rotation decisions, understanding crop rooting patterns and water use efficiencies can help utilize soil moisture in the most efficient way. And depending on what precipitation occurs between harvest and spring seeding, that knowledge could be more valuable than ever in 2022.