Towards RNAi as a new tool for managing Prairie wireworms. 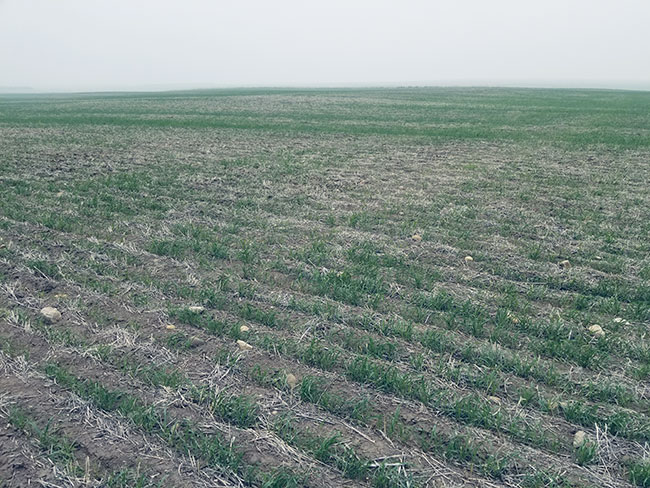 One way to defeat difficult enemies is to use their own strengths against them. In keeping with this maxim, two Agriculture and Agri-Food Canada (AAFC) scientists are working on a way to use a wireworm’s own cellular defences against its own genes.

The two Lethbridge-based researchers are combining their expertise in molecular biology and entomology to investigate RNA interference (RNAi) for managing wireworms in Prairie wheat crops.

A bit about wireworms
Wireworms are the tough-to-control larvae of click beetles. “The larvae live in the soil for multiple years — three years, five years, seven years – it depends on the wireworm species and the conditions,” says Haley Catton, the entomologist collaborating on the project. 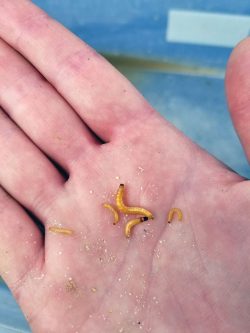 “Wireworms move up and down in the soil profile chewing on roots and seeds. They are quite a challenge to manage because they are not accessible; they can go down a metre deep or more if it is too cold, too hot or too dry.”

These pests attack many different crop types. In terms of field crops, “they eat mostly cereals and other grasses, but they can also affect pulses,” she says. “They might nibble on canola a bit but not enough to damage the plant.”

Catton adds, “When you have wireworms in a field, they are usually a chronic problem because they have such a long life cycle.”

She notes that, in the past, lindane provided long-lasting wireworm control, but it was banned from the Canadian market in 2004.

“A few years later, neonicotinoid seed treatments came on the market. They protected the crop by putting the wireworms to sleep for a while, but these products didn’t kill the wireworm populations.

Since 2020, some new chemicals have come on the market for wireworm control, giving crop growers more options.

However, Catton emphasizes the importance of using integrated pest management with multiple tools, including non-chemical options, because insects can adapt and become resistant to frequently-used control measures.

A bit about RNAi
“RNAi is an important pathway for cellular defence in plants and animals,” explains John Laurie, the molecular biologist leading the project.

He outlines the basic concepts involved in RNAi. “DNA has the instructions for making a protein. It encodes RNA, which uses the instructions to make the protein. The RNA making proteins in plants and animals is pretty much all single-stranded.

“However, some things that invade cells, such as viruses, often have a double-stranded RNA intermediate stage in their replication process.

“RNAi is like a scan tool for an organism’s genome looking for things that are misbehaving.” So, the RNAi hunts for and detects double-stranded RNA (dsRNA) in a cell and controls it. Plus it hunts around in the cell for RNA sequences that match the dsRNA and eliminates them as well.

Scientists can trick an organism’s own RNAi into ‘silencing’ or turning off a specific gene in the organism. For instance, to control an insect pest feeding on a crop, they might target a gene involved in digestion so the pest will starve to death.

The degraded RNA can’t make the target gene’s protein. As a result, the gene’s cellular activities cannot be carried out, and so the gene is silenced.

RNAi advantages
According to Laurie, RNAi has the potential to be a targeted, effective, sustainable addition to the wireworm management toolbox.

Also, Laurie notes that it would be very hard for organisms to evolve resistance to RNAi because this pathway is so important in cellular defence and reproduction.

A challenging pest
RNAi methods have been developed to manage several other insect pests, but wireworms offer some unusual challenges. 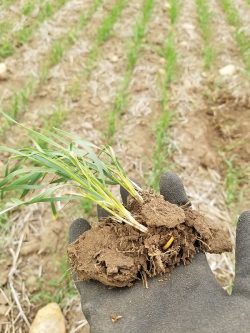 One challenge is that several wireworm species attack Prairie crops. “In this project, we are targeting the three most abundant pest species of wireworms according to a recent 15-year survey of the Prairies,” explains Catton. The three species are: Selatosomus aeripennis destructor (prairie grain wireworm), Hypnoidus bicolor (no common name); and Limonius californicus (sugarbeet wireworm).

Another practical hurdle is that you can’t rear wireworms in the lab, so Catton’s research group has to hand-collect wireworms from different fields each year. That can be difficult, especially if the larvae happen to be several feet below the soil surface. For this project, the researchers need lots of wireworm samples of all three species for use in things like bioassays to determine the effects of the dsRNA on the wireworms.

A more fundamental challenge is that the genomes of two of the three wireworm species have not yet been sequenced. So, Laurie’s research group has to work around that to figure out which wireworm genes to target.

“We are basically starting from scratch. Haley gave us specimens, both beetles and larvae, of the three species. My lab extracted all the RNA from the beetles and larvae. We sent that to a facility that sequenced the RNA,” he says.

“Now, we have a huge list of all the expressed genes in all those specimens. It’s like printing off all the words listed in a dictionary, but without the definitions of those words.”

Fortunately, other insects and model organisms have been sequenced and used in RNAi studies, and those species have gene dictionaries that include the definitions. So Laurie’s group is learning more about the genes in their list by comparing them to known genes in these other organisms.

“We’re at the stage where we have started searching our list to identify genes that have been shown in other studies to work for RNAi control in some other chewing or sucking insects,” Laurie explains.

“Our plan is to synthesize the dsRNA for those genes first and test those.”

For each candidate gene, they will start by delivering the dsRNA to the wireworms directly, for example, by soaking the insects or injecting them, and then seeing what effect the dsRNA has on the wireworms.

Towards a seed treatment
Next, they’ll try putting the most promising dsRNA into the wireworms’ food to see if the wireworms take up the dsRNA and how it affects them. 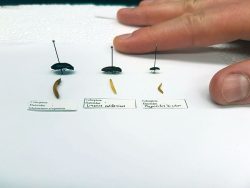 Feeding the dsRNA to wireworms could be yet another challenge. Catton explains that, although wireworms are a chewing pest, they don’t just take a bite of a plant and swallow.

“Wireworms chew to wound the plant, and then they excrete an enzyme out of their mouths that will digest that plant material outside of their mouths. Then they slurp up the juice. We call them extraoral digesters,” she says.

“They also have a very fine filter of hairs at their mouth that will prevent a lot of things from getting in, including bacteria.”

Although dsRNA molecules are very small, the researchers may need to tweak things to actually get the dsRNA past the filter. However, Laurie already has some ideas for things to try.

The project’s final stage will be to try applying the dsRNA as a seed treatment in a controlled environment. “Since wireworms live in the soil, we’re hoping our work will lead to some technology where the seed and maybe young seedlings are protected,” he says.

“If we have good success in our feeding studies, then I think we’ll be on a good path to potentially be able to hand off the research to commercial interests.”

Catton notes, “There would need to be a lot of work testing non-target organisms that, based on the genetic libraries, should not be affected by the dsRNA, but they have to be tested to confirm that. We’re going to do a little bit of that in this
project, but more would be needed [if the seed treatment goes to commercialization].”

With all the intriguing challenges in this research and the important long-term goal of wireworm management, Laurie and Catton are excited to be working on this project.

“I’m sure there are lots of challenges that we haven’t thought of yet. It seems to be the way it works with wireworms. The more I learn about them, the more fascinating and challenging they become,” Catton adds.

To find out more about Prairie wireworms and the current management options, you can go to AAFC’s new Guide to Pest Wireworms in Canadian Prairie Field Crop Production, developed by Catton and some of her colleagues. The guide is available online for free as a pdf in English or French. Or you can contact Catton (Haley.Catton@AGR.GC.CA), who still has a few free hard copies available.