Targeted control of smuts and bunts to open the way for multiple benefits. 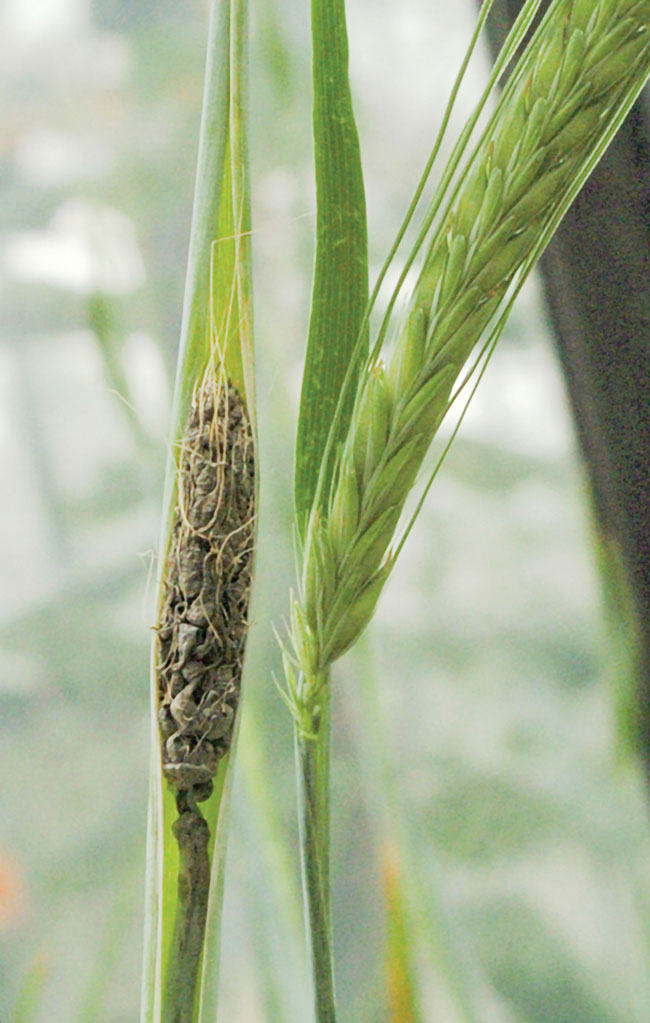 A smutted head of barley is shown here alongside a healthy head in a greenhouse at AAFC. Photo courtesy of John Laurie.

Next-generation seed treatment technology that acts at a nano scale – the scale of genetic material in cells – is in the making at Agriculture and Agri-Food Canada (AAFC) in Lethbridge, Alta.

This research, led by research scientist John Laurie, is currently developing the technology to target smuts and bunts in cereals.

That targeted control could reduce the need for broad-spectrum fungicidal seed treatments in Prairie cereal crops. And a move away from these fungicides could improve soil health and pave the way for using beneficial fungal inoculants.

Plus, Laurie’s project team is working on using the technology to enhance seedling performance, such as increasing seedling tolerance to stress.

All in all, this technology has the potential to be a powerful tool for boosting crop yields.

A look at the mechanism
In this project, Laurie’s team is using “cell-penetrating peptide nanocarriers.” As you can probably guess, nanocarriers are nano-sized transport agents. And these nanocarriers can penetrate cell walls and membranes to deliver their cargo inside cells.

Their cargo is double-stranded RNA (dsRNA), which activates a natural cellular defence mechanism called RNA interference (RNAi). Laurie explains that RNAi is common to many types of cells, such as cells in animals, plants and fungi. An organism’s RNAi tries to prevent viruses and virus-like sequences, which often have a dsRNA form in their life cycle, from getting out of control and harming the organism.

Therefore, the occurrence of dsRNA in a cell is like a warning bell for the cell’s defence system.

“This defence system has two key players: a Dicer and an Argonaute,” Laurie notes. “The Dicer scans within a cell looking for double-stranded RNA. If it finds any, it chops it up into small pieces that are about 21 to 24 nucleotides long [nucleotides are the building blocks of RNA and DNA]. Those small pieces are like words that are used to recognize anything matching or similar. Those pieces are picked up by an Argonaute, which then combs through all the RNA in the cell and degrades any matching sequences.”

Researchers can use an organism’s own RNAi to suppress or silence” a target gene in the organism. To do that, they design dsRNA with a sequence of nucleotides that is the same as a sequence in the RNA made by the target gene’s DNA. The RNAi will degrade that RNA so the RNA can’t convert the gene’s DNA code into protein to carry out the gene’s cellular activities. In that way, the gene is deactivated.

How specific is RNAi?
“The good thing with RNAi is that it is very specific. Just to give you an idea of how specific it is, plants make a ton of RNA that gets chopped up into small RNA, which means that we eat a ton of small RNAs and double-stranded RNAs every day when we are eating plants. So this stuff that is meant to knock out certain sequences in the plants doesn’t cause us any harm,” Laurie says.

“If you think of a word that is 20, 21, 24 letters long, you can go through a big dictionary and find that word very easily even though the dictionary is full of words. In the sense that a word with that many letters is very specific, we can target a gene in the fungus and it will not affect us, it will not affect the plant, it will not affect other fungi. And since we have sequenced so many organisms, we have a good idea of what’s out in the field.”

They can make the dsRNA as specific as they need it to be. “For instance, we could target just the smuts and bunts by targeting [genes that are the same or very similar] among the smut and bunt fungi. Or we could probably target only the smuts and not the bunts,” he says. “Or we can multiplex the seed treatment – we could put in some double-stranded RNA for this specific smut that’s in the area and also some doubled-stranded RNA for this bunt that’s in the area and target them at the same time.”

Laurie explains that dsRNA can be delivered to a plant pathogen in different ways.

“One way is to provide the double-stranded RNA to the pathogen itself.” Many research groups are using this approach. For instance, they spray the dsRNA on plants or apply it to seeds. There the pathogen takes up the dsRNA, which induces the pathogen’s RNAi to silence the target gene, limiting pathogen’s ability to cause disease. So far, Laurie’s group has been focusing on this approach.

“The other way is called host-induced gene silencing where the double-stranded RNA is picked up by the plant, and then the plant processes it and passes it on to the pathogen to shut down the fungus. That seems to be working fairly well for some fungal pathogens because fungi have a very intimate relationship with the plant cell.” Laurie’s group has recently started working on this approach as well.

He adds, “Another good thing is that making RNA is getting cheaper and cheaper. Maybe 10 or 15 years ago, making RNA was too expensive to consider applying it to a field or something like that. But some companies can now make it much more cheaply. And I think the development of the COVID vaccines [that use messenger RNA] has helped to rapidly advance the technology for making RNA.” 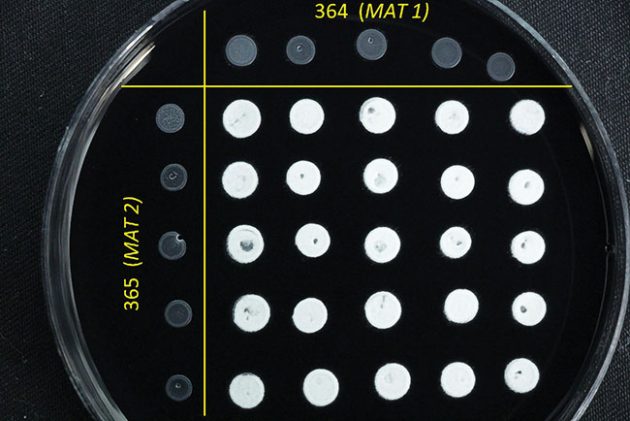 Smuts can be grown in the lab where successful mating and growth of the white, fuzzy infectious stage can be studied with ease.

Why target smuts and bunts?
If left uncontrolled, smuts and bunts can cause serious yield and quality losses in Prairie cereal crops. “Because of the widespread use of fungicidal seed treatments, smuts and bunts aren’t as much of a problem as they were in the early 1900s when people would see clouds of spores when they were harvesting fields,” Laurie says.

“However, I think there is definitely a move away from these fungicides. They are often quite broad spectrum and pretty toxic.”

He notes that a shift away from these fungicides would not only be good for the environment, but would also open the door for applying beneficial fungi to crops.

“We definitely wouldn’t be able to use any beneficial fungi with the fungicides we use at present. So, if we know that we’re applying a fungicide mainly to suppress the smuts and bunts, then we could use this RNAi technology to get around that.”

Progress so far
Laurie’s project team includes André Laroche and Reem Aboukhaddour, who are both research scientists at AAFC-Lethbridge, and Josh Lawal, a Masters student through the University of Alberta. Although COVID restrictions on the number of people in the lab have slowed the research, the team is making progress.

For the project’s first phase, the team is working with Ustilago hordei, covered smut of barley, as the model to develop this approach. Laurie worked with this pathogen in his PhD research, including being part of the international group that published Ustilago hordei’s genome sequence. Plus, he can draw on decades of smut research by other scientists.

“With this disease, the barley heads are smutted with black spores. When the field is harvested, those spores break free, float in the air and get attached to healthy seeds. In the spring when that seed is planted, the spore will germinate and undergo meiosis [cell division that produces sex cells],” he explains. Then, the fungus goes through a number of steps to reach its infective stage.

“There is just a very short window when the barley seed is germinating that it can actually get infected with barley smut. The thinking is that the fungus needs to get in near the meristem [the plant’s growing point] and reside in there to cause infection. And that can only happen very early in germination; otherwise, the meristem takes off and the fungus can’t get into it. In fact, you can’t even tell that a plant is infected with smut until about flowering time when you see the growth of the fungus in the floral tissue and sometimes in the flag leaf as well. So, all we need to do is stop the fungus in that short window.”

Laurie’s team began by focusing on the fungus’s final steps just before its infective stage, determining the right genes to target and the right region of each gene to target. They had some good success with suppressing these steps in the lab, but they were struggling to suppress the pathogen enough to completely prevent the formation of its infective stage.

Their initial work also included screening different cell-
penetrating peptides to see which ones are best at binding to the dsRNA and delivering it into a Ustilago hordei cell.

More recently, the team has started to focus on an earlier stage of the pathogen’s development, targeting the genes that play a part in the germination of the black spores that land on the seeds, and the next steps right after that.

“Moving back to this earlier stage allows us to [firstly] take advantage of maybe a stronger RNAi response; for most organisms, the RNAi system is most active in and around meiosis and reproduction,” Laurie explains.

“And [secondly] it allows us to better mimic what would more likely be used as a technology in the field. The early parts of the project were done more in the lab on plate assays, but now we’re doing infection studies on the seeds, growing the plants, and measuring disease suppression in a greenhouse setting.”

As well, they have started investigating dsRNA seed treatments that target certain plant genes in order to enhance seedling behaviour in some way. For example, Laurie thinks it might be possible to provide a seed treatment that will increase the seedling’s ability to tolerate stress, like drought stress or cold stress.

Laurie expects to be wrapping up this project in 2023. “By that point, we hope to have at least the sequences and the technology where we could suppress the smuts and maybe also the bunts. And then hopefully a company will be interested in commercializing it.”

He adds, “We’re learning more and more about the microbial world and how important it is for us and for our crops. Technologies like RNAi will play a large role in the future in allowing us to improve the microbiome.”

The project is funded by Alberta Innovates, the Alberta Wheat Commission and the Sask Wheat Development Commission.