Sept. 30, 2013, Varennes, QC - Natural Resources Minister Joe Oliver has confirmed SDTC’s financial contribution in VANERCO, the joint venture partnership formed by Enerkem (www.enerkem.com) and GreenField (www.gfsa.com) to build and operate a cellulosic ethanol facility integrated with GreenField’s existing ethanol plant in Varennes, Quebec.  Through SDTC’s NextGen Biofuels Fund, $734,500 will support the initial development of the facility as a repayable contribution, an amount that could go up to $39.8 million.

“By supporting innovative projects like VANERCO’s, we are helping Canadian companies develop an idea into a marketable reality," said the Honourable Joe Oliver, Canada’s Minister of Natural Resources.

“This project truly puts industrial waste to work, creating jobs in the community while producing as much as 38 million litres of ethanol a year. SDTC is proud to be a partner in this pioneering project,” said Vicky Sharpe, SDTC President and CEO. “Getting technologies such as this to a commercial scale will be crucial in helping Canada play a key role in the dynamic global cleantech marketplace, currently valued at $1 trillion.”

The VANERCO cellulosic ethanol plant will contribute to the ongoing development of the next generation biofuels industry in Canada. In turn, the growing sector of advanced biofuels stimulates the manufacturing sector, creates jobs, generates value from waste materials and reduces oil dependence, imports and greenhouse gas emissions while positioning Canada at the forefront of the global clean technology sector.

The non-recyclable waste to be used at the VANERCO facility will come from institutional, commercial and industrial sectors, and from construction and demolition debris.  Construction of the facility, which will use Enerkem’s proprietary waste-to-biofuels technology, is planned to begin in 2014.

The plant could access up to $39.8M as it passes through project milestones and required governance approvals. 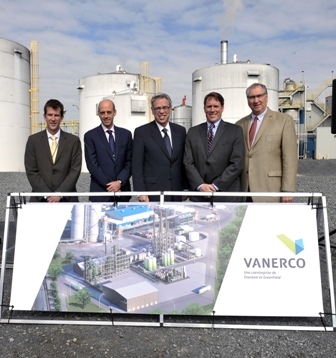 From left to right : Pat Breton (SDTC) SDTC has contributed to the creation and operation of a cellulosic ethanol facility in Quebec.