Cleavers is an annual or winter annual weed that reproduces through seed. While the weed is native to temperate regions around the world and affects most field crops, it has become more of a problem in Canada’s Prairie regions over the last few years.

According to Chris Neeser, a weed specialist with the pest surveillance branch of Alberta Agriculture and Rural Development, cleavers is becoming increasingly troublesome in cereals and canola largely because of the trend toward zero-till. Traditionally rooted out with cultivators, the trailing weed is now enabled to develop populations that germinate in the fall and overwinter in a vegetative state, resuming growth early in the spring.

“What we have as a result is, increasingly, cleavers that have a competitive advantage over crops that germinate in the spring. Those cleavers that are more advanced are more likely to survive herbicide applications,” says Neeser.

Cleavers can cause problems at almost every stage of crop development. Early on, winter annual cleavers are competitive with field crop seedlings; later, cleavers causes significant crop losses. Cleavers can get tangled up in harvesters. Also, cleavers seed is similar in size and shape to canola seed, and once canola seed has been contaminated with cleavers seed it’s virtually impossible to separate.

In 2010, Canada’s annual weed survey, which is done in sequence province by province, took place in Alberta. Among the top 20 weed species affecting dryland crops, ranked according to frequency, uniformity and density, cleavers placed third, after wild buckwheat and wild oats.

Although these are the newest statistics for Alberta, Neeser says growers have been reporting increased numbers of cleavers since 2010, likely because of humid weather conditions. “If we have a moist spring and then sufficient rainfall through the summer and fall, there’s a good chance that cleavers will be doing well,” says Neeser.

According to Nasir Shaikh, a provincial weed specialist with Manitoba Agriculture, Food and Rural Development (MAFRD), the cleavers situation is worsening eastwards from southern Saskatchewan. “The situation is bad on the western side of the province right now. We don’t have much incidence of cleavers in the Red River Valley or on the eastern side. But it is moving eastwards, so it’s a matter of time,” he says.

Management strategies
According to Shaikh, a key management approach is to tackle cleavers early in the season, when growers are buying seed. Growers planting canola should be especially vigilant.

“The biggest concern I have regarding cleavers is that it can contaminate canola seed, and this can reduce the quality of the produce, the seed and the grain,” he says. “It’s very difficult to separate canola seed from cleavers. The best way to prevent this is to use the best quality seed, certified or pedigreed seed, with almost zero per cent cleavers.”

Growers should plant where possible in well-drained fields, as cleavers prefers damp, moist conditions. Prior to planting, a pre-seed burndown will take care of the overwintering cleavers, says Shaikh.

Neeser’s message concerns herbicide resistance. With Group 2 resistance noted in all three Prairie provinces, growers’ chief concern should be avoiding the emergence of resistant cleavers populations. “We have quite a bit of ALS (Group 2) resistance in Alberta. In 2007, 17 per cent of the sample of cleavers that was surveyed was resistant to Group 2 class herbicides,” he says.

He strongly emphasizes the importance of rotating herbicides between crops, and avoiding use of the same group from one crop to the next. It’s crucial that growers pay attention to the active ingredients in their herbicides.

Secondly, but no less importantly, Neeser recommends using herbicide mixes that include more than one herbicide group, and preferably multiple groups.

Neeser says growers should ensure that Group 2 resistant canola, such as Roundup Ready canola, is not planted year after year. “Given that so much Roundup is used already, you have to use it carefully. Don’t always just use Roundup Ready canola. If you do use it, make sure that in your subsequent crops, Roundup Ready canola isn’t the mainstay of your weed control. That’s important,” he says.

In general, crop rotation is a strong option for growers facing cleavers problems. For growers who have a market for them, perennial crops such as alfalfa are excellent options for getting rid of cleavers, says Neeser. “Cleaver seed doesn’t live that long in the soil – three years is pretty much the maximum. If you need to clean up a field, planting alfalfa, or any type of forage crop, is an excellent option.

But the best management strategy, Neeser claims, is to ensure resistant populations are not given the opportunity to gain a foothold. “In our systems, herbicides are the number 1 and often the only tool for managing weeds in a targeted manner. So the concern is to avoid the emergence of resistant populations.” 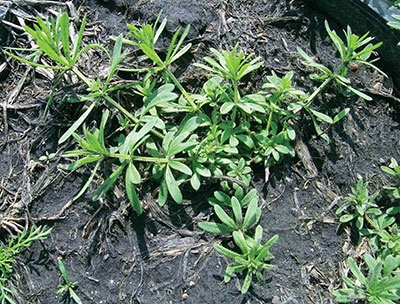 Cleavers overwinter in a vegetative state Cleavers is an annual or winter annual weed that reproduces through seed.