Canola is a booming crop in Canada. Canola oil is the second most widely used oil (behind soybean oil) in North America’s food industry, and for good reason: it offers healthy omega-6 and omega-3 fatty acids, a high smoke point and neutral flavour. And for the past two decades, highly stable high-oleic canola oil has offered additional benefits – an even higher smoke point, as well as better stability for longer-term use in deep fryers.

While acreage of canola is substantial in Canada’s Prairie provinces and fairly steady in Ontario, acreage of canola in the Maritimes has dropped in recent years. In 2013, there were 1,106 acres of canola grown in Prince Edward Island. This number has dropped to only 776 acres in 2014, with fewer than 700 acres estimated for 2015. However, Danny Doyle, a spokesperson for the Prince Edward Island Department of Agriculture and Fisheries, says there is canola research planned. He notes farmers in that province would like to see non-GMO varieties with good clubroot resistance and yield potentials of one metric ton per acre.

New Brunswick’s canola acreage has also drastically dropped in recent years. In 2011, the province grew 10,000 acres of the crop; in 2012, that number dropped to 7,500, then to 6,000 in 2014, and in 2015, only 2,000 acres of canola were grown in New Brunswick. Peter Scott, a crop specialist in the New Brunswick Department of Agriculture, says acreage has shrunk because the forward contract price of canola has dropped off, and a fair amount of clubroot infection in 2014 caused farmers to pause. “It’s always a concern how canola fits a potato rotation,” he adds. “Some growers were producing hybrid canola seed from 2000 to 2005, but some saw potatoes following canola with reduced yields. The thinking is that nitrogen is being tied up to break down the canola residue, and this starves potatoes at a critical time.”

As for Nova Scotia, commercial canola acreage is presently nothing, says Doug MacDonald, scientific officer for the Cereal and Oilseed Research Group in the faculty of agriculture at Dalhousie University in Halifax. “There is only a very small acreage grown by a handful of people,” he notes, “which is crushed in their own small presses for sale at farmers markets or for their own biodiesel.”

However, a great deal of canola research is underway in Nova Scotia. Scientists in the province have been conducting Ontario spring canola variety tests since 2005 (winter canola tests were also done over several years but were discontinued due to limited interest). “The spring canola yields in our small plot tests have averaged approximately 2.7 tons per hectare over the past four seasons,” notes MacDonald. “Winter canola yields have been similar and occasionally better when winter survival is good, which varies greatly from year to year. Complete winterkill is common with the current genotypes available. There is also the concern, with spring or winter canola, of disease buildup – particularly sclerotinia, which can infect some crops used in rotation with canola such as soybeans and potatoes.”

There is also ongoing canola research headed by Prince Edward Island-based Eastern Canadian Oilseed Development Alliance (ECODA), a five-year, $6.7-million canola and soybean research project launched in 2013. It involves researchers in Ontario, Quebec and the Maritimes and is funded through Agriculture and Agri-Food Canada and industry partners. “One project involves winter canola variety evaluation, seeding dates and rates,” explains MacDonald. Jan Holmes, ECODA project manager, says early results showed the varieties of winter canola in the trial had a difficult time surviving, but there may be other varieties that can survive the eastern Canadian winters, and more evaluation is occurring.

The development of effective integrated pest management (IPM) practices for swede midge is also in the works. So far, results show that early and middle pesticide applications are more effective than later ones, but the effect of applications was variable. IPM strategies for the control of other insect pests of canola (flea beetle, pollen beetle and cabbage seedpod weevil) are also being created.

Yet another canola study is focusing on how such factors as crop rotation, nutrient management, planting date and plant density affect the incidence and severity of diseases like stem rot and blackleg. A different project involves determining the effect of fungicides, biological agents, marine bioproducts and combination treatments for the control of these diseases. Further experiments will show the effects of plant population on stress tolerance and seed quality of spring canola, and how canola can best be integrated in a potato cropping system.

“We’re also conducting field trials with best formulations of signal compounds,” Holmes explains, “and have found so far that signal compounds LCO and thuricin at extremely low concentrations slightly increased yield in winter canola. Full study results have the potential to lead to the development of new products, which, in turn, will lead to increased yields.”

Even though it will take more time for the full results of these studies to become available, Holmes believes canola is already economically competitive with small-grain cereals. “It’s a high-value crop that can be useful in rotation with potatoes, corn and soybean,” she says. “Canola is a viable crop option for Eastern Canadian growers, even Maritimes growers who must transport the seed to Quebec for crushing.” 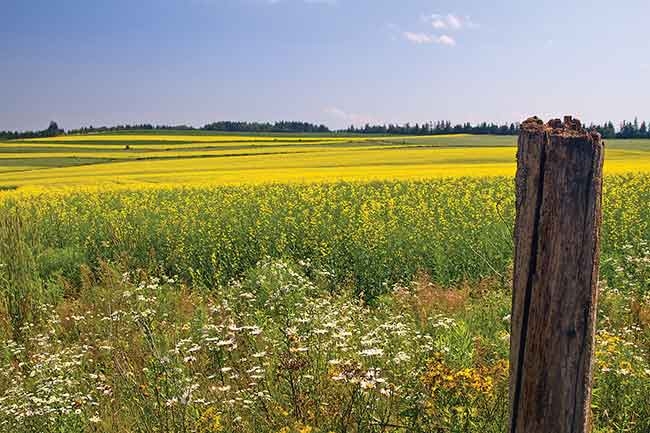 While acreage of canola is substantial in Canada’s Prairie provinces and fairly steady in Ontario Canola is a booming crop in Canada. Canola oil is the second most widely used oil (behind soybean oil) in North America’s food industry
Print this page