Although knowledge about managing canola insect pests on the Prairies can be helpful to growers in Eastern Canada, there may be important differences between the East and the West. That’s why Geneviéve Labrie, an entomologist with the Centre de recherche sur les grains Inc. (CÉROM), has been conducting research on canola insect pests in Quebec since 2009, including a current project on integrated pest management (IPM) strategies for three important pests.

In the East, canola fields are smaller and are scattered around the landscape, rather than the large expanses of canola production seen in the West. Canola pest populations could be lower in Eastern Canada. In addition, differences in insect pest species, species of their natural enemies, weather conditions and other factors could mean pest pressures and crop yield impacts differ from those in the West. So pest management strategies might differ, too.

The project is taking place mainly in Quebec, including sites at three research centres: CÉROM, which is near Montreal; AAFC’s Normandin Research Farm; and Laval University’s Research Farm at Saint-Augustin-de-Desmaures. Her collaborators are Denis Pageau with AAFC-Normandin and Anne Vanasse with Laval. The project also has between four and 11 sites at canola producers’ farms around Quebec City and in the Saguenay–Lac Saint-Jean region, one of the province’s main canola-growing areas. As well, Christine Noronha, an entomologist with AAFC in Prince Edward Island, is conducting some insecticide trials for the project.

The project started in 2013 and will be completed in 2018, but it is already making valuable progress.

Weevil control – for free
Through this research, Labrie has made an exciting discovery: the cabbage seedpod weevil is being transformed from a major pest into a non-issue by a parasitic wasp spreading across Quebec canola fields.

The cabbage seedpod weevil (Ceutorhynchus obstrictus) feeds on canola throughout most of its life cycle. After overwintering, the adult feeds on canola’s flower buds. The female weevil usually lays one egg per canola pod. The larva feeds inside the pod. When the larva reaches maturity, it falls to the ground and pupates in the soil. A week or two later, the adult emerges and feeds on canola pods. The most serious crop damage is due to larval feeding.

This weevil was first reported in Canada in 1931, when it was found in British Columbia. Since then, it has been spreading across Canada and the United States. The weevil was first found in Quebec in 2000 and in Ontario in 2001.

“Quebec canola growers had a lot of problems with the cabbage seedpod weevil between 2000 and 2010,” Labrie says. “But in my research, we’ve discovered that we have a parasitoid now.”

The parasitoid is a tiny wasp, Trichomalus perfectus. This wasp lays a single egg into a larva of the weevil. The wasp larva feeds on the weevil larva, eventually killing the weevil. Labrie notes, “This parasitoid is the best natural enemy of the cabbage seedpod weevil in Europe.”

Labrie discovered the parasitoid in 2009 when she began her work on the cabbage seedpod weevil. Peter Mason, an entomologist with AAFC in Ottawa who was doing a lot of research on the weevil during the 2000s, also first found the wasp in that same year. So it likely arrived in the region in the late 2000s, probably from Europe.

The wasp has been rapidly spreading in Quebec since 2009. “Now in my ECODA research project, we have found the parasitoid at almost 70 per cent of our sites all around Quebec, and the cabbage seedpod weevil is almost completely controlled by the wasp,” Labrie says. These days, very few Quebec canola growers need to apply insecticides to control the weevil.

Mason has observed the parasitoid in the Ottawa area, so it’s known to be in Quebec and Ontario, but so far it hasn’t been found in other parts of Canada. However, if the wasp continues to spread, it could help canola growers in other regions.

Labrie’s ECODA research on managing the weevil is taking place only in fields where the parasitoids are not yet present. The focus of this research is to determine the economic thresholds for applying insecticides to control the weevil, taking into account that a higher threshold will be needed because of the potential for very effective natural control if the parasitoid migrates into these fields.

Flea beetles: it’s all about timing
In her flea beetle studies, Labrie is working on ways to use canola planting dates to fight these beetles, which are a big concern for many Quebec canola growers.

“In the Saguenay–Lac Saint-Jean area, flea beetles often will consume a complete field when canola is at the cotyledon stage, so at the emergence of canola,” Labrie notes. “To control flea beetles, producers in that area use seed treatments, and many of the producers also use two or three foliar insecticide applications. So there is not a lot of economic gain for the producer, and it is a lot of pesticide in the environment.”

Two flea beetle species are important canola pests: the crucifer flea beetle (Phyllotreta cruciferae) and the striped flea beetle (Phyllotreta striolata). The adults of both species overwinter and become active in the spring. They feed on canola seedlings and lay their eggs near the roots of canola plants. The larvae feed on the roots and then pupate. The adults emerge in the summer, feed on canola crops and then go into hibernation in the fall.

Through her field studies, Labrie has discovered that the flea beetle populations have shifted almost entirely to striped flea beetles, possibly because the striped species is less susceptible to insecticide seed treatments than the crucifer flea beetle, as shown by studies in Western Canada.

She has found that the worst flea beetle damage occurs when the timing of the crop’s emergence is synchronized with the emergence of the beetles from hibernation. “When the first canola field emerges in an area, any flea beetles that are emerging from hibernation at the same time will go directly to that field and consume everything, even if the canola has been treated with an insecticide seed treatment.”

Labrie is conducting seeding date trials to figure out when to seed the crop so that it will emerge either before or after the beetles come out of hibernation, to avoid that destructive synchronization.

She is also experimenting with trap crops as another way to reduce insecticide inputs and decrease crop damage. The idea is to seed canola in a small area, timing the seeding so the plants will emerge just as the beetles come out of hibernation. That way, the beetles will be attracted to the trap crop, allowing the grower to control the pest by spraying that small area. The grower’s main canola crop is seeded slightly later than the trap crop, avoiding the worst of the flea beetle attacks.

In 2014, the trap crops worked very well. In 2015, spring weather conditions prevented the co-operating producers from getting onto their fields to seed at the right times. She’ll conduct the trap crop trials again in 2016.

Also in 2016, Labrie will be working with an AAFC colleague to develop a model for identifying the optimum planting dates to reduce flea beetle damage in Quebec’s canola-growing areas. The model will make use of four years of data from Labrie’s research on canola planting dates and emergence dates and flea beetle arrival dates, as well as climatic data and knowledge of how temperature and moisture conditions affect the timing of canola emergence and beetle emergence.

Pollen beetles: new and scary
Although the pollen beetle (Brassicogethes viridescens) isn’t yet a yield-limiting pest in Quebec canola crops, it has the potential to cause very serious problems. So Labrie’s project will help growers to be ready to deal with this threat.

Adult pollen beetles feed on canola pollen and buds. The females lay their eggs in the flower buds, and the larvae feed inside the bud, destroying the plant’s ability to produce seeds. According to Labrie, this beetle is common in Europe where it can cause 70 or even 80 per cent yield losses in canola.

In Canada, the pollen beetle was first recorded in Nova Scotia in 1947. Since then, the beetle has been reported elsewhere in the Maritimes and Quebec. In Quebec, it was first discovered in 2001, but only in the past two or three years have high populations been found. The beetle has spread to Saguenay–Lac Saint-Jean, but is not yet in Abitibi–Temiscamingue, the other major canola production area in Quebec. Modelling by AAFC researchers shows that, if the beetle spreads to the canola-growing regions in Ontario and Western Canada, it would readily survive there.

Currently in Quebec, the pollen beetle is most common in the Bas-Saint-Laurent area, which is the province’s third most important canola-growing area. The beetle first appeared in that area in about 2011 and its numbers have been rapidly increasing since then. “Between 2012 and 2015, we observed a 58 per cent increase in population in that area,” Labrie says.

“Fortunately, in Quebec at present, the pollen beetle’s life cycle is not synchronized with the sensitive stage of canola [which is during stem elongation as the buds appear].” Instead, the beetles tend to arrive in canola fields between 10 and 30 per cent flowering. At that crop stage, a lot of pollen beetles would be needed to cause significant yield losses.

However, Labrie suspects that, as Canadian winters continue to warm, the pollen beetle will emerge from hibernation earlier in the spring, so its life cycle could become better synchronized with the sensitive stage of canola.

Labrie notes that no insecticides are currently registered for use on pollen beetles in Canadian canola crops. Her project is testing different active ingredients to see which ones are most effective. She adds, “It is a species that can become insecticide-resistant very rapidly; in Europe, the pollen beetle is resistant to a lot of insecticide products. So insecticide rotations will be important.”

The project is also determining economic thresholds for insecticide applications to control the pollen beetle. The results so far indicate that about three to nine pollen beetles per plant would be needed at the sensitive crop stage to cause yield losses. Currently, pollen beetle numbers are not that high at the crop’s sensitive stage. “But if its population is increasing and it is synchronizing its life cycle with canola, then the pollen beetle could be a really serious problem,” she cautions.

To provide canola growers and agronomists with the latest information from all her canola pest studies, Labrie makes presentations at conferences every year. This information – including economic thresholds, timing of crop damage and alternatives to insecticides – will help growers in making decisions about managing canola insect pests. 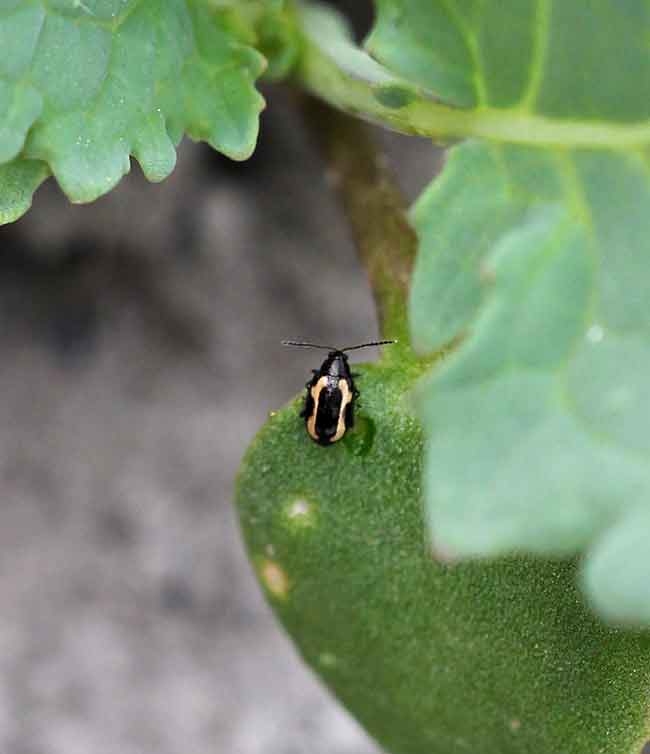 The greatest flea beetle damage occurs when the timing of the crop’s emergence is synchronized with the emergence of the beetles from hibernation.