As the world’s largest producer and exporter of canaryseed in the world, much of it in Saskatchewan, this market is definitely for the birds. Used primarily in commercial bird feed – think budgies and canaries – for growers, one of the production priorities is weed control.

“Early in the growing season, canaryseed is not very competitive. Once it gets to the five- to six-leaf stage, it starts to become more competitive,” Bill May, research scientist with Agriculture and Agri-Food Canada (AAFC) at Indian Head, Sask., says. “Early weed control is important.”

Back in the early days of canaryseed production, researchers recognized weed control was a priority. As early as the late 1980s, research identified that canaryseed yield was reduced by competition from wild mustard, cow cockle and wild oats. However, AAFC researchers Neal Holt and Jim Hunter reported excellent crop tolerance to Pardner (bromoxynil), Buctril M (bromoxynil + MCPA), Lorox (linuron) + MCPA, Stampede (propanil) + MCPA, and Sencor (metribuzin) + MCPA. The broadleaf weed control also resulted in yields that were similar to the weed-free check. Grassy weed control from Avenge (difenzoquat) provided acceptable wild oat control in one out of two years and good crop tolerance in both years of the research.

Growers in the know, though, will recognize a dwindling list of herbicides from these 1980s trials. Stampede is gone, and more recently in 2014, the U.S. revoked the maximum residue limits (MRL) on Avenge, and it is no longer available. Plus, Linuron and Sencor are not registered on canaryseed, so choices from the early days of canaryseed production are shrinking.

In the early 2000s, May built on the previous weed control research and looked at some of the newer herbicides on newer canaryseed varieties grown in no-till production systems. Avenge was still on the market and included in the research, along with combinations of MCPA, clopyralid, fluroxypyr and florasulam. The research covered three years at Indian Head, Saskatoon and Scott, Sask.

A time of application at two- to three-leaf, and four- to five-leaf was also included in the research.

Where crop injury did occur, canaryseed exhibited the ability to compensate for early season injury by producing tillers. Injury was more likely with the early leaf stage applications. However, May says growers should consider weed pressure when looking at application timing, and if it is high, early herbicide application may be beneficial. In fact, the research showed even if injury occurred at the two- to three-leaf stage, yield was still greater than if herbicide application was delayed to the four- to five-leaf stage. He says slight injury from herbicide is less important than ensuring early application to reduce early-season weed competition.

Today’s weed control options
Today, canaryseed growers have a good selection of broadleaf herbicides to choose from, and most of them control some of the more common and tough broadleaf weeds such as cleavers, kochia, hemp-nettle, perennial thistle and dandelion. The registered broadleaf herbicides also provide good mode of action rotational options with Group 4s and a Group 6 herbicide. (See Table 1.) 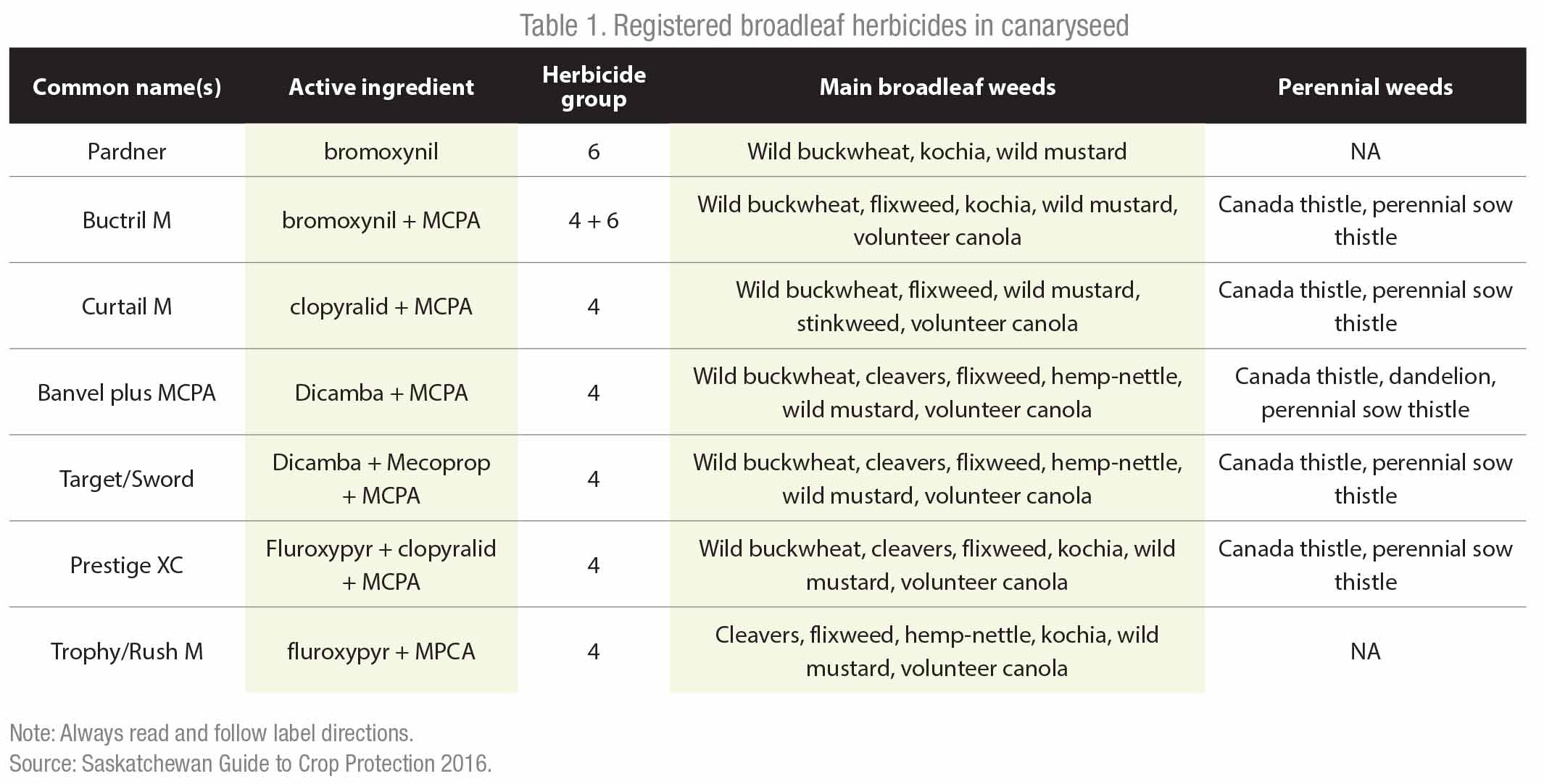 May says he has seen crop injury from Group 2 herbicides like Refine Extra, and that growers should avoid using any Group 2 product on canaryseed.

“Stay with labeled broadleaf products. There are some good choices and they provide acceptable weed control,” May cautions.

“Avadex provides a good opportunity to rotate herbicide mode of action on wild oat. Canaryseed growers are kind of forced into rotating to the Group 8 mode of action, which is probably a good thing, as it helps to delay herbicide resistance,” May says.

Information from Saskatchewan Agriculture indicates that “canaryseed should not be seeded until at least the second season following an application of Assert or Unity. Fields treated with Ally, Glean, Amber, Muster, Everest, Sundance or Pursuit should not be sown to canaryseed until a field bioassay determines it is safe to do so. Extended periods without rainfall during the growing season may extend the re-cropping restrictions on residual products. This may also impact waiting periods for products like Odyssey that do not have restrictions for the following year under normal moisture conditions.” 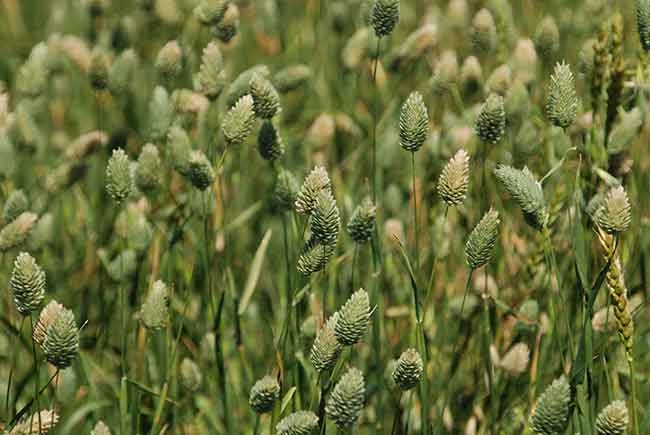