Not everyone has heard of Kingston, Ontario-based Performance Plants Inc. (PPI) – but those who are not yet familiar with the company are likely to hear about it sooner rather than later. Simply put, PPI is an ag-biotech superpower with growing international ties, holding more than 100 global patents for breakthrough gene technologies. 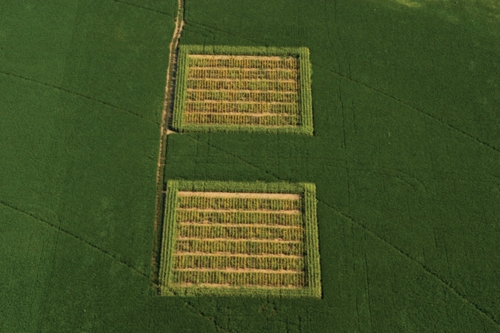 Performance Plants Inc. Corn YPT field trial Not everyone has heard of Kingston

The company’s “Yield Protection Technology” (YPT) trait, for example, enables plants to better tolerate drought conditions, and to recover faster when water again arrives. It was the first genetic enhancement identified and developed by PPI and will be commercially ready by 2015. The trait allows plants to close their stomates (leaf and stem pores) earlier and more tightly as a drought sets in, preventing transpiration moisture loss. “The devastating drought this season that occurred in many parts of Canada and the United States has definitely created tremendous interest in developing drought-tolerant crop varieties,” Huang says. “Furthermore, drought often comes with high temperature conditions, and with these two factors, crop yields suffer.” (PPI has already created Heat Tolerant Trait Technology, and Heat & Drought Dual Tolerance Technology.)

Over five years of field trials, canola with YPT has achieved yield increases of up to 26 percent. Huang says PPI’s leading YPT canola has an average of 17 per cent higher yield than its parental control (same seed without the YPT trait) in three consecutive years of controlled irrigation field trials done in Southern Alberta. “The YPT trait was transformed into the elite DH12075 canola variety, which was developed and commercialized by Agriculture and Agri-food Canada,” he says. “Results from these field trials suggest that with adequate water, transgenic YPT canola produced the same amount of seed as the parental control. However, under moderate water stress conditions at flowering, the seed yields of transgenic canola were significantly higher than the control.” There are many factors that can cause difference in yield in the field trials, Huang notes, such as the amount of water received during flowering and the timing of drought stress.

Like PPI’s other traits, YPT is a broad-based technology that is applicable to all major crops. “As most staple crops are sensitive to drought stress, application of YPT should result in some profound effects on enhancement of productivity of these crops,” says Huang. All of PPI’s technologies use only the traits of the native crop involved. The company has identified traits that protect the plant from adverse growing conditions and it manipulates these traits like an “on / off switch,” as described in the earlier paragraph on YPT, using the plant’s own responses to “weather-proof” the crop and yield returns despite such adverse environmental changes as drought and heat stress conditions.

Other markets
“According to many classical agronomic studies, on average, farmers in North America are harvesting only 21 percent of the yield that crops can produce genetically,” says Huang. “Nearly 70 percent of yield is lost through suffering abiotic stresses such as lack of water, excessive heat, cold, salt, heavy metals and others. There are therefore tremendous opportunities for plant geneticists to discover different mechanisms to deal with these stresses and create new super high-yielding varieties for growers.”

PPI is also doing work outside the arena of food crops. For example, the firm describes its Biomass Enhancement Technology (BET) trait as “ideally suited for large biomass applications such as biomass feedstock for cellulosic ethanol and coal replacement, as well as fibre and forage.” BET works by boosting vegetative plant growth. Another example is the Enhanced Conversion Technology (ECT) trait, which “resolves the second half of the biofuels dilemma – making a plant’s tough cell walls more easily converted to biofuel.” As it grows in partnerships, patents and breeding expertise, PPI as a company will also grow. It intends to be worth $420 million by 2020.

Yield Protection Technology (YPT)
YPT enables plants to better tolerate drought conditions and to recover faster when watered. It was the first genetic enhancement identified and developed by PPI and will be commercially available by 2013. In five years of field trials, canola enhanced YPT has shown yield increases of up to 26 percent. YPT has been licensed to some of the world’s leading seed companies such as Bayer CropScience and Dupont-Pioneer.

Heat Tolerance Technology (HEAT)
HEAT is the first and only heat tolerance trait that protects plants from excessive heat. In controlled growth chamber experiments, HEAT plants have produced up to 23 percent higher yields when challenged with typical periods of hot growing conditions. This technology is currently being assessed in canola and other crop species.

Water Efficiency Technology (WET)
WET is a genetic trait technology that allows plants to grow with less water. Greenhouse experiments have shown that WET plants produce 22 percent more growth with limited water. WET is ideal for crops that are rain-fed or grown with less than optimal irrigation. Demonstrations of this technology in canola and other crops are currently underway.

Biomass Enhancement Technology (BET) is an ideal trait for biofuel crops as it has been shown to deliver 50 percent more biomass by boosting vegetative plant growth.