Features Other Crops Genetics/Traits
Camelina on the rise

This oilseed provides economic and environmental benefits for industrial, feed and food applications. 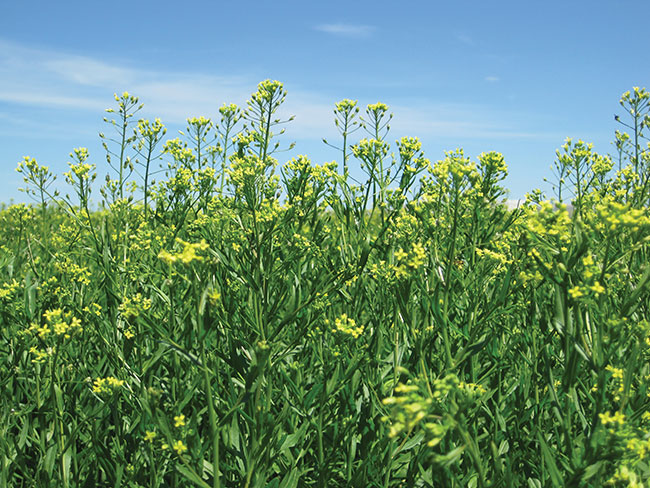 Camelina crop in flower. All photos courtesy of Christina Eynck.

Researchers continue to find new opportunities for camelina focused on improving functionality and traits for various applications. Also known by the name false flax, this versatile Brassica oilseed has potential across a wide range of applications, and interest in the crop is growing among Canadian researchers and several different industries. Camelina provides both environmental and economic benefits, including offering new cropping opportunities in more arid zones and marginal areas.

Researchers with Agriculture and Agri-Food Canada (AAFC) at the Saskatoon Research and Development Centre have multiple projects underway with various collaborators across the country. Breeding programs are focused on agronomic and quality improvements as well as genomic traits and functionality improvements.

“The key traits we are targeting for improvement of camelina are similar to those that are the focus of other oilseed breeding programs, including high seed yield and high seed oil content as well as disease resistance – in particular downy mildew and sclerotinia stem rot,” explains Dr. Christina Eynck, a research scientist at AAFC Saskatoon.

“Another focus of our program is to increase the size of camelina seed, which for current varieties is small and about one-third of the size of canola seed. This small size can cause challenges for seeding, combining and crushing. In our experience, breeding lines with larger seeds have an easier time getting out of the ground resulting in better stand establishment, which is absolutely critical for a successful camelina crop.”

Another research priority is to develop germplasm with both high oil and high protein content. To expand functionality, researchers have examined camelina improvements from across the globe for seed protein levels and the different types of proteins in the seed. Camelina is known for having a healthy oil profile, but researchers are working on improving the fatty acid profile for food and feed applications. The goal is to develop an even more favorable ratio of omega-3 to omega-6 fatty acids, mainly by increasing the content of linolenic (C18:3) acid and decreasing the content of linoleic (C18:2) acid.

Fish food and more
Along with oil functionality, camelina meal is also being explored as a source of protein in livestock, fish, and poultry feeds, and potential human food applications.

“Camelina oil contains precursors that fish can convert to docosahexaenoic acid (DHA) and eicosapentaenoic acid (EPA), both omega-3 fatty acids essential for human health. The group has also filed an application with CFIA to partially replace fish meal protein with camelina protein. Collectively, these will reduce the strain on wild-caught fish as a source of feed for the farmed fish industry – an annual $1 billion and growing fish feed market – at the same time as providing a growing market for camelina.” Camelina seed meal has also been successfully approved in Canada as a feed ingredient for both broiler and layer hens.

While camelina is better than most oilseeds and grains used in animal feeds, it is deficient in certain essential amino acids to be a complete protein, specifically lysine. Lysine is one of the essential amino acids that the body cannot make in sufficient quantities itself and must be acquired from diet. Synthetic forms of this amino acid are often added to the diets of monogastric livestock, including pigs, chicken and fish. With support from the Global Institute for Food Security at the University of Saskatchewan, Hegedus and AAFC colleague Dr. Kevin Rozwadowski used genetic engineering tools to enhance lysine levels in camelina seed and incorporate this into camelina seed protein.

AAFC researcher Dr. Isobel Parkin worked with National Research Council of Canada (NRCC) researchers to sequence the camelina genome and make this resource available to the public. “One of our AAFC research scientists, Dr. Janitha Wanasundara, was able to use this resource to catalogue the entire suite of storage proteins in camelina seeds and examine alternate uses for camelina protein or specific proteins from camelina,” Hegedus says.

“Some of these opportunities include use in foods, cosmetics and surfactants, which offer higher value and benefit than animal feed. Kevin and I took this another step further, using CRISPR gene editing to alter camelina seed protein profiles, resulting in a line with a unique protein profile and functional properties. This demonstration, one of the first of its kind, opens the door to creating lines with protein profiles tailored to specific applications.” 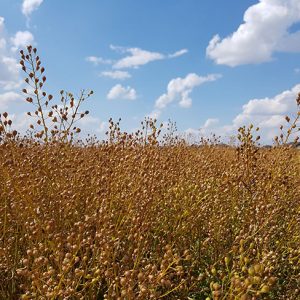 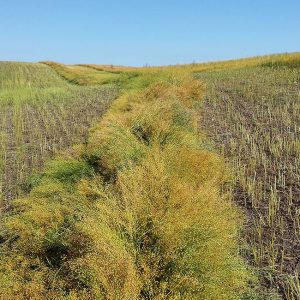 Camelina crop in the swath in west-central Saskatchewan. 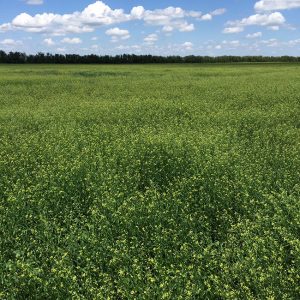 A flowering camelina crop in the field.

“Our research program at AAFC also includes the sustainable development of camelina as a key dedicated oilseed feedstock crop for industrial applications,” explains Dr. Edmund Mupondwa, research scientist for bioproducts and bioprocesses at AAFC Saskatoon. “Sustainable feedstock development is a critical component of an assured supply chain. Canadian research is actively developing camelina as a dedicated industrial feedstock in a manner that meets environmental sustainability criteria for production and value-added processing.”

Camelina as a feedstock for aviation fuel is well-recognized by the aviation industry, and has the potential to address the growing demand for alternative renewable aviation fuels in Canada. Conventional aviation fuel contributes around two to three per cent of global carbon dioxide emissions, which can potentially be reduced by including camelina.

Environmental and economic benefits
“In addition to our LCA camelina for clean energy applications, we are also conducting additional related studies to demonstrate the environmental and economic contribution of camelina feed to the aquaculture sector,” Mupondwa adds. “This is particularly relevant in view of declining ocean fisheries stocks, coupled with increasing demand for fish driven by a growing world human population. As a result, there is a rapid expansion in aquaculture, making it one of the fastest growing markets for feed. Camelina could contribute to environmental sustainability and economic goals for this sector.”

Camelina is a crop that grows comparatively well on low quality land and under low precipitation. It also requires fewer inputs than other Brassica crops and has a comparatively high yield potential on poor quality land. Eynck notes that some important agronomic attributes of camelina include a short growing season (85-100 days), resistance to a number of Brassica pests and diseases, including flea beetles and blackleg, and shatter resistance, making it suitable for straight-combining. Camelina is also frost-tolerant in the seedling stage and drought-tolerant in later developmental stages. With these characteristics, camelina is a good choice for farmers that want to reduce the risks associated with production.

Some of the geographic areas most suited for camelina production on the Prairies are the sandy soils of west-central Saskatchewan and the brown soil zone in southwest Saskatchewan and southeast Alberta. Other areas work too, as long as the economics make sense. For example, camelina is successfully grown in southeast Saskatchewan by the Three Farmers company, who sell camelina oil as a high-end edible oil. Over the last few years, camelina acres in Saskatchewan have stayed around 5,000, but are now increasing significantly with Smart Earth Camelina Corp. contracting more acres for the 2020 growing season. Currently, camelina is exclusively grown under contract and is covered under crop insurance in Saskatchewan.

As the new traits and functionality attributes improve, new elite breeding lines will be released and evaluated for commercialization potential. “We would like to have new varieties coming out of our breeding program and commercially available every two or three years,” Eynck says. “One exciting additional focus of our program is the development of true winter-type camelina varieties. Unique for a Canadian oilseed, camelina features not only annual spring-types, but also winter-types with exceptional freeze hardiness that rivals that of winter rye and far surpasses that of winter canola.

“Trials in Manitoba and Saskatchewan have shown that winter camelina is hardy enough to survive well in the harsh winters of the Prairie provinces. With this, camelina has the potential to become the only winter-type oilseed that can be grown on the Canadian Prairies, offering a winter rotation alternative for winter cereals and providing a ground-breaking opportunity to finally facilitate the establishment of winter crops as a viable rotation option for farmers on the Canadian Prairies.”

Eynck concludes, “The cumulative efforts of crop breeding, agronomic and functionality improvements in cultivars, along with new genomic improvements for specific applications for food, feed and industrial applications, all add to the growing opportunity and potential of camelina on the Prairies.”