“When you’re trying to decide how much fertilizer to put down, you need a strategy,” says Horst Bohner, provincial soybean specialist with the Ontario Ministry of Agriculture Food and Rural Affairs (OMAFRA).

It might seem like a statement of the obvious, but right now, there’s no “obvious” strategy for maintaining nutrient levels in soil. In fact, there are multiple strategies, especially when it comes to nutrients such as phosphorous (P) and potassium (K). 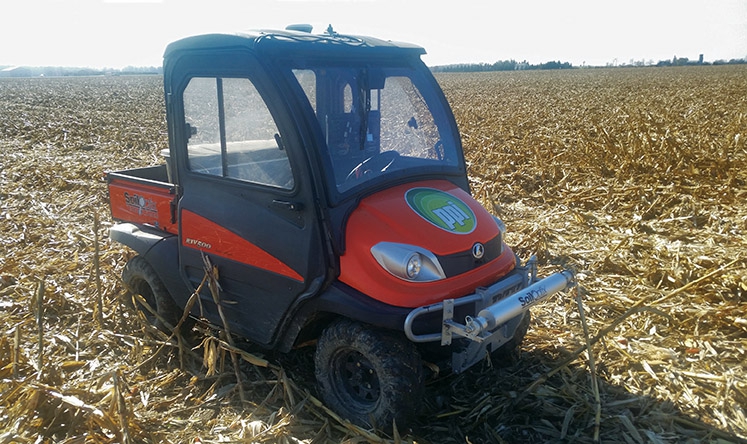 SoilOptix is a digital high-resolution top soil mapping system that includes a calibrated sensor – a gamma ray spectrometer – to assess the geological properties of the soil.

Bohner is part of a collaborative long-term study that began in 2012, evaluating two different approaches to P and K fertility management – the “sufficiency” approach and the “build and maintain” approach – on four sites with three-year winter wheat, corn and soybean rotations.

“The sufficiency approach, or ‘feed the crop’ approach, is a way of looking at each individual crop for that year and maximizing your profits by adding what is sufficient for that year,” Bohner says. “It’s not giving you the highest yield possible, but the maximum economic return.”

This approach is contrasted with the “build and maintain” approach, which Bohner says is a longer-term strategy.

“For some nutrients that leach or disappear throughout the growing season, like N [nitrogen], the sufficiency approach is the only way to do it because it’s a short-lived nutrient and there’s no long-term approach. That’s common sense,” he says.

“But for other nutrients that don’t move as much and can be stored in the soil to some extent, like P and K, you could
imagine that you might be better off to build the soil to a reasonable level, and that takes out some of the variability.”

Old data
The study has been a long time coming. The province’s current P and K fertility recommendations were established more than 30 years ago, when yields were much lower. Since 1981, corn yields have increased by 80 per cent, winter wheat yields by 65 per cent and soybean yields by 35 per cent, according to the team’s 2015 Field Crop Report.

These recommendations were based on the sufficiency approach. Bohner says although they have worked well for producers, the yield increases mean more nutrients are removed from the soil at harvest, potentially limiting crop response. But he’s quick to note adding more nutrients may not necessarily be the answer.

“The last thing we want to do is put on excessive amounts. Economics drives a lot of this, and these are costly inputs. Farmers want to do the right thing in terms of the environment and the pocketbook,” he says.

David Hooker, a field crop agronomist and assistant professor at the University of Guelph’s Ridgetown campus, says preliminary data suggests there is already some early indication that crops respond well to higher background levels of P and K versus the sufficiency approach.

Hooker manages the Ridgetown site, representing a large corn, wheat and soy producing area. (The other three sites involved in the project are located in Elora, Bornholm and Lucan.)

He says crop yield response depends on the yield potential as well as the cation exchange capacity (CEC) of the soil – an efficiency factor that plants respond to in terms of how much P and K are available to the crop.

“A high testing CEC soil tends to retain a lot of the P and K nutrients and does not release these to plant growth. An example is clay soils,” Hooker says. “In these conditions you’d need more P and K fertilizer to show a response, compared to a sandy soil where P and K nutrients aren’t held very tightly to soil particles and the response to the fertilizer might be higher.”

Though soils can vary greatly across Ontario regions, they can also vary within a single field.

“Within any of these trial locations, and any field, we often forget that the variability within a field is tremendous, especially with P,” Bohner says.

But so far the study has demonstrated that consistent, higher yields result when soil fertility has been built up over time. “I think it’ll shake out that if your soil test is a low number in PPM [parts per million], you simply can’t put on enough with the planter to get maximum yields. You’re going to have to build that soil to a reasonable level,” he predicts.

Precision applications
Hooker believes there will be major applications for this research in precision agriculture in the near future. Producers will be able to assess P and K fertilizer responses and use the data to apply P and K variably across the field.

But P and K are notoriously difficult to measure using soil tests; levels might change within a single metre. “Soil testing tends to get expensive in a hurry,” Hooker says.

More data is needed to understand how P and K work in the soil, and how to keep the levels up. But regardless of what precision agriculture applications might include in the future, Bohner believes the basic P and K management research the team is doing is essential.

“These are fundamental questions we need to know as producers: how to best treat the soil in the cropping system for long-term sustainability, how to handle P and K in the long-term,” he says.

“In today’s world you cannot ignore the other factors of sustainability. It’s not just about getting the highest yield but the most profitable and sustainable system.”