Try this exercise. Take five $20 bills, scatter them on the ground, then light one on fire and watch it go up in smoke. That’s what researchers at the Montana State University (MSU) found could happen if you broadcast urea fertilizer in the late fall or winter without incorporation. Previously, it was commonly thought that broadcast urea on cold soils would not result in very large urea losses.

“Cumulative losses, expressed as a percentage of applied N rate, averaged 16.1 per cent for 23 trials conducted between 2008 and 2014, and there were trials where losses were greater than 20 per cent,” says lead researcher Richard Engel with the land resources and environmental sciences department at MSU at Bozeman, Mont., who collaborated with colleague Clain Jones.

The trials were established to quantify ammonia (NH3) volatilization loss from surface applications of urea and determine under what conditions urea became susceptible to volatility. A total of 23 trials over seven years were conducted on private farms in Hill, Fergus and Gallatin Counties.

In Montana, winter wheat growers commonly broadcast urea fertilizer on winter wheat, often during cold weather in late fall and extending into early spring, and typically on frozen ground with a modest snow cover. On the Canadian Prairies, the practice of fertilizing over the winter months is less common because of our heavier snow pack. The research provides a glimpse into scenarios in which losses can be high from broadcast urea, whether applied in the late fall or early spring prior to seeding.

Volatilization 101
When applied to soil, urea granules dissolve when in contact with moisture and are converted to ammonium (NH4+). Engel says that at the same time, the pH in the soil microenvironment rises and ammonium becomes unstable, and part of it can be lost to the atmosphere as NH3 gas. Not only is part of your fertilizer dollar going up in smoke, but NH3 gas also contributes to greenhouse gases. A 20 per cent volatilization loss not only costs money – about $10/ac with urea around $554/t and a 90 lbs/ac fertilization rate – but it can also potentially affect yield and protein.

In the Montana research, ammonia losses were quantified using a micrometeorological mass-balance approach with circular plots (0.3 acre), a center mast and samplers that provided for continuous measurement of NH3 loss. Ammonia samplers were exchanged approximately once per week over trials lasting up to 12 weeks.

In the trials, Engel found that surface moisture conditions at the time of fertilization and precipitation amounts and timing following fertilization had a large impact on NH3 loss. He looked at worse case scenarios where losses were greater than 20 per cent. A commonality of all high NH3 loss trials was the soil surface at time of application was high in water content or covered with a modest depth of snow. Precipitation events that followed application were light (less than 0.2 inches) and scattered through the first 30 days after fertilization. The urea granules dissolved quickly resulting in very high NH3 losses during the first week following fertilization.

“One example is provided by a trial west of Havre, Mont. Urea was applied to a very moist soil surface with a light dusting of snow. Within 30 minutes following fertilization, the urea granules started to dissolve,” Engel reports. “NH3 loss was equivalent to 22.4 per cent of applied N over the first week following fertilization as the soil dried.” (See Fig. 1.) 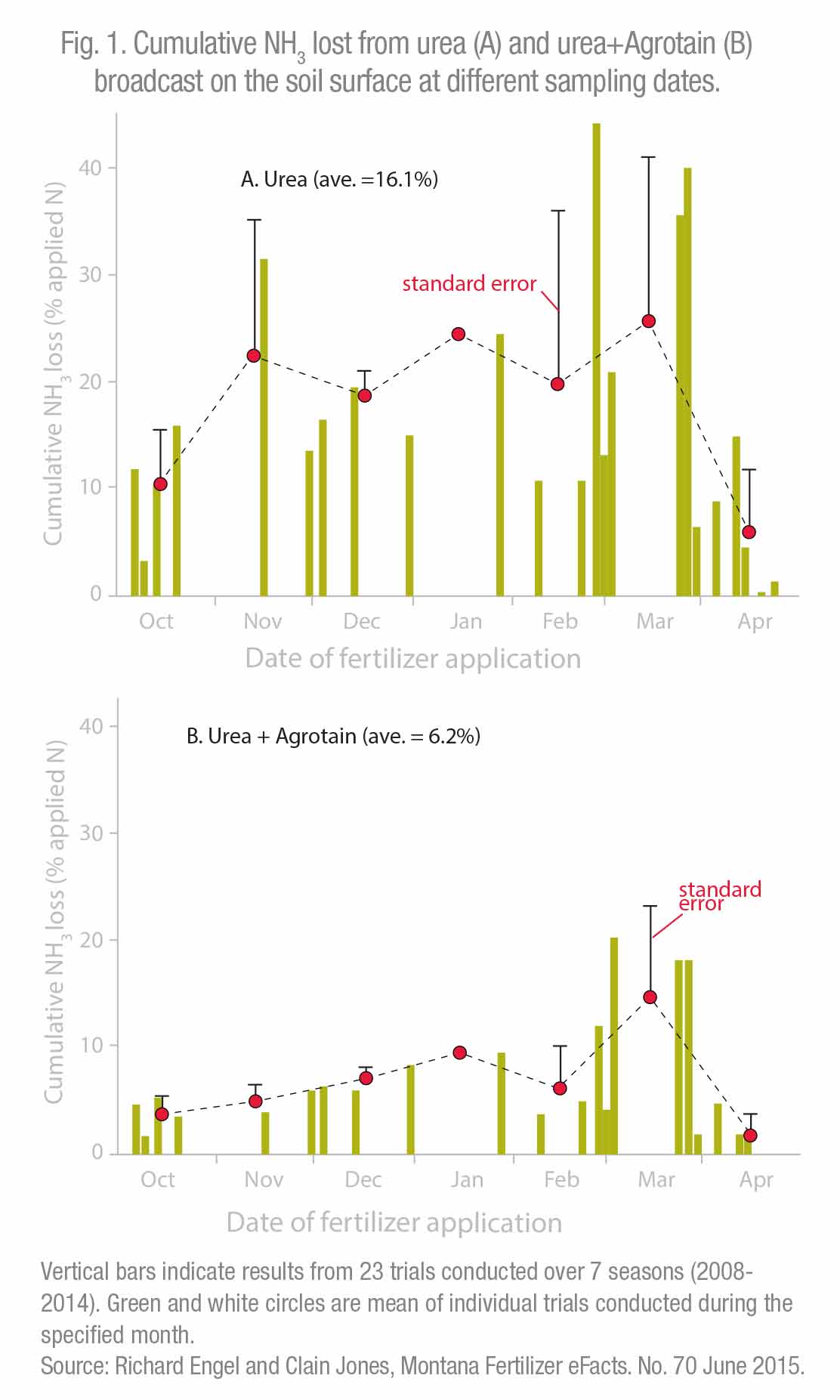 Avoiding volatilization losses
To avoid NH3 losses, broadcast application of urea should avoid the conditions that cause large losses – wet soils and scattered, light precipitation. In the research trials, Engel observed losses were lower (typically less than 10 per cent) if urea was broadcast onto a dry soil surface and a large precipitation event of more than 0.7 inches fell within a few days of application. In Montana, these conditions commonly occurred in April. Applications from November through March, when precipitation is lighter and more scattered, all resulted in losses more than 10 per cent.

Engel also looked at the use of Agrotain, which contains a urease inhibitor. Urease inhibitors slow the rate of urea hydrolysis. He found that adding Agrotain typically reduced cumulative NH3 loss by 60 to 65 per cent compared to untreated urea.

For Canadian farmers, the lessons learned are to try to time broadcast urea applications in the early spring with significant rainfall in the forecast. Ideally, apply to a dry, cold soil, and then get at least one half-inch of rain shortly after application. However, as the soil and air temperature warms up, and if there is enough moisture to dissolve the urea granule, then the risk of volatilization goes up as well.

Another practice would be to dribble band 28-0-0 (UAN) liquid fertilizer, but one-half of it is still in the urea form and susceptible to volatilization as well. And the use of a urease inhibitor would be a good practice as well.

A report on the research is now available online at http://landresources.montana.edu/fertilizerfacts/. 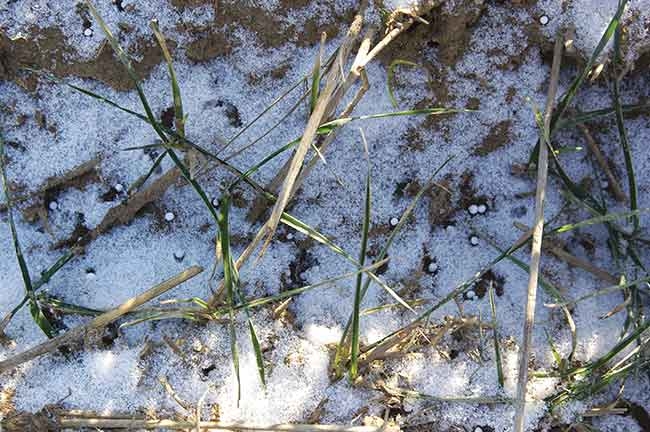 NH3 loss was equivalent to 22.4 per cent of applied N over the first week following fertilization as the soil dried. Research in Montana provides details.