Alberta researchers are developing high-performing varieties to meet the needs of this small but important barley market. 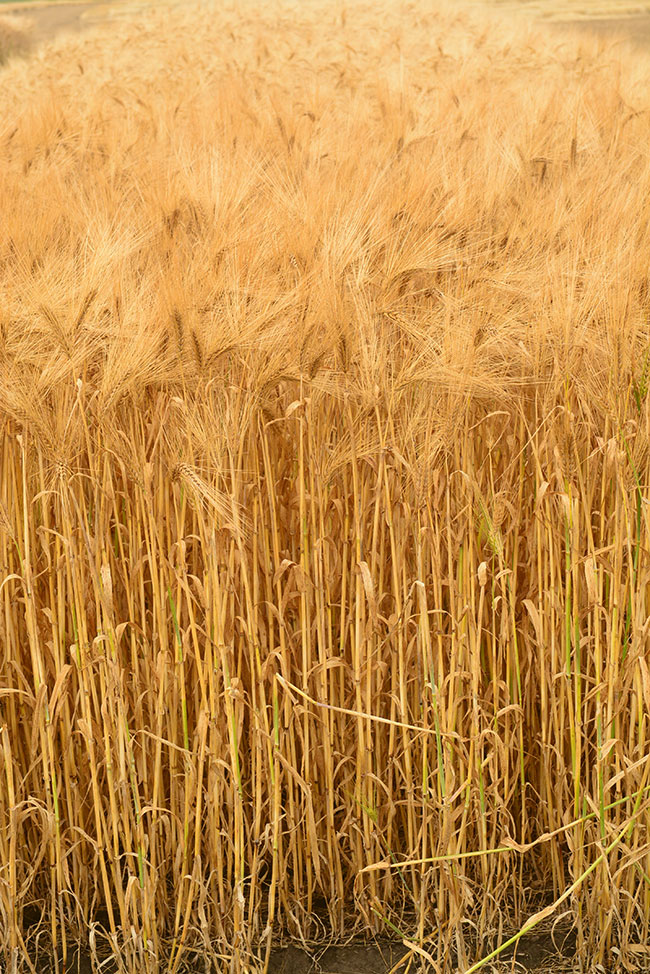 We believe there is a market for six-row barley varieties in Canada, given the estimated 500,000 acres planted each year. We have a small but strong six-row breeding effort that is now the only six-row breeding in Canada. If we end our six-row work, that option will disappear for Canadian farmers,” says Flavio Capettini, head of research at the Field Crop Development Centre (FCDC) of Alberta Agriculture and Forestry (AAF) in Lacombe.

The six-row feed and forage barley varieties developed by FCDC breeders have the characteristics needed by barley growers and end-users, such as higher yields, improved standability, better disease resistance and enhanced nutritional value for livestock. Capettini notes, “We have been very successful in releasing six-row varieties that have been placed in the commercialization process right away by seed companies.”

Until recently, FCDC generally separated the responsibilities of its barley breeders into two-row and six-row programs, but these responsibilities have now been refocused based on the target uses and separated into malting, feed and forage barley programs. However, the breeding lines from the different programs are also evaluated for the different end uses, to look for dual-purpose lines and for lines that fit a different target use, like a cross aimed at malting barley that results in a good feed or forage line.

These barley breeding programs tap into the overall synergy of expertise and resources at FCDC. The centre’s other breeders include Capettini, who leads the barley germplasm development research, and Mazen Aljarrah, who leads the triticale program. As well, FCDC has other expert teams whose work is essential as part of the centre’s breeding programs, and a capable group of technicians and other staff who carry out the meticulous, specialized and labour-intensive activities involved in crop breeding.

Some of FCDC’s disease screening activities are done in collaboration with other research centres, such as AAF’s Crop Diversification Centre North in Edmonton, Agriculture and Agri-Food Canada in Lacombe and Brandon, Syngenta in Manitoba, and Limagrain in Saskatoon, as well as collaborators in other countries.

Why feed and forage breeding?
In Canada, six-row barleys are grown for feed and/or forage. Many two-row barleys are malting varieties that are used for feed if the grain does not achieve malting quality, although some two-rows are feed varieties.

On an ongoing basis, FCDC adjusts the amount of resources available to its different breeding programs, including its six-row work, based on present and future demand and input from stakeholders. Some people challenge the need for FCDC to conduct breeding specifically targeted to feed/forage uses, and some people challenge the need for six-row breeding.

Regarding malting versus feed/forage breeding, Capettini says, “There is a perception that malting barleys are yielding at similar levels as feed barleys; that is why some people recommend not breeding specifically for feed, but as a side-product of the malting program. However, we believe we can have quicker progress and higher-yielding varieties if we breed specifically for feed/forage.”

He explains that, in any type of crop breeding, every trait you add in the selection process may delay the genetic progress of other traits. “For example, reaching the quality requirements for obtaining a malting barley could delay progress in yield improvement. That is the challenge faced in malting barley programs, where forage and feed are side-products. The result is that around the world, feed varieties normally have higher yields than malting ones. This feed/malting gap has been narrowed in Canada; however, it is easy to see that feed barleys like Amisk usually have higher yields than even the newest malting varieties.”

Similarly, some people argue that FCDC should stop breeding six-rows because they think two-rows have yields similar to six-rows. However, six-rows still tend to yield higher than two-rows under favourable growing conditions.

Furthermore, six-row feed/forage varieties are targeting an important niche market. FCDC believes that the significant acreage in Alberta and Canada planted to feed and forage crops merits having the centre’s relatively small breeding effort dedicated to six-rows. Along with higher yields, six-row feed and forage varieties are bred to have characteristics that make them more nutritious and palatable for livestock, like higher protein and higher starch digestibility in feed varieties, and smooth awns and higher fibre digestibility for forage varieties. 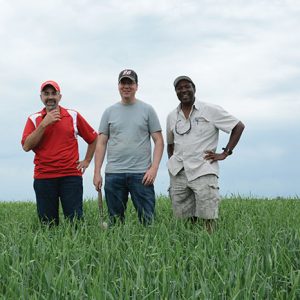 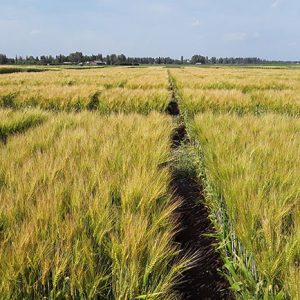 Nyachiro’s breeding work
“I find barley breeding very exciting when I look at the whole process starting from selecting the parents for making the cross. Watching the cross through many generations to the final winner that makes the variety for commercial production in the farmer’s field is very interesting,” says Joseph Nyachiro, the research scientist responsible for FCDC’s feed barley program.

“My best reward is when I meet a farmer who is happy with a barley variety we have developed from either the six-row or two-row breeding program. We need crop genetic diversity in both the two-row and six-row barley types. Diversity is a strength in a barley production system.”

Until recently, he focused on six-row breeding, but his current feed barley program now includes both six-rows and two-rows. Top priority traits include: high yield potential for grain and forage, strong straw and good lodging resistance, early maturity and resistance to multiple diseases, such as scald, blotches, smuts, FHB, stripe rust and stem rust. Smooth awns are a plus for the dual-purpose feed and forage lines.

Over the past five years, Nyachiro’s six-row program has been very prolific, releasing four high-performing varieties that have been taken up by seed companies for marketing and commercialization. He summarizes the key features of those four varieties:

Amisk, which is marketed by SeCan, is a dual-purpose feed and forage variety. “It is a semi-smooth awned, semi-dwarf barley with strong straw. It has better lodging resistance than Vivar and AC Ranger. Amisk has a high percentage of plump seed – 14 per cent higher than Vivar and 16 per cent higher than AC Ranger and even two-row types such as CDC Mayfair and Celebration. It has a better than average combination of disease resistance to stem rust, Septoria and spot-form net blotch.”

Nyachiro has several promising six-row lines in his breeding pipeline. “We have a number of advanced lines entering into their second-year testing in the Western Six-Row Barley Cooperative Test in 2020. These lines are SR19542 and SR19543 with Sundre parentage/pedigree background, and SR19546 and SR19547 with Vivar parentage/pedigree background. We will see how the four lines perform in the 2020 testing before we decide which ones to move forward for registration in 2021.”

Kabeta’s breeding work
FCDC’s current forage barley breeding program, led by research scientist Yadeta Kabeta, involves six-rows and two-rows. “We are developing varieties with overall improved forage quality, which includes better fibre digestibility. Within that objective, we are incorporating genes [into our breeding lines] that can decrease the amount of lignin in barley to increase the forage quality for ruminants.”

A key focus of his breeding work in recent years has been improving physiological traits like nitrogen-use efficiency (NUE). “Barley varieties with enhanced nitrogen-use efficiency require less nitrogen application. Reduced fertilizer input costs would make our Canadian barley more competitive in the global marketplace. These efficient varieties also protect yields when nitrogen inputs are limited. As well, these varieties have an environmental benefit because, with less nitrogen applied, there will be a lower risk of nitrogen losses to the environment,” Kabeta explains.

Breeding for increased NUE has been challenging. He notes, “We were probably one of the first organizations to start breeding crops for improved nitrogen-use efficiency, but now many other programs are launching NUE research in different crops. With many people working on this trait, the scientific information develops faster and we can make better progress.”

Kabeta started his NUE work with six-row barley, but he has since crossed the NUE six-row germplasm with two-row germplasm and is developing two-row varieties with improved NUE.

He emphasizes, “The nitrogen-use efficiency varieties that we develop are very good agronomically and have all the favourable traits that an enhanced variety would have, with the addition of NUE.”

His latest six-row release is a good example of that. “We have a new six-row line called SR18524 with the nitrogen-use efficiency trait. This line was supported for registration this year and we are looking for a company to commercialize it. It showed six to 10 per cent higher nitrogen efficiency than the standard check varieties,” Kabeta says.

“SR18524 is a semi-dwarf type with good lodging resistance. It is a smooth awned line with three to seven per cent higher grain and forage yields over the currently available six-row semi-dwarf varieties.”

Kabeta also evaluates six-row and two-row lines for water-use efficiency. “The idea is to develop resilient varieties that are tolerant to both low nitrogen and low moisture regimes. I believe that concomitant improvement in nitrogen- and water-use efficiencies may stabilize yield and bring about greater profitability for farmers.”

Nyachiro’s and Kabeta’s six-row barley breeding activities are providing Albertans and other Canadians with feed and forage varieties that combine excellent agronomic performance with great traits for livestock uses.

Capettini concludes, “Superior varieties are the foundation of agriculture. Breeders have been working on improving crop traits for more than 10,000 years. Breeding is even more relevant now, with the highly competitive international markets for crops and with the unprecedented global challenge of feeding 9 billion people by 2050, while dealing with the impacts of serious climatic pressures. Having superior crop varieties will help Canadian crop growers continue to contribute to a stable, secure and successful agriculture and food industry in our country.”