April 25, 2022
By Agriculture and Agri-Food Canada

Most outsiders believe that potatoes are the cream of the crop on Prince Edward Island. While that remains true in terms of acreage, cereal crops like wheat and barley are gaining popularity with farmers across the Island.

Agriculture and Agri-Food Canada (AAFC) biologist Dan MacEachern and his team help support the development of new wheat and barley crops that grow best in Atlantic Canada. They, along with AAFC barley breeder Raja Khanal in Ottawa, are the only known group creating locally adapted varieties for the Atlantic region.

The unpredictability of Atlantic Canadian weather, as well as unique pests and diseases, means that cereal crops need to be tailor-made for local fields. What works in Western Canada doesn’t necessarily translate to success in the Atlantic provinces. Additionally, changing weather patterns are creating the need for new, more resilient breeds.

“Breeding is one science that takes into account climate change – consistently evaluating how varieties are performing in current climate and then making adjustments.” 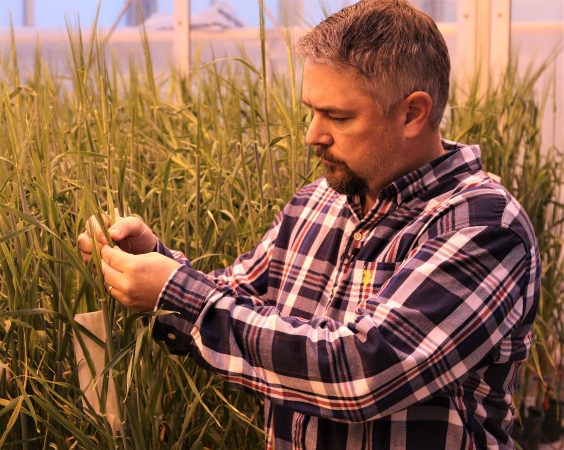 MacEachern’s team provides valuable input for two crops – spring wheat and spring barley – to the AAFC breeders in Ottawa, including which varieties are performing best in fields at the AAFC Harrington Research Farm in P.E.I. They also help evaluate how spring wheat, winter wheat, spring barley, oats, corn and soybeans grow in the Atlantic Canadian climate and then help develop new management strategies for farmers in partnership with organizations like the Atlantic Grains Council.

A typical season for the cereal breeding program involves harvesting in the fall, processing the crop, and putting together data, such as yield, disease and weed pressure for breeders. The breeder then works with MacEachern to select the highest performing varieties that will move forward to the next growing season. The process is year-round since growing and evaluation also take place in the AAFC Harrington greenhouse during winter months. Like potato breeding, it typically takes about ten years for a new cereal breed to come to fruition. Recently, the program released three new barley varieties – AAC Ling, AAC Bell, and AAC Madawaska.

A new barley variety with a lasting legacy

As a farmer and farm leader, Allan Ling, who passed away in 2018, was a tireless supporter of AAFC agricultural research and its role in the industry’s development. So it’s fitting that a standout new barley variety, AAC Ling, at the AAFC Harrington Research Farm now carries his name. 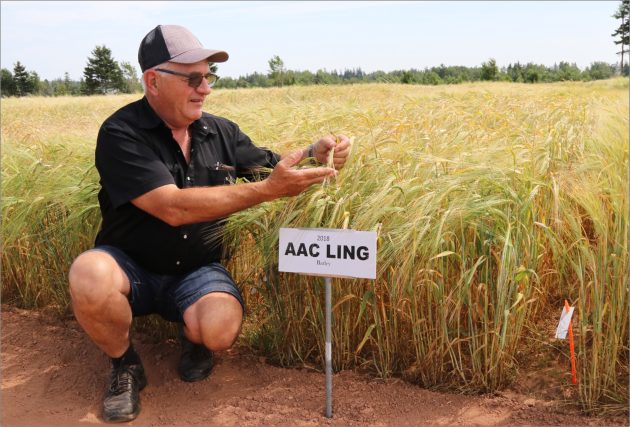 AAC Ling is a high-yielding variety with superior disease resistance that can stand up to the severe weather common in Atlantic Canada. AAC Ling was also evaluated by a large maltster in Quebec and should have some success as a malt barley for the craft malting industry. The variety was developed by Khanal using cross selections from Harrington.

Ontario-based seed supplier, SeCan, has the selling rights to AAC Ling. SeCan retailers across Quebec and the Maritimes, including McCardle Bros. in Kinkora, P.E.I., are growing and selling AAC Ling seeds directly to farmers. Currently, there are approximately 100 tonnes of AAC Ling certified seed available to Canadian farmers.

“AAC Ling is a great legacy for Allan, who founded the Atlantic Grains Council. I think this variety is going to be one of the great barley varieties on P.E.I., better in performance than the current top varieties, Island and Leader.”

Ling’s brother Melvin Ling, who has operated Lingdale Farms since 1975, grew AAC Ling in his fields for the first time this past summer. Those fields happened to be next to Ling’s old house.

“Allan was very proud of the research done by AAFC in Harrington, and he and I were both proud for AAC Ling to be named after him,” Melvin said. “I’m quite happy with how this new barley performed at my farm this past season. It outperformed all my other barley varieties.”

Melvin and other P.E.I. farmers are quickly taking notice of this new AAC Ling variety. It’s likely to continue its rise to prominence in Atlantic Canada and farmers will benefit from a high-yielding, quality barley crop – truly a fitting way to honour Ling’s legacy.