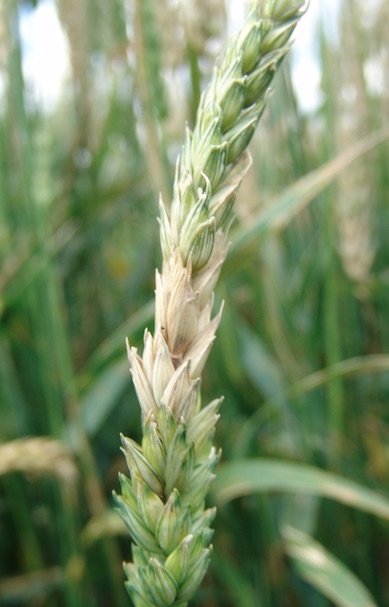 Fusarium head blight symptoms on wheat. Breeders in Western Canada have a lot of challenges with FHB

Fusarium graminearum is the main pathogen that’s found in Eastern Canada, Manitoba, and southeastern Saskatchewan. In terms of the mycotoxins it produces, it is primarily deoxynivalenol or “DON.” Fusarium culmorum is another species that also produces DON. It is more adapted to the cooler regions, so if it’s going to show up, we tend to see this one showing up in the cooler regions of Saskatchewan and Alberta.

Another pathogen, Fusarium avenaceum, is quite commonly found in Saskatchewan. It is not a DON producer, but can produce Fusarium damaged kernels (FDK). It produces a different form of mycotoxin, moniliformin, which is not currently regulated under any food or feed safety system. Fusarium poae is a nivalenol producer, which is a different type of toxin that is considered to be more toxic than DON.

It’s been 25 years since breeders in Western Canada have really had FHB on their radar and there have been a lot of challenges. One of our challenges is that the resistance that we have is controlled by many genes with fairly small effects. There are over a hundred quantitative loci (QTL) that have been identified for FHB resistance, and they were located on 20 out of 21 in the chromosomes in wheat.

The other challenge is that the resistance is not complete. What I call “phenotyping” is difficult. You need adult plants and there’s variation from plant to plant, so measuring actual levels of resistance is quite complex.

The most commonly used sources of resistance are the Sumai 3 and its derivatives. These are Chinese cultivars. The major gene of interest with this is the 3B gene that primarily controls Type II resistance. It also has some effect on DON accumulation as well. Another form of resistance is Frontana or the Brazilian types that are related to it. That’s mainly Type I resistance. There are other consistent QTL that we are finding within Canadian germplasm.

The first 15 years of breeding was primarily moving those genes into something that was well adapted. Since then, breeders are starting to combine multiple sources of resistance.

We mapped the major gene (FHB1) in Suami 3. In our greenhouse studies, we had less than 20 per cent spread of the disease within the spike, which is the strongest source of resistance that we have. Breeders are using this gene quite extensively. We know its location on the chromosome. We know markers around it that we can use to select for that particular resistance gene. Most breeding programs worldwide have some form of this resistance that they’re working with.

We also had mapped the Fusarium head blight 2 (FHB2) resistance gene. This source of resistance is not as strong as the FHB1 resistance gene and there’s still quite a large range of variability for disease severity and Fusarium damaged kernels.

Have we made progress? The answer is yes. In 2009, there were only 18 spring wheat varieties (excluding durum) that were at least intermediate or better. In 2017, we’re looking at 58 varieties. So things have improved. With winter wheats, we’ve made some progress and there are some choices with regard to more resistant materials. Emerson, a resistant line, was registered in 2011.

Now the challenge is for those of you who are in the amber durum area. We have made improvements in amber durum, but they’ve been very small. There are no really great sources of resistance for Fusarium in adapted germplasm. Breeders are working with related species to identify resistance genes and introgressing them into amber durums. They then have to do some additional breeding to remove deleterious effects that come with those genes. It doesn’t happen quickly and it’s a longer-term process.

Control strategies
First, choose the variety with the best resistance. Next, understand how the infection occurs so that you can monitor environmental conditions to help you decide if a fungicide is required.

The most susceptible stage for FHB infection for wheat is at the flowering stage. Certain environmental conditions are also favourable, including significant precipitation or humidity, and temperatures between 16 and 32 C with a nighttime temperature above 10 C.

It is possible to continue to get infections that occur even up to the soft dough stage. If you’re in a situation where there’s been some late-season infection, you might not have seen significant disease symptoms and yet the DON levels may be high.

Pay attention to the risk maps. Manitoba has had risk maps for a number of years and Saskatchewan has implemented them as well. In Manitoba, the forecasts are based on significant precipitation and higher temperatures for a period of seven days prior to anthesis. Farmers can look at these risk maps, know what stage their crop is at, and if they feel that they’re at a high risk for infection, the next step is to make some decisions in terms of fungicide or some other management activity.

It is also very important to realize that conditions can change quickly over even a fairly short period of time. These models are also regional in nature. If you’ve had heavy thunderstorms that might have not been over a larger area, you still need to do some assessment on your own farm to determine what your moisture conditions are.

With fungicides, one of the things that you need to consider is what that risk is going to be. If you have a crop that is moderately resistant and conditions are not good for Fusarium to develop, a fungicide application may not be necessary. If the conditions for Fusarium development are high, then you might want to consider applying fungicides.

Fungicides that are available are only suppressive and the timing of application is critical. The best results are going to be in combination with a more resistant variety.

The window for application is quite small. You’re trying to target the application as the head has emerged and before flowering. That’s going to be when the most effective application timing is and it may only last a few days.

A study that was done by a graduate student at the University of Manitoba in 2011 compared fungicide efficacy with four different fungicides and two different types of varieties. In her study, Glenn spring wheat, rated moderately resistant to intermediate, was compared to the susceptible Roblin variety. The fungicides included in the study were Prosaro, Proline, Folicur and Caramba.

In the study, there weren’t any significant differences between the fungicides in terms of reduction of FHB, FDK or DON. With the moderately resistant variety, control was quite high with very high reductions in FHB, FDK and DON levels. But with the susceptible variety, the level of efficacy wasn’t nearly as high.

First is ensuring seed quality. Gilbert et al (2003) found there is a difference between seedling blight and head blight, and having high levels of Fusarium-infected seed does not necessarily directly relate to FHB. Fusarium-infected seed will affect your seedling vigour, plant stem counts and crop uniformity. You want good quality seed because you want to get your crop up as quickly as possible and be as uniform as possible, so fungicide application timing and disease control is better.

With regard to crop rotation, the pathogen can survive on crop residues of corn and small-grain cereals such as wheat and barley. Avoid corn-wheat, wheat-wheat or barley-wheat rotations and rotate to a non-susceptible crop.

Residue management is also a consideration. There are studies that suggest burying FHB-infested crop through tillage or burning can reduce residues and in theory reduce the inoculum, but from a crop management standpoint, I don’t want to recommend that. I think chopping crop residues into smaller pieces so they degrade faster is achievable without affecting your soil health. Removing crop residues can provide some benefits, especially using chaff collectors to remove chaff.

However, studies have shown that even with all the management that you can do at your local level, good local practices don’t necessarily help. The ascospores can travel a long distance and infections may come from outside your local management area.

With regard to harvest management, the grading system is based on Fusarium-damaged kernels. Tolerances can be anywhere from 0.25 per cent to four per cent by weight, depending on the class and the grade. There are strategies that you can use to try to clean up those samples. One of them is increasing fan speed or shutter openings to allow more of those Fusarium-damaged kernels to go out the back of the combine. Some organizations are providing grain sorting and cleaning services. Also, Fusarium doesn’t develop uniformly in the field. There may be areas that are heavily lodged with more Fusarium, which you could consider harvesting separately.

The other thing is to make sure the grain dries down fairly quickly. If the pathogen is there and moisture conditions are high enough to keep that pathogen active, it can continue to accumulate mycotoxins even when you’re not seeing changes in symptoms.

In summary, FHB management is complex. I think this is one of those situations where you really need to use all the tools in the toolbox. It really does involve having to manage a whole bunch of things together, and combined, they can make a difference. Individually, I don’t think there’s as much impact as what you would like.

This article is a summary of the presentation “Advances in Breeding and Management of Fusarium Head Blight in Wheat,” delivered by Dr. Anita Brûlé-Babel, Department of Plant Sciences, University of Manitoba, at the Field Crop Disease Summit, Feb. 21-22, 2017. Click here to download the full presentation.

Don’t forget to subscribe to our email newsletters so you’re the first to know about current research in crop management.