Devin Toews of Toews Family Enterprises at MacGregor, Man., won the DuPont Pioneer Yield Challenge Contest in 2015 with a bin-busting 200.8 bushels per acre.

So what does it take to grow a 200-bushel corn crop on the Prairies? “You can do so many things when it comes to growing the crop, but there is some luck in it, too,” Toews says.

The 1.24-acre plot picked for the yield contest was measured and weighed with a weigh wagon to confirm the yield. Toews had close company, with Don Toews at Winkler recording a 193.8 bushel corn yield and Everett Boyd at Boissevain growing a 186.9 bushel crop.

Toews says typical corn yield in the MacGregor area is 120 to 130 bushels per acre, on average, although depending on the year, yields can be higher. “Last year [2014], corn yields weren’t that good, but 2015 was a pretty good year,” he says.

Toews uses a strip tillage program to minimize tillage of stubble and apply fertilizer. He then seeds back into the fertilizer-banded strip till with a Case IH 1250 planter on 30 inch row spacing. The planter has a liquid system that is used to put on an Alpine liquid phosphate (P) starter fertilizer that is dribbled with the seed.

“As the plant develops it grows into the band and can use as much fertilizer as it needs,” Toews explains.

Toews has been using precision agriculture in decision-making, and uses it to assess varieties side by side. The planter has two tanks that can plant two varieties at a time.

“We see trends with varieties in wet or dry conditions. We analyze the yield maps and have chosen varieties that work best in our soils and conditions. This particular variety, 39D97, has done really well for several years,” Toews notes. “Along with variable rate strip-till fertilizer we try to tune for the top potential of the crop. Another thing we find value in is on-farm trials. For the past few years we’ve been looking for things that can pay off. We want to make sure everything we do makes sense, from starter fertilizer to strip-till; it has been trials that help make those decisions.”

Toews sprays weeds as needed. Depending on the year, two to three applications of glyphosate are applied.

Information from Environment Canada shows the MacGregor area received 350 to 400 mm of precipitation between May 1 and Oct. 12, 2015. The area had approximately 2900 corn heat units in 2015.

“We had ideal timely rains which was about perfect for growing corn this year, other than a big snow storm on the May long weekend which set the crop back quite a bit, but it recovered better than we thought possible,” Toews says. 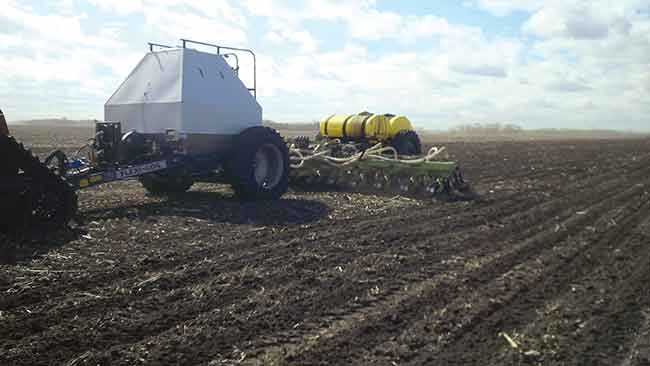