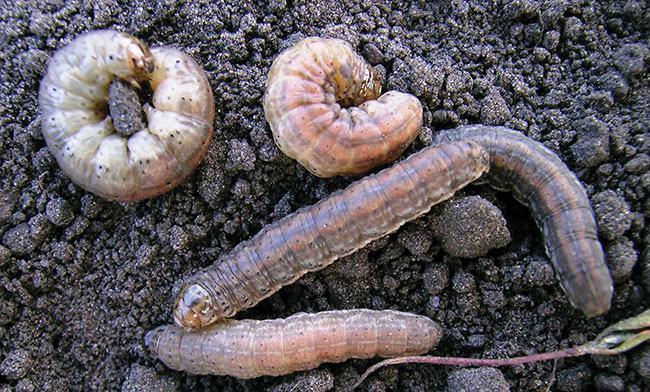 Redbacked cutworms overwinter in the egg stage, so damage may not show up until later in the spring. Photo courtesy of John Gavloski.

Canola seed purchasing decisions are typically made before the end of the year to ensure the availability of preferred hybrids and varieties. This means growers need to think about what type of early season pests they expect to be a problem, and whether foundation seed treatments will be adequate or enhanced options would be recommended.

For canola growers, flea beetles and cutworms are the two most economically damaging early season pests, both which can cause significant crop damage if not controlled. Commercial canola seed comes pre-treated with insecticide for controlling flea beetles, in combination with fungicides for controlling seedborne and seedling diseases. Additional insecticide components for cutworm management and enhanced flea beetle control can be added if desired. Proper seed treatment sets up the crop for good stand establishment, uniform crop development and optimizing yield potential.

“Flea beetles are a chronic and potentially serious pest issue for canola growers, and canola seed is sold treated with an insecticide for early flea beetle control,” says John Gavloski, entomologist with Manitoba Agriculture. “Last year, the flea beetle situation was quite high in many areas, so along with seed treatments, some additional foliar insecticide applications and reseeding were required. One of the big challenges with flea beetles is getting the crop through the susceptible stages before the seed treatment wears out. If spring growing conditions are good and provide quick germination and quick early growth, then a seed treatment may be all that is needed. But if conditions are not as good and populations are very high, an additional foliar insecticide application may be required. Soil moisture is also an important factor, which can vary from year to year. In dry years, growers may want to seed deeper to moisture, which may delay germination and early growth as well.”

There are two main flea beetle species that can cause serious damage in canola crops in Western Canada: crucifer (Phyllotreta cruciferae) and striped (P. striolata). The crucifer flea beetle is abundant across all canola-growing regions, while the striped flea beetle has been expanding its range into the Black and Dark Brown soils zones. Adults overwinter and emerge early in the spring and cause damage to canola by feeding on stems, cotyledons, and young true leaves. Adult crucifer flea beetles are small, black, elliptical or oval-shaped, and less than 2.5 millimetres (mm) long. The striped flea beetles are two to three mm long, oval-shaped with two cream-coloured or yellow wavy stripes on their backs.

“Although the dominant species [in many areas of the Prairies] has typically been the crucifer flea beetle, the striped flea beetle, which had a traditional range mostly in northern areas, has been moving south throughout the Prairies,” explains Gregory Sekulic, agronomy specialist with the Canola Council of Canada. “Now it is difficult to find fields without striped flea beetles. There are some biological differences in the two species and they are managed somewhat differently. The striped flea beetles tend to emerge a little earlier in the spring and eat a little more before they are controlled by some older-generation neonicotinoid products. Although there has been lots of research dedicated to flea beetles, it remains extremely difficult to predict whether or not flea beetle populations will exceed economic thresholds or what regions could be at risk the following year. Therefore, most canola seed comes treated with a base treatment for flea beetles, and some newer, advanced products are capable of stronger management of striped flea beetles.”

Cutworms are another serious canola pest and some areas of Manitoba, for example, have seen high populations in recent years, including 2019. Newly germinated seedlings and small plants are most at risk, as cutworms can cut off and kill the entire plant. Cutworms tend to be most active later into the evening, when conditions are cooler and relative humidity is higher. One of the challenges in scouting cutworms is different species have different feeding habits, including aboveground, soil surface and belowground feeders. The prominent species that attack crops on the Canadian Prairies include army cutworm, pale western cutworm and redbacked cutworm.

“Thresholds for cutworms tend to be a little more difficult to trigger, as typically cutworms tend to be patchy and do severe damage in some areas, but not others,” Sekulic explains. “Cutworms are a very difficult pest both to scout for and control, and substantial portions of crop can be lost before damage is widespread in the spring. New-generation seed treatments or top-ups do a good job of managing them before a foliar treatment would be required.”

Cutworm moths like to lay eggs in bare areas of a field that have been dried out or drowned out, Sekulic continues. “In those higher-risk fields, growers may want to consider a top-up seed treatment for cutworm management the following year, along with addressing striped flea beetle populations.”

Gavloski adds most canola seed comes with a base seed treatment of the neonicotinoid group, which is just registered for flea beetles. “Adding an additional insecticide component, such as those in Group 28, to the base seed treatment is needed for good activity on cutworms.”

There is a tradeoff, he notes: “An enhanced package that addresses both flea beetles and cutworms will cost more than a base treatment for flea beetles only. But, if the seed treatment saves a foliar spray down the road, or there is lots of cutworm damage, then the enhanced care will pay for itself.”

There is a tradeoff, he notes: “An enhanced package that addresses both flea beetles and cutworms will cost more than a base treatment for flea beetles only. But, if the seed treatment saves a foliar spray down the road, or there is lots of cutworm damage, then the enhanced care will pay for itself.”

Cutworms can be challenging, Gavloski adds. If, for example, the dominant species is redbacked cutworm, which overwinters in the egg stage, the hatch may have just begun at seeding and damage may not show up until later in May, impacting yield and profitability if not controlled. “The difficulty is the decision will have to be made the previous fall regarding which commercial seed package to purchase. So farmers will have to make decisions for controlling cutworms based on what they saw last year.”

For 2020, canola growers will have a new enhanced commercial seed treatment available for protecting against both striped and crucifer flea beetles, as well as cutworms. “Feeding by flea beetles and cutworms can result in uneven emergence, thin plant stands, delayed crop development, and uneven maturity, leading to lower yield potential. Feeding sites can also act as entry points for disease-causing pathogens, further threatening canola yields,” says Karen Ullman, seedcare product lead for Syngenta Canada. “We have tried to make seed treatments simpler for growers in 2020 by offering two key options, either a base treatment like Helix Vibrance, or the base plus an enhanced treatment in Fortenza Advanced.”

Fortenza Advanced, which combines two seed-applied insecticides in one product, sulfoxaflor (Group 4C) and cyantraniliprole (Group 28), will always be paired with a base seed treatment, such as Helix Vibrance. Ullman says the product offers protection from both striped and crucifer flea beetles, as well as cutworms, in addition to four fungicides for control of seedborne Alternaria, blackleg, and seedling disease complex caused by Pythium, Fusarium, and Rhizoctonia spp. 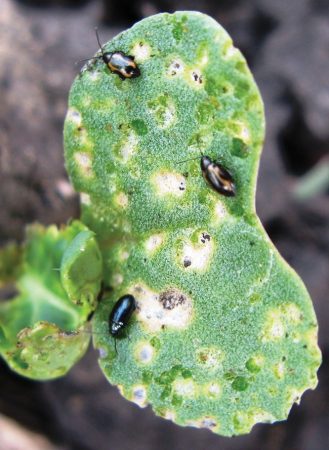 Flea beetles are a chronic and serious pest of canola. Photo courtesy of John Gavloski. 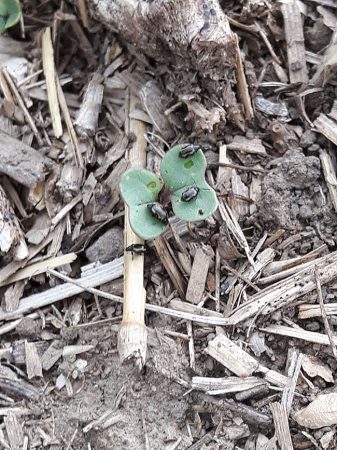 It’s difficult to predict the risk and impact flea beetles may have on a crop, so most canola seed comes treated with a base treatment, and new products are capable of stronger management. Photo courtesy of the Canola Council of Canada.

“Fortenza Advanced builds upon the foundation of a base treatment to protect canola seed from aggressive pests, in particular striped flea beetles that are continuing to move through the Western Prairies, and cutworms,” Ullman says. “Fortenza Advanced also extends the timeline of the seed treatment, from 28 days with a base seed treatment to an assurance policy of 35 days after planting with Fortenza Advanced. The only time growers may have to go in with an additional foliar application is if there is a really high pressure from pests.”

“Flea beetles and cutworms were a problem for many growers in our area in Alberta in 2019, so selecting enhanced seed treatment packages when purchasing canola seed this fall should be considered,” adds Debbie Michielsen, owner of Meadowland Ag Chem Ltd. in Castor, Alta. “Some growers didn’t realize they had cutworms, or thought the problem was gophers or drought patches before realizing the damage. Protecting that small seed going into the ground, improving seedling vigour and making sure it is protected against flea beetles and cutworms is important. We generally sell most of our canola seed by the end of November, so growers have to decide early if they want the base or advanced seed treatment packages.”

Michielsen adds growers sometimes forget how frustrated they were with early season pest infestations, and reminds them it is important to remember that canola seed is not cheap and seed treatment is like insurance. “Sometimes they made good decisions but never went back to scout fields and verify the results, so they don’t realize the benefits they gained.”

Michielsen notes seed treatments provide early protection specifically for the target, meaning a foliar spray may not be necessary. “Waiting for foliar applications means you likely already have damage,” she says, noting the time and financial costs of another field operation, rather than addressing the problem at the seed treatment stage.

“Whether growers are working with an independent agronomist or a retailer, check in with [your advisor] to find out what they are seeing in fields in your area. They can also help guide which seed treatments might be recommended depending on pest populations, moisture and other conditions,” Ullman adds.

“Place canola seed orders early, particularly for the enhanced products, to make sure of availability. By adding enhanced seed treatment you are protecting your seed investment early and contributing to your success. This gives the canola crop the greatest chance to have good stand establishment, uniform crop and really giving yourself the best yield potential for the coming year.”