Produce what you need On Farm 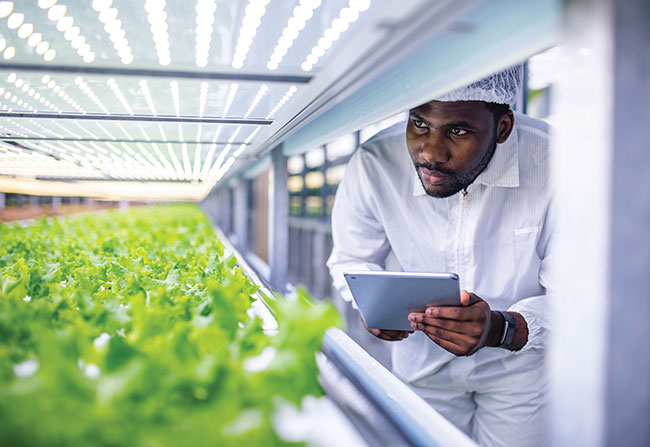 There can’t be a farmer on earth who isn’t aware of the ammonia supply chain problems plaguing the world and the resulting fertilizer shortages and price spikes that are threatening crop production and food security.

The bottom line is that there is no better, more efficient way to deliver nitrogen to soil than in ammonia. But there is a better way to produce it. Switching to Green Ammonia, produced on farm by the farmers who will use it, eliminates the failing supply chain, price uncertainty and the carbon emissions previously associated with ammonia production.

Green Ammonia, produced on farm, is the future of farming. The global fertilizer crisis will no longer threaten food security, as farmers will be able to apply nitrogen fertilizer in the right amount, at the right time, in the most sustainable way, at a stable price, year after year, decade after decade. And the carbon footprint of farming will be significantly reduced.

While the primary application on farms is fertilizer, Green Ammonia can also be used as a fuel for grain drying and to power other farm machinery, including generators for creating electricity. That would allow farmers to free themselves of using any fossil fuels on their farms. With Green Ammonia produced at home, the need for diesel and propane can ultimately be eliminated as well.

The FuelPositive System
FuelPositive is commercializing a Canadian-invented technology that manufactures carbon-free, Green Ammonia from air, water and sustainable electricity such as solar, wind or hydro energy. No fossil fuels are used; that’s what makes it green. It requires much lower pressure and temperature than traditional production methods, while operating on different energy loads, which makes it economical and versatile. And unlike traditional methods, the FuelPositive production system can be easily turned on and off, to respond to fluctuating energy availability. 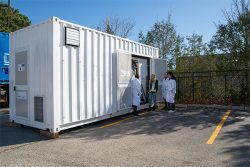 FuelPositive’s system includes a nitrogen generator to produce nitrogen from air, a water electrolyzer to produce hydrogen from water, and a novel, patent-pending ammonia synthesis converter to produce ammonia from the hydrogen and nitrogen. The output is Green Anhydrous Ammonia, which is used by many farmers in Canada and around the globe. The company plans to introduce a Green Aqueous Ammonia module soon.

The onsite model eliminates farmers’ historical reliance on the supply that has begun to fail them in recent years. The containerized Green Ammonia production systems are built to fit within standard 20-foot shipping containers, allowing them to be easily shipped to the location where the green ammonia is used. The initial systems fit into three 20-foot containers and produce 300 kilograms (500 litres) of Green Ammonia per day or 100 tonnes per year – enough for a 2,000-acre farm. The modular and scalable design can be scaled up, depending on the farmer’s requirements. The Green Ammonia is stored on the farm in standard ammonia storage tanks and used as needed.

The first demonstration system will be operating in a pilot project throughout 2023 on an 11,000-acre crop farm near Sperling, Manitoba, using the clean electrical grid available in that province. Other farmers may need to work with FuelPositive to set up renewables to run their systems. FuelPositive is aiming to sell its systems to farms that predominantly raise crops for human consumption, not animal, since livestock farming contributes heavily to emissions and climate change.

Each FuelPositive system is expected to have a lifespan of 30 to 40 years, with upgrading of the catalyst at the 15-year mark. Otherwise, maintenance costs will be minimal. FuelPositive will monitor it, optimize it and maintain it remotely, and use its machine learning and AI software to keep things running smoothly. The long product life is critical as farmers seek control over costs and supply. The system technology will be continually advancing. And due to its modular design and remote connectivity, each customer will be able to take advantage of new technologies and upgrades as they become available.

Additionally, the FuelPositive team is conducting research with its agriculture advisors to identify the most effective practices to reduce nitrous oxide emissions associated with nitrogen fertilizers.

It is also exploring the role its Green Ammonia production systems can play in Controlled Environment Agriculture as more farmers enter that sector as a way of avoiding the complications of weather and climate change. Pilot project partners are being sought to work with FuelPositive’s systems to provide carbon-free nitrogen fertilizer, as well as for fossil fuel replacement, dehumidification, water and system purification, sanitizing, and heating and cooling, as Green Ammonia is an incredibly versatile chemical with so many uses.