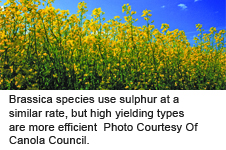 On the Canadian prairies, there are about 11 million acres of agricultural land under Brassica type oilseed crop production. The majority is Brassica napus (Argentine type), with a small acreage of Brassica rapa (Polish type) also grown. But with the frenzied interest in biodiesel production, growers in more areas of the prairies are looking to cash in on oilseed production.
One potential crop, because of better drought tolerance, is Brassica juncea, or juncea canola, which was derived from a cross with juncea mustard. The resultant cross has been classified as a non-GMO novel food because it has canola quality standards.

Agriculture and Agri-Food researcher, Dr. S. S. Malhi set out field experiments to determine yield, seed quality and S uptake responses of different Brassica species/cultivars to S deficiency and S fertilization on a S deficient soil in northeastern Saskatchewan. Along the way, he was also able to compare the responses to other Brassica oilseed crops. In addition, given the great genetic diversity of glucosinolates in the seed of Brassica juncea, which is associated with S uptake, it is extremely important to determine if the low glucosinolate concentration in juncea canola seeds can be retained under different S management conditions.

A total of 20 treatments were tested in a combination of four oilseed crops and five rates of potassium sulfate fertilizer with a zero S check and nine, 18, 27, and 36 pounds S per acre. Over the three years of the trials, the varieties tested included the B. juncea canola variety Arid, B. juncea canola Amulet, B. juncea mustard Cutlass and B. napus InVigor 2663 hybrid canola.

“All Brassica species/cultivars responded positively for seed yield and most other parameters to S fertilizer in all three years, but the magnitude of response varied,” says Malhi.

In 2003, drought during the late growing season near flowering and pod formation caused a substantial reduction in seed yield. Seed yield was highest with Cutlass mustard in the dry year of 2003 and with InVigor 2663 hybrid canola in the wetter years of 2004 and 2005.

Sulphur uptake in seed was highest with Cutlass mustard in all years. The effects of S deficiency and applied S were more pronounced on seed than straw. Seed yield response trends to applied S were fairly similar for the four Brassica species/cultivars, and seed yield was usually maximized at about 30 pounds S per acre rate for all species/cultivars.

“The findings suggest that S fertilizer application rates for optimum seed yield should be similar for the Brassica species/cultivars used in this study on S-deficient soil, but higher yielding types would produce greater seed yield by using S more efficiently,” explains Malhi. 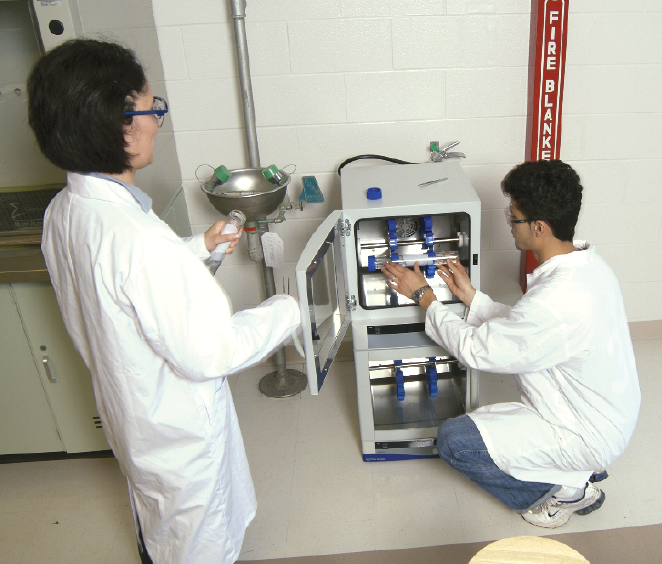 Ensure nutrients are balanced
Malhi’s findings mesh with research conducted by Westco Fertilizers from 1999 to 2004. In that study, researcher Rigas Karamanos of Westco, in Calgary, found that higher yielding hybrid canola used nutrients more efficiently compared to conventional canola varieties.
“One striking difference that we saw was that the
maximum yield for hybrid canola was obtained with an additional 40 pounds of applied fertilizer N, but also with only an additional 30 pounds of soil and applied fertilizer N per acre. This would suggest that hybrids utilize soil N more efficiently and is in line with previous observations that hybrids are more efficient scavengers of soil nutrients,” explains Karamanos.

Looking at the S yield curves from Malhi’s work, the response curves were fairly similar for all oilseed species/cultivars, suggesting that a similar S fertility program can be applied to all of these crops. However, under optimal S fertility, higher yielding oilseeds will produce higher yields by using S (and presumably N) more efficiently.

Karamanos also cautions that both soil N and S must be accounted for when determining fertilizer rates, rather than just using a specific N:S ratio in the fertilizer blend. Any inference of an optimum N:S ratio of either applied or soil plus applied N and S is rather difficult, as it will heavily depend on the soil N and S levels.

Based on the Westco research, optimum yields of canola are derived so long as individual N, P and S requirements are fulfilled. Most S deficiencies seem to be corrected with approximately 20 pounds S per acre, although more severe S deficiencies may require levels of S application closer to 30 to 35 pounds S per acre, as was the case at Star City with Malhi’s research, where the optimal S rate was about 30 pounds per acre.

Spatial variability of S may also necessitate a blanket application of 10 pounds S per acre even on soils that test sufficient in S. Once a N and/or S deficiency is corrected, there appears to be little need for balancing N and S application rates at any particular ratio, especially with higher yielding canola hybrids.