Ontario producers planted 2.2 million acres of corn this spring, up by more than 200,000 acres over each of the past three years. The huge acreage places corn second only to soybeans in total planted area and often first in total farm value in Ontario. Though these statistics prove corn is key to Ontario’s agriculture sector, producers are not yet capturing the crop’s per acre potential. Every corn grower should brush up on their pre-harvest and harvest-time best management practices in order to get the most from their crop. 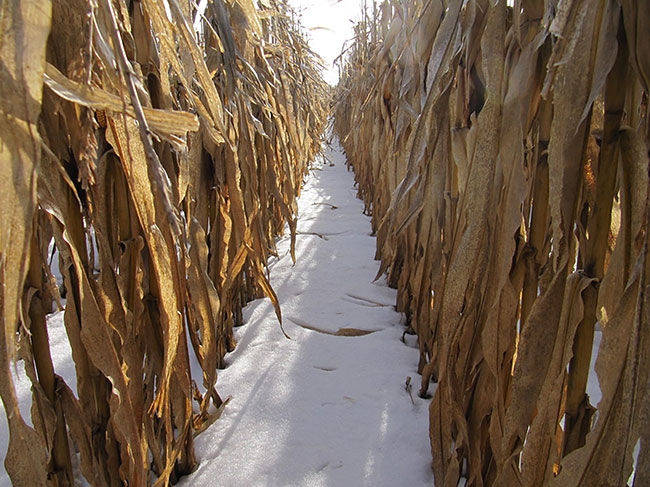 To have any chance for spring harvest There are certainly management opportunities in terms of harvesting a good quality corn crop.

“There are certainly management opportunities in terms of harvesting a good quality corn crop. It all comes down to managing crops strategically – something that many growers should take additional time to consider,” says David Hooker, a field crop agronomist at the University of Guelph.

As every corn producer knows, successful harvest depends on one’s corn crop maintaining strong standability until harvest. A critical factor to limit lodging is minimizing stalk rot. Currently, research on how much fungicides counter stalk rot is limited. However, some data suggests a fungicide application at tasseling can help.

Much of eastern Ontario’s corn was very delayed this year due to late planting and slow early season growth. Whereas corn planted in western parts of Ontario grew ahead of significant leaf disease development, leaf diseases were present early in the development of many eastern Ontario corn fields. As Hooker explains, applying fungicide to counter leaf disease can have the added benefit of increasing stalk strength.

While a timely fungicide application can help limit lodging, standability can vary greatly from hybrid to hybrid, given various growing conditions. As such, Hooker recommends all farmers employ an ultra-simple harvest best management practice: the push test. As corn nears physiological maturity, stand in the corn row and push plants over to an angle of about 30 degrees (a simple rule is to push plants the length of one’s arm) at chest height. If many of the stalks break, standability is likely to be a significant issue at harvest.

While producers can’t fix a standability issue so late in the season, Hooker says they can minimize losses by opting to harvest fields with weaker stalks sooner. “I don’t think many producers do push tests but there is certainly an opportunity to capture additional value by strategically determining which fields to harvest first.”

Disease is likely to be a more significant issue than normal, given high moisture levels throughout the season in eastern Ontario. Most producers are rightfully concerned about Gibberella ear rot, which causes significant crop devaluing due to the mycotoxin it produces. Last year, a number of Ontario growers ran into issues trying to market grain contaminated with significant levels of mycotoxin, leaving them with much greater difficulty selling their product and, ultimately, far lower returns.

As western bean cutworm continues to move east across Ontario, expect increasing challenges from the virulent ear rot pathogen, since the cutworms’ burrowing creates avenues in which fungal organisms can flourish. The best line of defence is to scout carefully for western bean cutworm via pheromone traps and spray for cutworm and Gibberella when necessary at tasseling and silking.

Because the highest levels of mycotoxins are typically held in the kernels at the tips of cobs, combines that are set to capture a lot of cob or undeveloped kernels will tend to harvest much poorer samples. Producers harvesting in Giberrella-prone fields should set their combine blades to a concave shape so the small kernels on the tip of ears are left on the cob and dropped behind the combine.

“The first sightings of western bean cutworm in Ontario were in 2009 and 2010. Now it’s become a major pest in the southwest and it’s moving east. It’s just a matter of time,” Hooker says. “Producers should be reminded that combine settings are a relatively simple way to minimize losses in a field where vomitoxins are suspected.”

To further minimize mycotoxin levels in harvested grain, set the fan speed to blow as many small, late kernels as possible out the back. Ideally, screen or clean the grain to minimize small and cracked kernels. In addition to reducing mycotoxin levels, a thorough screening will speed drying time and improve storage efficiency by maximizing aeration.

Expect increased stalk rot and ear moulds across eastern Ontario in fields that have been stressed by excess moisture or, less commonly, by other pressures this season. In fields where rot and mould is an issue, growers should harvest as early as possible and plan to cool grain quickly following harvest.

Crops damaged by birds should have outside rows harvested, handled and stored separately to minimize contamination.

A cool, wet spring delayed many producers’ planting plans this year. The continuing cool weather across much of eastern Ontario means many corn fields are significantly behind an ideal schedule. So long as fall is relatively warm and open, harvest should be achievable for most producers. However, if the crop does not reach physiological maturity before the first fall frost, growers may face severe yield reductions and quality concerns.

Every year, at least some growers are tempted to let their corn overwinter in order to allow it to dry. But be warned: Hooker says that although this management strategy does decrease costs, its negative consequences outweigh any gain.

“We’ve done some projects looking at leaving corn on purpose over winter. What we saw was severe lodging, to the extent that the losses were so high they negated any savings from drying charges,” he says. “No grower plants corn saying, ‘I’m going to harvest it in the spring.’ Leaving it is always a consequence of the weather. If you’re into November and your grain moisture is still at 35, the chance of it coming down is very low because of the cold and humidity. My recommendation is to not leave a crop out over winter unless absolutely necessary.”

To have any chance for spring harvest, a corn crop must have excellent stalk strength and crop standability in the fall.

Finally, one last best management practice: cross your fingers for a warm, open fall. After all, Mother Nature ultimately retains the majority of control over every stage of the growing season.

Quick Tips for issues at harvest
Stalk strength
Applying fungicide to counter leaf disease can have the added benefit of increasing stalk strength.
Conduct the “push test” later in the season. If there is a standability issue, harvest fields sooner.

Minimizing mycotoxin
Producers should set combine blades to a concave shape so small kernels on tips of the ears are left on the cob and dropped behind the combine. Set fan speed to blow as many small, late kernels as possible out of the back. Screen or clean grain to minimize small and cracked kernels.

Bird damage
Have outside rows harvested, handled and stored separately to minimize contamination.

Overwintering
Although this can decrease costs, research shows the negative consequences can outweigh any gain.