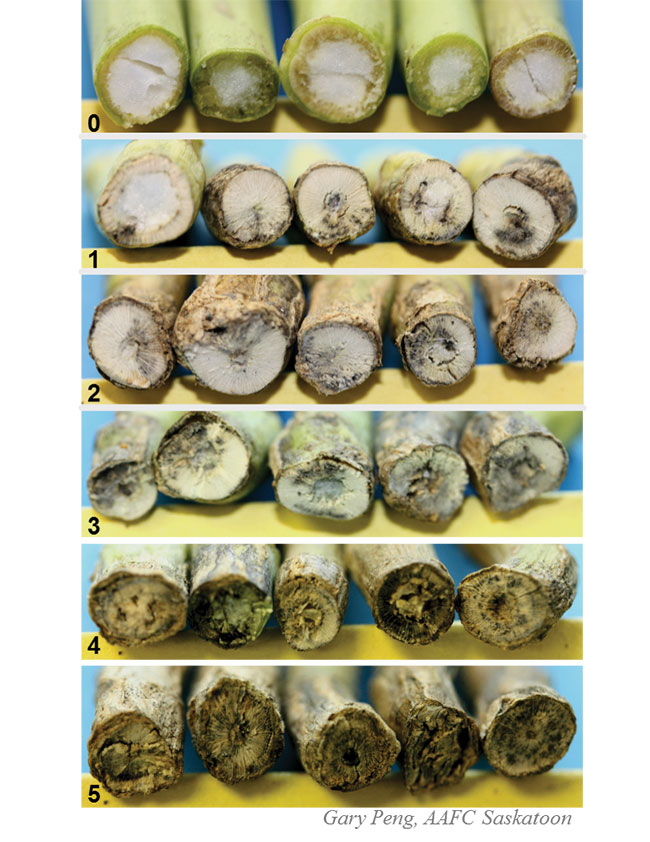 Research co-led by Sheau-Fang Hwang and Steve Strelkov at the University of Alberta is further refining the blackleg yield loss model so that agronomists and farmers can more objectively evaluate the performance of their resistant canola hybrids. They had previously investigated the blackleg severity-yield loss relations on the open-pollinated and blackleg susceptible Westar canola. In that research Hwang and Strelkov found a strong negative relationship between blackleg severity and yield; every one-unit increase in disease severity rating on a scale of one to five resulted in a yield loss of 17.2 per cent.

Blackleg, caused by Leptosphaeria maculans, is managed mainly through the use of resistant or moderately resistant canola hybrids. However, the relationship between disease severity and yield had not been examined in hybrid canola with blackleg resistance. The objective of their new study was to establish the relationship between blackleg severity and the yield of moderately resistant canola hybrids in Western Canada.

Field experiments were conducted over two years at two sites located at the Crop Diversification Centre North, Alberta Agriculture and Forestry in Edmonton. Two canola hybrids, 1950RR and 73-15RR, rated as moderately resistant to blackleg, were used in the experiments.

Inoculum of L. maculans was cultured and used to inoculate the field plots. At one site, the grain inoculum was applied at seeding by placing it in a push seeder along with the seeds. At the other site, the plots were hand-seeded at a rate of 25 seeds per row together with the inoculum. At harvest, the plants were clipped at the soil line, and the stem cross-sections were examined visually for blackened tissue.

Blackleg severity was rated on a zero-to-five scale, where zero represents no disease and five is plant death. A visual representation of this scale was developed by AAFC researcher Gary Peng in Saskatoon, and can be found on the Canola Council of Canada’s blackleg.ca website. It shows the rating scale with cross-section photos of diseased canola stems. It’s a great tool for assessing the severity of blackleg disease and whether new races of L. maculans in the field are overcoming the resistance genes.

The average blackleg severity rating was approximately two on each canola hybrid that Hwang and Strelkov assessed, consistent with their classification as moderately resistant to this disease. Regression analysis was used to establish the relationship between blackleg severity and both pod number and seed yield.

This research is important because a shift in the L. maculans pathogen population has been identified. In research at AAFC Melfort in 2007, the percentage of Av2 and Av6 genes was very high in the pathogen population. Research in 2010 and 2011 at the University of Manitoba found the presence of the Av3 and Av9 genes had decreased quite a bit, but the Av7 gene had increased.

Currently, the predominant resistance gene found in around 70 per cent of the varieties/breeding lines is Rlm3, which corresponds to resistance to the Av3 pathogen. This shift in pathogen genes means the Rlm3 gene, first introduced in the early 1990s, would be less likely to be effective across the Prairies.

And this is where scouting for blackleg incidence and severity comes in. If disease severity is increasing to around two (12 to 15 per cent yield loss in Hwang and Strelkov’s research) and the disease is spread across the field, there may be a shift in pathogen type, and the genetic resistance in the canola isn’t providing protection against the new pathotypes. In this case, rotating to a new resistance gene would be beneficial.

However, if growers have a diverse rotation with a three-year break from canola, and are not seeing blackleg becoming progressively worse, there would be no need to rotate genes, because you might actually be rotating to a resistance gene that isn’t as good as the one currently deployed.

The results of Hwang and Strelkov’s research provide a scientific basis for the necessity of rotating resistance genes. Understanding the yield loss relationship with blackleg severity helps agronomists and growers more accurately evaluate the performance of their blackleg-resistant hybrids, and assess the economic losses they may be incurring from a shift in the blackleg races in their field.