For Canadian canola growers, root-eating maggots are a notoriously difficult to manage problem. Existing seed treatments are ineffective; insecticides are impractical given the long window during which adult flies lay their eggs; and cultural practices that might slow the maggots are unpopular as they also decrease crop yield.

Due at least in part to increasingly tight canola rotations, root maggot numbers have risen sharply over the past 30 years, and the pest now holds the dubious distinction of being one of canola’s most damaging insect pests. However, good news may be on the horizon. A new and powerful tool to counter root maggots may soon be available from a direction few might anticipate: biocontrol.

First recorded in Canadian canola in 1964, root maggots can now be found in virtually every western Canadian canola field. In hard hit fields, they can be found on almost every plant. Published estimates suggest that root maggots may be responsible for in excess of $100 million worth of damage across the Prairies in bad years. However, because moderate damage can be hidden in the roots of an outwardly healthy looking plant, yield losses may in fact be far higher than estimates.

Dr. Neil Holliday, an entomologist at the University of Manitoba, has dedicated the past 15 years to researching potential root maggot biocontrol agents, with encouraging success.

Root maggots in the Canadian Prairies are themselves an invasive species that originated in Europe. Therefore, Holliday and a PhD student went to Europe in search of a natural enemy. Three to four years into the search, they found a small but voracious rove beetle called Aleochara bipustulata. In field conditions in Europe, Aleochara bipustulata larvae specifically parasitize root maggot pupae, while the beetle’s adult stage specifically preys on root maggot eggs and larvae.

Over the last decade, Holliday has run trial after trial to test both the effectiveness and selectiveness of these beetles.

“Parasites are generally very specific, but predators tend to feed on anything that’s about the right size. We were surprised by the narrow range of things we could get them to eat, even when they had no choice in the lab,” says Holliday. “Then we did molecular studies on what was in the gut of beetles in the field to determine what they were eating when they had free choice, and all we were able to detect were root maggots.”

Selectivity proven, Holliday is now just steps away from seeking approval to import these beetles into Canada.

While biological control is, by definition, a very natural pest management system, there are risks associated with bringing alien species into an ecosystem. In order to prove beyond doubt that an introduced biocontrol species will not be detrimental to its new environment, government approval is required, and the path to approval is long and costly: in this case, in the range of $1.5 million, despite the fact that this project is, as Holliday says, “run on a shoestring.”

Very few potential biocontrol species manage to meet the rigorous requirements. However, Aleochara bipustulata appears to be beating all odds.

“We’re in the process of starting the final step between research and implementation,” notes Holliday. “We will submit a petition, hopefully by the end of this year, to the Canadian Food Inspection Agency asking for approval to introduce an alien species to North America. If they say our petition is good enough, we will receive permission, and could be introducing them in 2014 in a few selected places across the Prairies.

“Imagine introducing just a few thousand of these tiny insects into the Canadian Prairies. They usually just disappear,” he adds. “It will be a little while before we know if any survived the winter, and whether they can be successful in their new environment. It’ll likely be about four years before we know if the introductions are successful.”

Should the beetles survive and populate the Prairies, root maggot control should be Prairie-wide and self-sustaining, while not directly costing individual farmers.

It wasn’t always so difficult to gain approval to release alien species for the purposes of biocontrol.

From the late 1950s through the end of the 1970s, an enormous number of alien species were introduced to environments around the world to counter all kinds of pests. Canada had an entire research station devoted to biocontrol in the 1950s and ’60s, which resulted in many new biocontrol agents that produced good success in both forestry and agricultural pest management.

“It was very much the favoured method of pest control even after synthetic insecticides were introduced,” says Holliday. “It was supported because it was considered benign, and once a species is introduced, it doesn’t need any help and doesn’t cost anything.”

However, there were some catastrophic mistakes: poisonous cane toads from South and Central America, as just one example, were introduced to more than 15 countries over 150 years for the purposes of controlling everything from beetles (which they did to some degree in certain areas) to rats (which they did not). In Australia, cane toads – which were introduced in 1935 – now number in the range of 200 million, and have decimated prey and competing predators.

“We’re now much more cautious about biological control than we used to be. And, that’s a good thing,” says Holliday.

“Agriculture is not a risk-free occupation. It’s impossible to do almost anything without having some effect on the environment. We try to balance the risks of biological control with the very real costs associated with not doing anything.”

Despite being very close to his goal of implementation, Holliday – ever a true scientist – sees intrinsic value in the research process.

“My role in this research is to produce information for others to judge,” he says. “Whether or not this biocontrol is implemented, I will have provided all the information that I can. I think this is a worthwhile exercise even if CFIA says no, because at least we have the information that, if not now, at some point might be of value.

“But yes, if we do go forward to implementation, I think producers should greet this with open arms.” 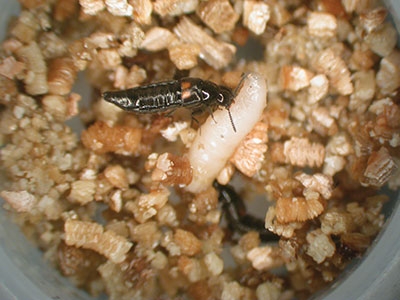