Diamondback moth is a significant canola pest that can be a challenge to manage and control in outbreak years. It can cause heavy economic losses in years with higher infestations levels and has developed resistance to a variety of insecticides.

Natural predators and parasitoids are known to have a role in biological control, however their contributions are not fully understood. More detailed functional response studies are required to understand ways to strengthen biological control programs for pests like diamondback moth and better appreciate the contributions provided by natural enemies in canola agro-ecosystems.

Researchers at the University of Alberta initiated a project in 2018 to develop insights into biological control of diamondback moth. “We are conducting a series of laboratory and field studies to learn more about the various natural pests providing biological control of canola,” explains Sharavari Kulkarni, postdoctoral fellow in biological sciences at the University of Alberta in Maya Evenden’s lab. “The objective of this project is to quantify the rates of predation or parasitism of the major natural enemies of diamondback moth.

“Our main objective is to estimate functional responses of the major natural enemies and to calculate their feeding potential on various life stages of diamondback moth to understand the contribution of the ‘free’ biological control service they provide. This information will help us develop an economic threshold for diamondback moth, including the contribution of natural enemies.”

Kulkarni is conducting cage studies in the field in St. Albert, which includes rearing diamondback larvae in the lab and then adding different densities of larvae per plant at different crop stages to simulate various larval densities on canola plants within cages. At each stage, plant growth, larval damage and crop yield are measured and compared.

A second component of the study is focused specifically on different predators and parasitoids to diamondback moth larvae, to quantify their predation/parasitism and functional responses. The study includes important parasitoid species and generalist predators, such as the seven-spotted ladybird beetle (Coccinella septumpunctata), carabid beetles, damsel bugs and spiders, and their effects on diamondback moth larvae at different stages.

“The diamondback moth larvae and natural enemies were collected in the field, and then brought back to the laboratory to conduct the larval predation studies,” Kulkarni says. “Because diamondback moth is not always present in the Edmonton area, we started our collections in the Lethbridge area, although diamondback moth populations were low in the first two years of this study.

“We also collected natural predators at the University of Alberta’s south campus research farm and in nearby canola fields. Generalist predators, including ladybird beetles, carabid beetles, damsel bugs and spiders, were collected using pitfall traps or sweep nets in canola fields. Ground beetles are hard to rear in the lab, so our studies were conducted on field-collected populations. For the ladybird beetles, studies were conducted on field-collected populations as well as a colony raised in the laboratory. This allowed us to evaluate the contributions of ladybird beetle adults as well as larval stages on predation, which is often neglected.” 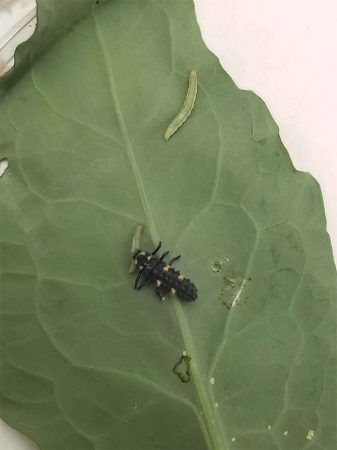 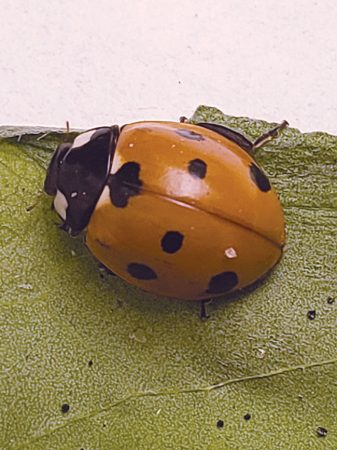 One of the important natural predators of diamondback moth, the seven spotted ladybird beetle (Coccinella septumpunctata).

Preliminary study results from the first two years show some promise. Early indications are that an adult carabid beetle will consume up to 25 diamondback moth larvae per day. Although ground beetles are generalists and will eat both eggs and larvae, given a choice they prefer larvae. Similarly, adult seven-spotted ladybird beetles also consumed 20 larvae per day. However, early results also showed that the predation preference based on the pest stage of diamondback moth larvae, which has four larval instar stages, ranged from eggs to fourth instar larvae and changed for each predator species.

“Because diamondback moth lays its eggs on the leaves, the ladybird beetles are a more relevant natural predator than ground beetles, since they are more mobile. However, ground beetles will readily consume any larvae or eggs that fall to the ground due to rainfall or wind, also reducing overall pest populations. We are measuring the impact these natural enemies make in the lab trials, and at the end of the project we will estimate how much impact overall these natural enemies can make.”

The project will continue for another year, with a field cage study planned for the 2020 crop year near St. Albert. The predator studies will continue in the greenhouse and growth chamber labs at the University of Alberta. The yield assessment is in progress and future work will build on laboratory and field studies to develop functional response models.

“We are very interested in the results so far that show the high numbers of larvae consumed by individuals of different predatory species,” Kulkarni adds. “This underlines the importance of biological control in pest management and the need to consider their contributions in developing action thresholds.

“At the end of the study, we plan to calculate economic threshold levels for diamondback larvae based on the results from the field cage studies. This information can be used to develop future ‘dynamic action thresholds,’ which factor in the mortality caused by natural enemies in developing pest density thresholds to guide pest management decisions.”

The project is expected to wrap up in March 2021. This project is sponsored by the Canola Agronomic Research Program, administered by Canola Council of Canada.