When Allen Xue from Agriculture and Agri-Food Canada’s Eastern Cereal and Oilseed Research Centre (AAFC-ECORC) in Ottawa isolated the fungal strain Clonostachys rosea from a pea plant in 1994, he began the process of developing the first bio-fungicide for controlling Fusarium head blight.

Reducing grain yield and quality, as well as posing a risk to animal health and the safety of human food (since infected kernels are contaminated with a toxic substance called deoxynivalenol), Fusarium head blight (FHB) has become an increasing problem for small grain cereal producers. It is particularly epidemic in Eastern and Western Canada during years when wet weather coincides with wheat during its flowering stage, and is estimated to cost Canada’s agriculture sector over $100 million annually.

Crop rotation and tillage to reduce the risk have had limited success. The use of chemical fungicides is the most effective solution to date, but is costly and has environmental concerns attached to it. Creating genetically resistant cultivars is one of the most practical and environmentally safe measures to control FHB, but while considerable research has been done in this field, complete resistance has proven elusive.

As a result, researchers began to look for a more environmentally acceptable alternative to the use of chemical treatments, namely the biological control of plant pathogens by microorganisms. It was during such research to test a range of potential bio-control agents to see their impact on soil- and seed-borne pathogens of cereal crops, including FHB, that Xue identified the  C. rosea strain ACM941.

“It showed activity as a foliar spray,” Xue says. “But its activity in suppressing G. zeae in crop residues really caught our attention because of how this might be exploited against Fusarium head blight.”

From 2005 to 2012, Xue led two collaborative projects. These included a series of greenhouse experiments and field trials on CLO-1, an experimental wettable powder formulation of ACM941.

To use CLO-1 in diverse environments in Canada, Xue collaborated with Jeannie Gilbert from AAFC’s Cereal Research Centre in Winnipeg, Yves Dion and Sylvie Roux from the Centre de Recherche sur les Grains in Quebec, and Harvey Voldeng, George Fedak and Marc Savard from AAFC-ECORC.

“Our research demonstrated that at concentrations above 106 cfu mL-1, the bio-fungicide provided consistent and significant effects, with disease suppression generally equivalent to that achieved with the fungicide terbuconazole when applied as a foliar spray,” Xue says. “Effects were most pronounced in combination with moderately resistant cultivars.”

He adds that when applied to crop residues, CLO-1 was more effective than the fungicide at reducing the production of perithecia, the pathogen fruiting bodies that form in crop residues and produce ascospores. These are the initial source of disease inoculum and responsible for generating the epidemics of FHB.

“The impact was achieved whether it was applied before or after the substrate was infected with Fusarium head blight, and in field trials applied in either autumn or spring,” Xue says. He  explains that when it was applied to wheat residues in the field in spring, it delayed the appearance of perithecia by seven to 10 days and reduced quantities of ascospores.

Having patented ACM941 in 1999, AAFC signed a 10-year licensing agreement with the Canadian bio-pesticide company, Adjuvants Plus Inc., in August 2014, to develop the technology and gain regulatory approval. With a provisional two-year window to bring it to market, Adjuvants Plus developed DONguard, which is expected to be commercially available in Canada in 2016.

It is exciting news because CLO-1 will provide an extra tool for producers to use in an integrated FHB management strategy that will reduce initial inoculum load and the risks of epidemics. It should also work in tandem with the most resistant wheat cultivars currently available, reducing the need for fungicide applications against FHB for both conventional and organic producers.

Representing a major breakthrough in FHB management in Canada and in the world, this is hopefully just the first bio-fungicide for controlling FHB. Xue has already worked collaboratively with Cornell University’s bio-fungicide expert, Gary Harman, to develop and evaluate new and improved commercial formulations of ACM941.

Researchers also continue to look into more effective and efficient ways to apply the bio-fungicide as well as its potential with other economically important diseases of field, horticultural and vegetable crops. 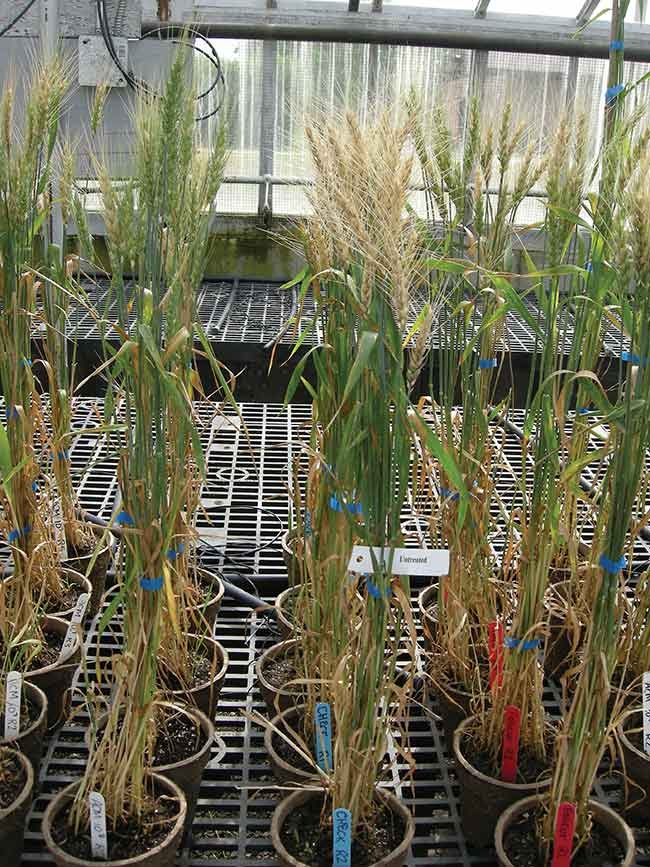