A shoulder-high, pumpkin-round, gleaming white, tightly stretched poly bag filled with grain, more than 200 feet long, is a proven great way to store grain that won’t fit in the bins or sheds.

The Grain Bag Zipper system was developed by Curry Industries Ltd. in 2010. The family-owned Winnipeg-based business, with only four employees, invented Poly-Fastener zipper strips for sealing greenhouse film in 1971. Nearly 40 years later, Walter Curry and his son Mike worked together to develop a similar product for grain bags.

The Currys developed the idea for the Grain Bag Zipper system after attending Manitoba Ag Days at Brandon. Among the grain storage products, Mike Curry noted machines for loading and unloading grain in plastic bags. The company already had a steady business in the silage bag market with its Poly-Fastener system, and Curry reasoned that perhaps the grain bag industry could use a similar product.

After Ag Days, he accepted an invitation to join a Manitoba trade mission that took him to Decatur, Illinois. There, a silage bag dealer gave him a compliment and a challenge.

“He said, ‘I like your seal. It’s the best out there. But, it’s hard to put together; the parts have to match perfectly’,” recalls Curry. “When they were bagging grain, they didn’t have time to go on hands and knees to roll pieces of plastic together to make them fasten. They wanted a simpler approach.”

In early August 2010, they took their newly designed zipper and tool to a farm with grain bags at Portage la Prairie. They worked out the design kinks at Moran Farms. And by the end of August, they were ready to manufacture for fall sales. Today, several shortline equipment dealers on the Prairies are carrying Curry Industries’ Grain Bag Zipper system. A dealer network is starting to develop in the northern United States.

In the 2010 field research, Mike Curry learned some things. “One of the first problems identified by early users was trying to keep the coils straight,” says Curry. “Now, you anchor the channel with butterfly bolts, tighten up both ends, put your material over it, set up the zipper tool at one end and clamp in the insert. Once it’s clamped, it takes less than a minute to slide the zipper closed.”

The inventors came up with a sturdy, simple kit for the product. The kit is meant to be reusable for up to 10 years. “We found that when 20 feet of poly film is stretched out in a field, you have a lot of factors to keep it from moving around,” he notes.

Today, their kit has five pegs, two anchors, the new zipper tool, a hand roller, a slicer (to cut the bag as it is sealed), a push-pull device and a 20-foot universal piece of Poly-Fastener that accommodates both silage bags and heavier grain bags. The zipper tool can be used with either heavy or light poly. Pins fasten the poly bag end to the ground so it is stabilized for a few minutes. Similarly, anchors are there to tie down the poly channel, so that the coils inside can be stretched out straight and flat.

James Valley Colony, at Elie, Manitoba, was one of the first Manitoba farms to bring in a grain bag system as a harvest aid to supplement their conventional steel storage bins and sheds. Six years later, for the 2012 harvest, they put a big portion of their feed grain crop into grain bags.

“We use them mostly for barley, wheat, corn and oats,” says Joshua Wurtz, an assistant in the grain division.

James Valley Colony worked out an approach to seal the bags and protect them from spring flooding. The bags would sit on dirt pads, side by side, perhaps a foot above the field level and with a drain between each pad. If the field floods in spring and the bags still have grain, they will stay above the water line.

For years, they sealed the grain bag ends with pairs of wood 2x4 studs, about 12 feet long. They would sandwich the plastic between the studs, screw the studs together, roll them two or three times and put in more screws so there was no risk of moisture getting through. The system worked pretty well most of time. Sometimes, they would partially unload a bag, close it up, and come back later to finish.

“The problem with closing it up after it has been opened is moisture can get in past the 2x4s,” says Wurtz. “If it’s not sealed properly, you can get rain running up the side of the bag and toward the seal, and working its way through the 2x4s.”

For the 2012 harvest, James Valley Colony purchased Curry Industries’ Grain Bag Zipper system for each end of each grain bag, and a few spare zippers. Two men now are able to close a bag end in three or four minutes.

By January 2013, they had emptied a dozen bags. “There’s pretty much no moisture inside. We maybe lost one or two shovels per bag, so that’s not too bad,” notes Wurtz, who estimates a $39 zipper can be used for several years.

The zipper can be cut off with a knife then separated for use on another bag. If they need to open a small part to monitor grain quality in the fall, they can and then reclose it easily. “It’s very quick, a must-have for serious baggers,” says Wurtz. “We really like the water- and air-tight seal the zipper provides.” 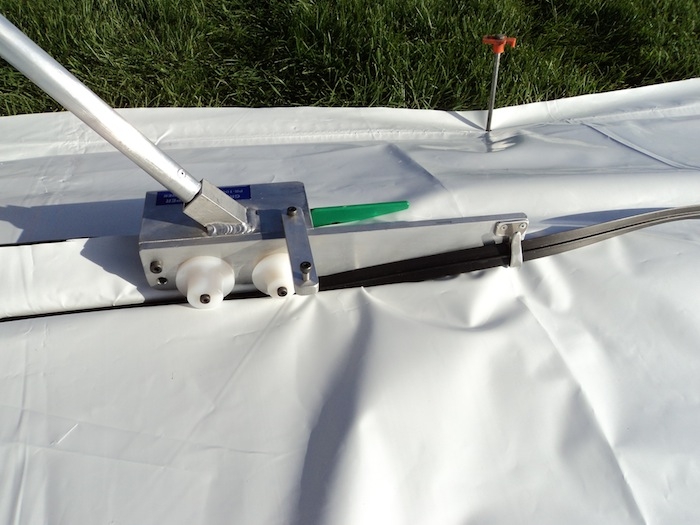 The made-in-Canada zipper guides insertion of the strip that seals the bag. Plastic zippers offer a smart solution to keeping out moisture.
Print this page