Sometimes you have to look in unusual places to find what you need. Dr. Tagnon Missihoun, a post-doctoral fellow at the University of Saskatchewan, has taken that idea to heart in a new project. He is leading a team of researchers to hunt for genes that could confer more durable, broader-spectrum clubroot resistance on canola. And they’re looking in a grass.

Canola growers with clubroot-infested fields recognize just how crucial resistant varieties are for managing this serious disease. But Plasmodiophora brassicae, the soil-borne pathogen that causes clubroot, is known to be able to eventually erode such resistance. So researchers are seeking additional resistance genes to make it tougher for the pathogen to evolve to overcome the resistance.

“The number of clubroot resistance genes currently available to breeders is limited, and genetic and strain variation is present in the clubroot pathogen population of Western Canada. Thus we think it’s important to identify novel genes that can confer durable clubroot resistance given that the strain composition of the pathogen population can shift rapidly in response to selection pressure imposed by resistant host cultivars,” explains Missihoun.

As the pathogen’s name suggests, species in the Brassicaceae family – such as canola, mustard, cabbage and stinkweed – are hosts to Plasmodiophora brassicae. Some resistance genes have already been found among canola’s relatives.

But Missihoun is using a non-host species. “Non-host resistance is the most durable, broad-spectrum resistance employed by a plant,” he explains.

According to Missihoun, the strategy of going to non-host plants to find resistance genes “has long been established and scientifically proven to be effective in controlling pathogen attacks in a wide range of susceptible host plants.” For example, one study found genes for resistance to a rice bacterial blight pathogen in tobacco, a non-host for that pathogen.

Missihoun’s project will be the first study to look in a non-host species for clubroot resistance genes to use in canola.

Missihoun is working in Dr. Peta Bonham-Smith’s lab and will be collaborating on this interdisciplinary project with Dr. Simeon Kotchoni from Rutgers University and Dr. Yangdou Wei from the University of Saskatchewan. The project is funded by Saskatchewan’s Agriculture Development Fund and the Saskatchewan Canola Development Commission (SaskCanola).

Missihoun decided to use a grass species for this project because the majority of non-hosts of the clubroot pathogen identified so far are grasses, such as wheat and winter rye.

He hopes to use Brachypodium distachyon as the project’s grass species. This annual grass is used by the scientific community as a “model species” in research on temperate grasses for several reasons. It is a small plant with a short life cycle, so it’s easy to use in lab and greenhouse studies. It has a small genome that has been sequenced, which is very useful in gene-related research. And it is related to the major cereal crop species such as wheat, barley, oat, corn and rice.

So the project’s first objective is to determine whether or not Brachypodium distachyon is a non-host of the clubroot pathogen. If it turns out that Brachypodium distachyon is a clubroot host, then the researchers will use perennial ryegrass, which is a known non-host to the pathogen. Unfortunately, the perennial ryegrass genome is not yet fully sequenced, but there are techniques to overcome this drawback.

To figure out if Brachypodium distachyon is a host or not, the researchers will infect the plant roots with the clubroot pathogen and then monitor plant growth, flowering and seed production. Then they will examine the roots for the presence of clubroot galls (swellings), and will compare the tissues of the infected plants to tissues of plants that were not exposed to the pathogen.

Plasmodiophora brassicae may be able to cause an initial stage of infection in non-hosts. The pathogen lives in the soil as tiny resting spores, which germinate to release zoospores. The zoospores swim through the soil water to a plant’s root hairs and penetrate the cell walls. In this first stage of infection, the spores form structures called plasmodia inside the root hair cells. The plasmodia release secondary zoospores that penetrate the root cells and form secondary plasmodia. It is this second stage that leads to gall formation and serious yield losses.

“Previous studies on other non-host grasses found the clubroot pathogen is able to infect the grass roots until the second stage of its development where further pathogen development is blocked by an unknown defence mechanism of the grasses,” explains Missihoun.

“This mechanism prevents the disease in the non-host and seems to be what is missing in canola and other species susceptible to clubroot. The identification of pathogen proteins that are recognized by non-host plants is critical to better understand that non-host resistance mechanism. Particular attention will therefore be given to finding the genes functioning in this unknown mechanism in Brachypodium.”

The project’s second objective will be to identify the majority of genes involved in clubroot resistance in the non-host species. The researchers will compare the infected and non-infected Brachypodium plants at the genetic level to see which particular genes were expressed in response to the pathogen’s infection.

And the third objective will be to determine the ability of the identified genes to confer clubroot resistance to canola in the laboratory. This may involve inserting the genes into canola, or it could be that some of the genes are present in canola but need to be expressed differently. The researchers will test canola plants with the resistance genes to see how they respond to the clubroot pathogen.

Missihoun’s project is an intriguing approach to developing durable, broad-spectrum clubroot resistance for the years ahead.

For now, canola growers can take steps to help sustain the resistance in the current clubroot-resistant varieties. The Canola Council of Canada advises growers who are growing resistant varieties in clubroot-infested fields to: rotate their crops, rotate resistant cultivars, thoroughly scout the field at the end of the season for evidence of resistance breaking down, control canola volunteers and weed hosts of the pathogen, and use equipment sanitation practices to prevent the spread of the disease. 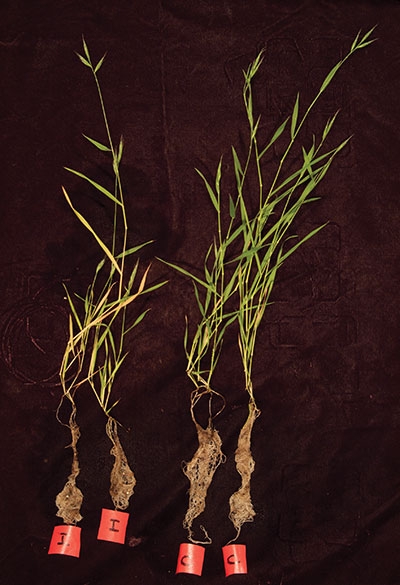 The study is showing that Brachypodium distachyon is not a clubroot host. When infected with the pathogen (I) The quest for clubroot resistance goes to an unusual source.
Print this page