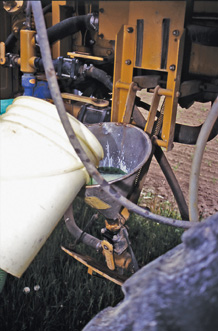 Foliar fertilizers work. In fields where soil or tissue sampling calls for
them, or where in-season visual symptoms of nutrient deficiency appear, foliar
fertilizers can often supply the crucial micronutrients needed to prevent further
yield loss and maintain crop health.

Herbicides work too. The question is whether the two can work together. Can
a program of tank-mixing a foliar fertilizer with a growerÕs post-emergence
herbicide pay off economically?

According to two extensive western research initiatives, the answer appears
to be no. Indeed, Rigas Karamanos, Calgary based manager of agronomy for fertilizer
supplier Westco, would go so far as to say it is an emphatic no. "My recommendation
is simple," Karamanos says. "Don't do it."

Karamanos, an adjunct professor at the University of Manitoba, in co-operation
with Dr. T. B. Goh, carried out a three year project published in the Canadian
Journal of Plant Science that looked for benefits from the early foliar application
of micronutrients. He found none.

The timing is never right, Karamanos says. When it is the right time to spray
herbicides, crops are too small to take up enough micronutrients through their
leaves, and they are at the wrong stage in their development to make good use
of them.

Karamanos believes in foliar fertilizers and often recommends them as a remedial
part of an overall program to correct micronutrient deficiencies. But, he says,
"Adding micronutrients with your herbicide application just because you're
already going over the field isn't going to help."

What is worse, it may hurt, says Robert Hornford, senior agronomist with BASF.
Hornford gets micronutrient calls from growers every year. Often, he says, the
growers are not looking for a yield boost from the fertilizer. Instead, they
are looking to improve the herbicide's weed control or to reduce the risk of
crop injury.

To answer grower questions, the company conducted multiple trials during the
past decade. "We needed to do the research here in western Canada,"
Hornford says. "Oregon research doesn't apply here. Neither does research
from Prince Edward Island or Ontario."

The west has a unique combination of soils, crops and cropping programs, Hornford
explains. Corn belt growers add nitrogen fertilizers to get faster, sharper
activity from many of their post-emergence herbicides, but most western crops
are much more sensitive to foliar nitrogen than corn and soybeans so crop injury
can be serious.

The west also uses lower water volumes, as well as lower spray rates when applying
herbicides. Those low rates make good economic sense, but provide less cushion
if the tank-mixed fertilizer weakens the herbicide's effectiveness. Plus, western
soils are unique, with different organic matter and nutrient profiles than many
other regions.

In one set of multi-year trials in field peas, BASF tested foliar fertilizers
added to its registered treatment of Odyssey plus the crop oil concentrate Merge.
The foliars, chosen because they represent fertilizer blends that growers were
talking about for use with Odyssey, were YieldMax and PhosMax, which each contain
a series of micronutrients, including boron, copper, iron, manganese, zinc and
molybdenum. The tests showed the fertilizers did not make a dramatic difference
in overall weed control, either positive or negative. However, in the YieldMax
treatment, researchers found a consistent degrading of Odyssey's control of
buckwheat, cleavers and lamb's quarters.

Hornford, however, believes there is a reason why some growers and agronomists
think that adding a foliar micronutrient to a herbicide makes it more crop safe.
That, he says, is because the micronutrient is weakening the herbicide. "It
would make as much sense to cut your herbicide rate as it does to add the micronutrient
in those cases," Hornford says. "Yes, it's possible you may get fewer
visual symptoms on the crop, but you are quite likely to get less weed control."

Hornford also points to other potential negatives from adding foliars to the
spray tank. Fertilizers that contain boron, he explains, can prevent solupacks
from dissolving. Also incompatibility of fertilizer and herbicide can lead to
problems with sprayer parts, creating a poor spray pattern and eventually leading
to clogged screens or nozzles.

As well, the myriad fertilizers on the market can have ingredients with unknown
and unpredictable impacts on the spray solution while it is in the tank, as
well as on performance after it is sprayed. "I get calls from growers who
have a fertilizer-herbicide combination in their tank and then can't spray for
a couple of days because of rain," Hornford says. "They want to know
if there will be a problem. I have to tell them that there's no way of knowing."

This is the opposite, he says, of knowing what will happen in the spray tank
and in the crop with a registered treatment. Companies must do multi-year, multi-site
tests on new formulations and mixes, he points out, and they must apply them
at a scientifically determined range of rates, with accurate observations made
of weed control and crop safety. This due-diligence is why crop protection companies
will only stand behind their products when used according to the label. If an
off-label foliar fertilizer is mixed with the herbicide, there will be no company
support if performance issues arise.

Based on BASF research, Hornford strongly recommends against tank-mixing with
foliars. "Growers talk about a potential yield increase from adding micronutrients
to their herbicides," he says. "My response is that there's only one
thing we know for sure, and that is you get a strong yield response from effective
weed control. It's risky to mess around with that."

Westco's Karamanos agrees. "If spraying a foliar fertilizer is warranted
in your field," Karamanos advises, "spray it at a time when you're
going to get a yield increase, not when you're spraying your herbicide."

To mix or not to mix?
There are four primary reasons why untested herbicide and fertilizer combinations
should not be used: