Tree-based intercropping – growing trees together with crops – is a historical agricultural practice. These days primarily smallholder farmers use it in tropical systems, but researchers are focused on potential applications in the temperate soils of southern Ontario and Quebec. 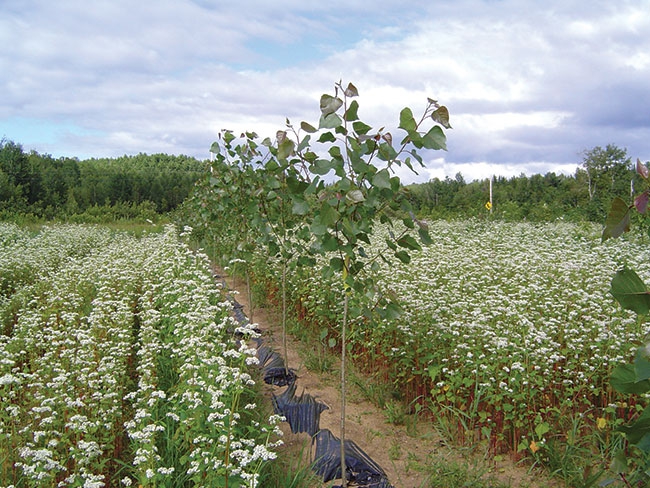 But are producers up for the challenge?

“For agricultural producers, the question is, ‘Why do I want to put trees in my field?’” says Joann Whalen, a professor at McGill University and an author of the carbon study. “Tree-based intercropping hasn’t been widely adopted in Canada.”

On the surface, it seems there are more drawbacks than benefits to the system: the tree spacing between cropping rows used in most research studies is quite narrow, measuring between 15 and 20 metres. That’s too narrow for large equipment, although technically producers can space rows as widely as they wish. In tropical systems, plots are usually worked by hand, but mechanized systems prioritize movement of large equipment and machinery. After a few years, trees begin to compete with crops for light and inputs.

But Whalen says there are many benefits to TBI for the crops. “The nutrient cycling is improved and you could see a reduction in fertilizer in these systems, maybe on the order of 10 to 20 per cent,” she says. “There’s a more diverse type of litter coming into the ground, allowing different types of microorganisms to come into the soil.” Trees also act as natural buffers against wind, rain and hail.

There’s also the carbon storage potential to consider. “There’s no question that if you have trees growing amongst your crops you’ll have more carbon storage. The tree is a reservoir for carbon storage in the wood, branches, leaves and roots.”

Robert Bradley, a professor at the University of Sherbrooke and co-author on the study, adds to the list of benefits. In an earlier study completed by the same team, he says land equivalency ratios for a TBI system with field crops and hybrid poplar reached 2.4, meaning you’d need 2.4 times more land to get the same yields in both crops when planting them separately in a non-TBI system.

In addition, tree roots can salvage leached nutrients. In one study during a particularly wet year, tree roots recuperated over 200 kilograms per hectare of leached nitrate from field crops. [Click images below to expand.]

Trees intercropped with a rotation including buckwheat

Applications
Whalen says it’s essential to provide producers with incentives to adopt TBI systems on their operations, and the carbon sequestration research helps provide an initial benchmark for cap-and-trade or SPEDE payment calculations.

There is precedent for carbon credit incentives in Quebec: Whalen points to a buffer zone project in the province several years ago in which participants were compensated for planting trees in buffer zones at the edge of agricultural fields in vulnerable watersheds.

But what TBI compensation would look like is not known. “There would have to be some clear guidelines on what type of land is suitable, what types of trees are the right ones, and who should get the monetary reward for doing this program,” Whalen says.

Most researchers do not recommend producers establish TBI systems on prime agricultural land. “That would be a hard sell,” Whalen says. Rather, her recommendation is that producers interested in the practice begin by slowly converting marginal land, for instance, areas with poor drainage or rocky soils.

“You could abandon the whole thing and let it re-vegetate itself, but why not make some money off that land?” she asks. “By incentivizing TBI, we could give farmers that option. We could get them to do something on that land that would bring them some revenue.”

Bradley says considering the socioeconomic context of a region, as well as its biological potential, is extremely important to assessing the success of a TBI program. Recently, a graduate student at Laval University completed a PhD project looking at obstacles to uptake of TBI systems in Quebec. In highly productive, competitive regions in the St. Lawrence Lowlands, producers were less open to changing practices. In other areas with more marginal land, producers responded much more positively, according to Bradley.

It’s not that TBI can’t be applied in productive, as well as marginal land – Bradley points out that a single stem of black walnut can earn between $5,000 and $10,000 in revenue. “These trees would take 70 to 100 years to get to maturity in southern Ontario, but if they’re in an open area because they’re not competing for light, occasionally pruned to maintain stem quality, and in a system where the intercrops are being fertilized, these trees can potentially be ready for harvest in 35 years.”

Black walnut is a high-value hardwood that takes significant time to grow; in most TBI systems, faster-growing trees like hybrid poplar are used on their own, or in combination with higher-value trees like black walnut, red oak, white oak or ash. But even for hybrid poplar, which takes 10 to 12 years to mature, Bradley says there are untapped opportunities.

“There are markets that are begging to be opened in Canada. Here in southern Quebec, we use poplar mainly for fine paper pulp, but in Europe they use it for all kinds of things,” he says. “One hectare of corn will bring in more money than poplar. But there are a lot of environmental and yield benefits for the farmers even in productive areas. There is quite a lot more than just year-to-year return on investments.”

Quebec producers interested in diversifying the landscape and their revenue sources might do well to pay attention.