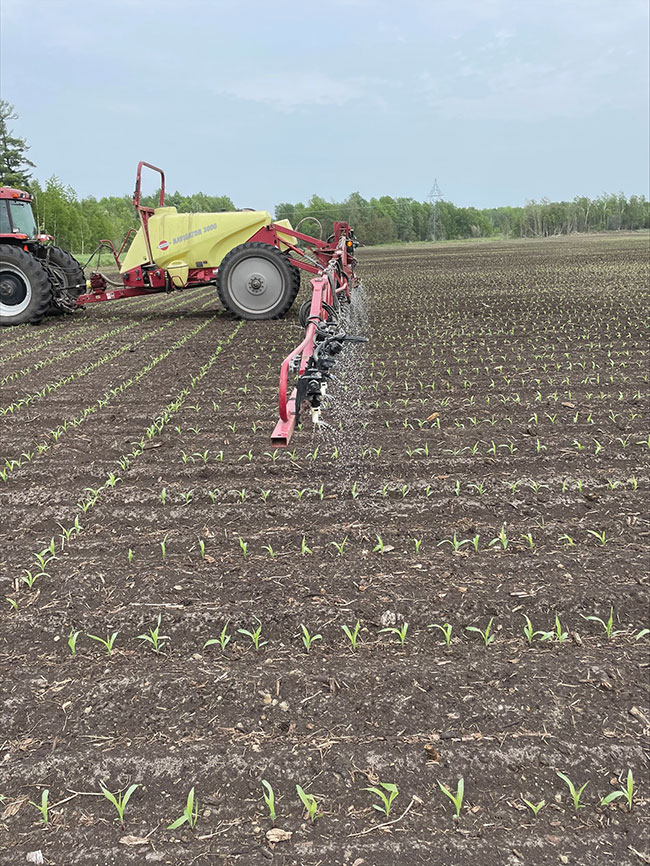 As Bt-resistant corn rootworm continues to be a concern for Ontario corn growers, field trials are underway to assess an intriguing tool for managing this pest: a soil-applied biocontrol method that uses certain species of insecticidal nematodes. In the U.S., applications of these microscopic, worm-like critters have been shown to provide persistent, effective management of corn rootworms. There’s a good chance the nematodes could work on rootworms in Ontario, too.

“Again in 2021, resistant rootworms seemed pretty widespread. I can’t say which specific Cry proteins were involved this year because the rootworms still have to be tested and confirmed for resistance. However, Bt resistance in rootworms is not a problem that is going to go away on its own. It needs our attention.”

Rootworms can cause very serious yield losses in corn crops. Rotating out of corn for even one year is a great way to control rootworms, but that is not practical for some growers. Another option for tackling Bt-resistant rootworms is to use synthetic insecticide products. Baute hopes the nematodes will turn out to be a third alternative.

She and Jocelyn Smith, a research scientist at the University of Guelph’s Ridgetown Campus, are working on the trials to evaluate how well the nematodes work in Ontario conditions, with guidance from Elson Shields from Cornell University.

These insecticidal, or “entomopathogenic,” nematodes live in the soil and seek out particular soil-dwelling insect species, like corn rootworms, that can act as their hosts. When the nematodes find a rootworm larva, they enter its body and release bacteria that kill the rootworm. Then the nematodes feed on the rootworm’s carcass, getting the nutrition needed to produce the next generation of nematodes.

Baute has a longstanding interest in this biocontrol method. “Elson Shields at Cornell University in New York State has been working on these nematodes for at least 20 years, and over the years he and I have had several conversations about their utility on a lot of the below-ground pests that we have. Also, many of my other U.S. colleagues in at least 40 different states have done trials which show the nematodes have some utility, especially for situations where no other control options work well. I’m also interested in these nematodes as a more sustainable practice, a way to control pests without having to rely on chemicals or Bt traits.”

She adds, “[Given the regulatory restrictions for some synthetic insecticides] and the fact that there will not be as many new actives coming out in the years ahead, we really need to start looking towards other control methods.”

She emphasizes, “These nematodes are not intended as the sole management option. They are an integrated pest management (IPM) tool.” Relying solely on any single control measure year after year – no matter whether that tool is a Bt trait, a synthetic insecticide, a nematode or other tactic – really increases the risk that the pest will develop resistance to that measure.

Ontario trials underway
With OMAFRA funding, Baute and Smith initiated multi-year rootworm/nematode trials at five sites in 2021. “The nematodes take at least a year to get established and really kick in. You start to see some effects in year two,” Baute explains.

“Once they get established, the population will sustain itself and help control the pest for years to come. So, you just need a one-time application.”

Two of the five sites are more intensive, small-plot trials in collaboration with agronomist Greg Stewart at Maizex Seeds. Those trials are comparing various control options for Bt-resistant rootworms: the nematode treatment; several Bt hybrids with different Bt toxins; various below-ground soil-applied insecticides; and a neonicotinoid seed treatment, which is being removed from the market by Canada’s Pest Management Regulatory Agency (PMRA).

The other three sites are field-scale trials in growers’ corn fields to see how well the nematodes work in practical situations.

Baute also started some trials in fall 2021 to use the same nematodes to manage alfalfa snout beetles in Ontario alfalfa fields. She is working with crop consultants Gilles Quesnel and Sean Cochrane on these trials, which are taking place on grower fields.

“For the rootworm trials, we took soil samples within 60 days after application to see if the nematodes are present. We will do that each year of the trials to make sure they have established. And we’ll do the same for the alfalfa snout beetle trials next spring,” Baute says. “We will also monitor all the trials, making root comparisons and other observations to determine the nematode’s effectiveness at reducing either the rootworm or the alfalfa snout beetle.” 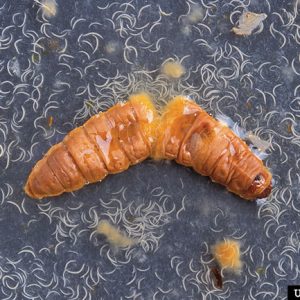 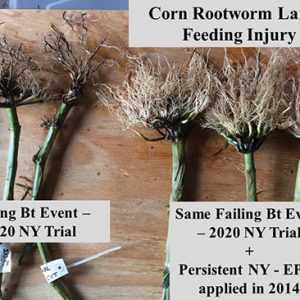 These corn plants all have a Bt event that the present rootworm population is resistant to. The plants on the right were grown where the nematodes were applied seven years earlier. The nematodes help protect the plants from injury, which enables the Bt event to still be grown in that field. Photo courtesy of Elson Shields, Cornell University.

About the nematode applications
Because the nematodes are living organisms, the application process includes measures to help them stay alive and get established once they are applied.

“Cornell University ships the nematodes to us. The nematodes only stay viable for about 48 hours after being shipped so you need to apply them onto the soil within that time. They are shipped in wood chips with dead waxworm larvae that have been infected by the nematodes. The wood chips and waxworm carcasses are rinsed with non-chlorinated water through screens, so you get a solution of the nematodes in water,” Baute explains.

“The nematodes shouldn’t remain in water for more than about an hour because the lack of oxygen will kill them. So as soon as the nematodes get screened into the water, the nematode solution goes into the sprayer or manure tank and gets applied right away.”

In the 2021 trials, the nematodes were applied using sprayers. Baute adds, “Going forward, we would love to do some trials with manure applications. Cornell has done that in many scenarios, showing that it is a viable way of applying the nematodes.”

The best application timing in corn is before V5, to help ensure that the solution will end up on the soil rather than the crop canopy. The trials have also tried drop nozzles to make sure the application gets onto the soil.

“To help the nematodes get off to a good start and establish well, it is best to apply them once the soil is 10 C or warmer. If the weather is too cool, they kind of stay dormant and wait until it’s warmer,” she says. “Spring and early fall are usually great times to apply them because there tends to be some soil moisture, so the nematodes are not going to get too hot and dry and struggle to establish.”

Cornell University has a grower application guide, if you would like more details on how to apply the nematodes.

More trials, other pests
Baute will be starting new nematode trials for corn rootworm and alfalfa snout beetles in 2022 because some funds are still available for this project.

“We are open to helping growers with these nematodes and even supplement some of what they want to do for either the resistant rootworm issue or alfalfa snout beetle control. We really want to help with the threat of these two pests and have a more sustainable management option going forward.”

She is optimistic that the nematodes will work well in Ontario, given their effectiveness in many U.S. states. “New York State has lots of acres applied with these nematodes for alfalfa snout beetle in particular. And they have seen really good success at being able to use the Bt-rootworm hybrids without seeing significant crop injury from Bt-resistant rootworms because the nematodes are taking down most of the rootworm population,” she notes.

“The nematodes cost about $50 per acre, which may seem like a lot, but if you factor in how many years they provide control, it’s worth it. So far in Elson’s trials, they have over 10 years of effective suppression of rootworm populations after one application.”

Another possible benefit is that alfalfa snout beetles and rootworms may not be the only pests that can be managed in this way. “There are indications that these nematodes can also work on wireworms and grubs,” Baute says.

“We are also trying the nematodes as part of a dry bean research project with the Ontario Bean Growers and University of Guelph-Ridgetown. We think it may be possible to use the nematodes to manage western bean cutworm pre-pupae and pupae when they are in the soil, which is the longest phase of the pest’s life cycle. No nematode trials have been done with this pest, so we are going to take the opportunity to do that here in Ontario with grad students.”

If you are interested in participating in the 2022 trials for corn rootworm or alfalfa snout beetle, or you would like more information on this biocontrol method, you can contact Baute at tracey.baute@ontario.ca.