Field trials test Brassica and other beneficial crops as potential biofumigants in rotation for managing Aphanomyces root rot in pulses. 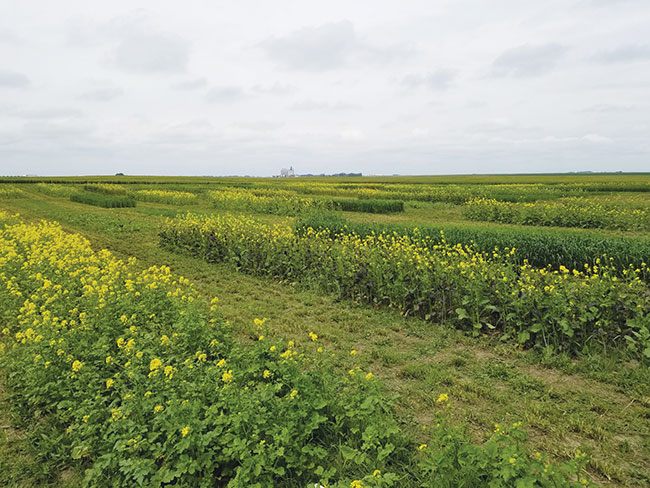 Aphanomyces root rot disease of field pea and lentil continues to challenge researchers and growers across Western Canada. With management tools currently limited to extended rotations and an early season seed treatment, researchers continue to work towards developing new disease management strategies. In one project underway, researchers are taking some promising greenhouse results of using Brassica crops and other beneficial crops as potential biofumigants in rotation out into field trials.

“The project started with a literature review of different crops in rotation that potentially have a biofumigant effect,” says Syama Chatterton, research scientist with Agriculture and Agri-Food Canada in Lethbridge, Alta. “We wanted to determine if the rotational crops and biofumigant crops can reduce the number of oospores in the soil and hence aphanomyces disease pressure and increase yield. In greenhouse trials reported in the literature, various crops were grown for four weeks then the vegetative biomass was chopped and returned to the soil, followed by growing peas for four weeks. Although several Brassica types were successful in reducing oopsore levels in these greenhouse trials, they had never been tested in the field under natural disease pressure. So we initiated field trials in 2017 across four locations in Western Canada, two in Alberta at Lethbridge and Lacombe funded by Alberta Pulse Growers, and two in Saskatchewan at Scott and Saskatoon funded by Saskatchewan Pulse Growers.”

The idea of biofumigant crops has been more well-studied in mustard and other Brassica crops, which contain naturally occurring compounds called glucosinolates that can suppress various soil borne pests and diseases. When the green biomass decays, the glucosinolates are released and break down into isothiocyanate (ITC), which is a natural gas released from the plant tissues that is toxic to other microorganisms such as oospores of aphanomyces. The compounds help decay the oospores that remain in the soil, reducing disease pressure. One of the questions is whether these compounds need contact with the soil to reach oospores, as well as whether or not tillage is necessary.

In the first two years of the project, researchers trialed various shoulder season cover crops at all four locations. With cover crops, the vegetative biomass acts as the biofumigant, therefore the crop doesn’t have to be grown to full maturity and seed production. Unfortunately, in both years early snowfall across all locations prevented any data collection. As well, the very dry conditions in 2017 prevented the establishment of the cover crops prior to the snowfall. Therefore in 2019, researchers decided to move into rotation crops for the remainder of the research project.

The field trials in 2019 included oats and rye, both crops that have shown some efficacy in managing the disease. Fababean, which is resistant to aphanomyces, was grown as a control. In addition, several different Brassica crops with high glucosinolate levels and blends of Brassica crops were grown to determine their ability as biofumigant crops. Some examples include white mustard and Caliente Mustard Blend, a high glucosinolate crop grown specifically for biofumigation, but not yet available in Canada. Other blends such as alfalfa and B. juncea with tillage radish, forage turnips, lupines and various clover and vetch species. 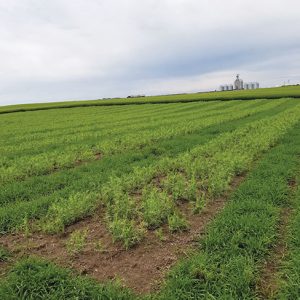 In 2020, peas were seeded across all of the 2019 plots. Photos courtesy of Syama Chatterton. 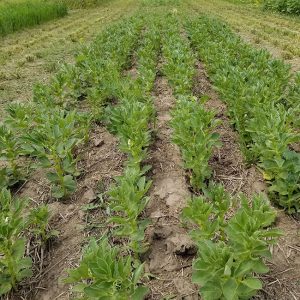 Fababean, which is resistant to Aphanomyces, was grown as a control, with various Brassica plots in the background. 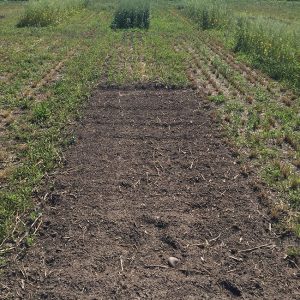 Tilled plots were compared to no-till plots to determine if the biofumigant crops need to be tilled into the soil to be effective.

“In the trials we compared both full-season crops maturing to seed production and crops terminated at the heavy vegetative biomass stage as a green manure,” Chatterton explains. “Although we recognize that producers likely won’t do that, we wanted to look at green manure as a proof of concept to see if it works in the field, and if so then to figure out if it can work agronomically. We are also comparing no-tilled plots with tilled plots to find out if the biofumigant crops need to be tilled into the soil to be effective, as was observed in previous greenhouse studies. Soil samples were collected to try to quantify the level of oospores before and after the cover and rotational crops. In 2020, peas were seeded across all of the plots. We plan to repeat the rotation sequence again in 2021, which we had to delay this year because of COVID-19, followed by peas in 2022.”

Although the early results are preliminary, the data collected in 2020 did show a slight reduction in disease severity. Chatterton notes that 2020 was quite a bad year for Aphanomyces because of such a wet spring. The disease pressure was quite high, and in fact was at some of the highest levels ever seen at their sites. Although the slight reduction by one point in disease severity is not huge, under such high disease pressure, even a small reduction is encouraging. The last bad year was 2016, which was also very wet, and it is possible that with the rotation gap a lot of fields planted to pea and lentil in 2020 were likely also planted to pea and lentil in 2016, leading to a lot more damage. Yield data and soil sample analysis for oospore levels are still being completed. Due to COVID-19, the samples were stored over the summer until researchers were able to return to the labs, which just reopened in November.

“We are hearing that some growers are getting quite discouraged about growing pea and lentil, but we really want to reassure producers there is a lot of research going on with this disease, which is very challenging,” Chatterton emphasizes. “AAFC is in the process of forming a root rot research working group to tackle this disease. Aphanomyces is also the priority for my research group, and along with various projects we are continuing to work on developing a more accurate and reliable soil test for quantification of oospores. This has also proven to be very challenging, but we are making progress. And hopefully we can add more management strategies in the near future once we have completed the promising beneficial crop rotations project and others underway.”