Bees can provide a helping hand to farmers with a new green technology to fight against major fungal diseases such as sunflower head rot and grey mould. 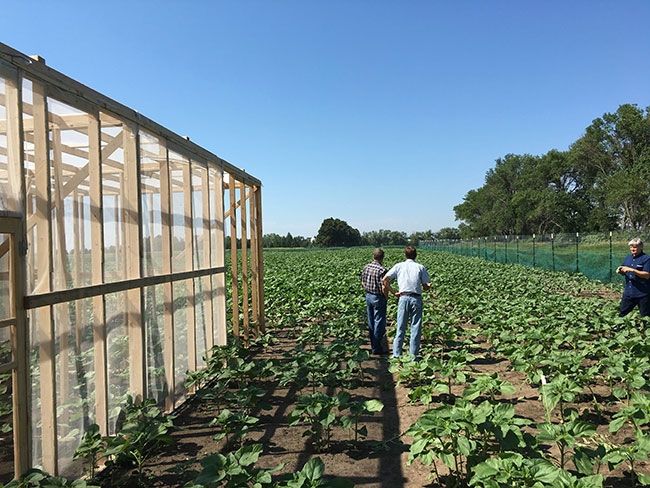 The basis of the technology, a biological agent and beneficial fungus (strain of the Clonostachys rosea species), was discovered in the late 1980s and intensively researched by John C. Sutton, a plant pathologist at the University of Guelph.

Sutton discovered the friendly fungus could block the grey mould pathogen, Botrytis cinerea, from entering strawberries. It was easy to grow in the lab, and highly effective when sprayed on open flowers.

The idea of using honeybees (Apis mellifera) to deliver, or vector, the friendly fungus directly during pollination was published by Sutton and colleagues in 1992 in the Canadian Journal of Plant Pathology. Five years later, research found the natural fungus could be delivered by bumblebees (Bombus impatiens) as well.

His research found that in addition to being effective against Botrytis in plants, it also could suppress other plant diseases – it could act as a shield against Fusarium, Monilinia, Pythium, Sclerotinia and other pathogens.

“It establishes as an endophyte inside every kind of crop plant we’ve looked at – and that must be at least a hundred,” Sutton says. “For example, it establishes inside flowers, stems and roots of corn, canola, sunflowers, wheat, grasses, tomatoes, peppers, blueberries, strawberries, almonds and many greenhouse flowers.”

Independent sunflower production trials with the BVT system began in 2015, operating in Ontario, North Dakota and Minnesota. Vectorite also is being tested for markets in Europe and the Far East.

The Ontario test
Sunflower head rot is one of the target diseases for BVT.

In 2016, four honeybee hives with Vectorite were set up in a 20-acre field. Two kilometres away, six hives were placed in a 30-acre sunflower field as the control.

For the trial, Vectorite powder is loaded into trays and placed by the exits of the hives so bees must walk through the Vectorite each time they leave the hive. After three to nine days on a hive, the depleted tray is replaced. The Vectorite must be supplied for the pollination season, which in sunflowers lasts three to four weeks in normal conditions.

Fresh inoculation of the product must continue throughout the flowering season. Each new flower on the plant is a potential point of infection, so they must be protected by a visiting bee before it can be infected by sunflower head rot pathogens.

At the end of the first trial season, John Davis, the owner of Davis Feed & Farm Supply, had mixed results. Sunflowers were short, and the disease level was negligible for his whole crop of sunflowers due to the dry weather.

Unfortunately, his BVT trial field had a big infestation of giant ragweed and varieties of nightshades, while the control field (without Vectorite) was “very clean” in his opinion.

But when Davis harvested and weighed his results, there were better yields from the Vectorite field. In the control field, yields were 1,200 to 1,400 pounds per acre, while the test group was close to 1,800.

“It was about 20 to 25 per cent more than the yield in the control group,” Davis says.  “I thought the [weeds] would affect the yield in a negative way.”

The company ran a somewhat different test on the seed grower’s sunflowers in 2017. When available, results will compare the Vectorite delivery by honeybees and delivery by bumblebees. Both systems are being developed.

The new sunflower trial had a cool and wet season, ideal for disease. In fact, the 2017 season had heavy pressure from head rot and sclerotia, Davis says.

Despite the conditions this year, he notes the single field used for this trial had sunflower heads that “grew very, very well and looked great.”

U.S. sunflower trials
North Dakota State University (NDSU) also conducted sunflower trials with the BVT system in 2016 and 2017. At press time, results were only available for 2016.

Plant pathologist Venkata Chapara managed the NDSU trial. First year trial plots had a wet flowering season, and plots were sprayed with disease spores. Disease level was rated at 12 per cent on the non-treated sunflowers, and at only five per cent on Vectorite-protected sunflowers.

“We had 1,880 pounds per acre on the control plots and the BVT plots had 2,053 pounds per acre. That’s a difference of 173 pounds, or a nine per cent increase,” Chapara says.

On track for release
According to BVT in September 2017, the overall regulatory approval process for BVT-CR7 with the U.S. Environmental Protection Agency (EPA) remains on track. A decision by the EPA on the approval for BVT-CR7 is expected in the first half of 2018.

BVT gained official organic certification in the U.S. for its proprietary formulation of Vectorite with BVT-CR7 in July. Vectorite is now listed by the Organic Materials Review Institute and meets the U.S. Department of Agriculture guidelines under the National Organic Program standard and is permitted in certified organic crops.

Although the system isn’t commercially available yet, the earliest availability in Canada is projected for the 2019
crop year.