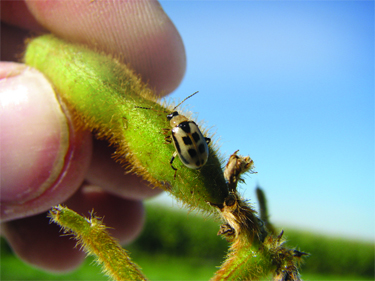 What more is there to say about bean leaf beetles? As with soybean cyst nematode and soybean aphids, bean leaf beetles are forcing more growers to monitor and respond to varying pest infestations, shifting disease patterns, and now a wider range of crops that are being targeted and damaged.

Although colouring may vary, the bean leaf beetle is easy to identify by the small black triangle behind its head.  Photo Courtesy Of Horst Bohner, OMAFRA.

Soybeans used to be the easier crop to grow. All it took, it was said, was some seed, a herbicide or two and there would be little to worry about until September. Of course those days no longer exist and have not for some time. Now, growers face a greater challenge in monitoring for aphids – every year, not every other year, plus reports of SCN moving east of Toronto. And now, bean leaf beetles are moving east and north, and have been found feeding on edible beans, as well as soybeans.

From Horst Bohner’s perspective, 2006 and 2007 have been the worst years yet for bean leaf beetle, particularly in Huron and Perth counties. What is different in the latter of these two years is the inclusion of edible beans, which usually does not happen. “But it goes to show how hungry they were and obviously, if they get hungry enough, they move on to something else,” says Bohner, soybean specialist with the Ontario Ministry of Agriculture, Food and Rural Affairs. “Typically, bean leaf beetle is a soybean issue and what’s caused the largest amount of grief is that August generation. Female beetles lay eggs until late June, and newly hatched larvae feed on roots until late July and August before pupating. New adults will then emerge and start to feed on soybean pods and chew right into the seed, opening it up to various fungal organisms, and really causing some quality issues.”

In food grade or identity preservation (IP) markets, the quality aspect can have a negative effect on premiums and export parameters. As well, the concern with bean leaf beetles in previous years has been more on the potential for disease transmission, particularly bean pod mottle virus. This can cause significant quality discounts for seed growers and exporters.

Lack of rainfall and overwintering
Yet, 2007 was different for bean leaf beetle populations for two reasons. One was the apparent success early in the year of overwintering and the other was the heat and lack of rainfall during the growing season. The former allowed beetles to emerge when soybeans were still in the early vegetative stage, while the lack of rainfall from late spring to mid summer allowed them to flourish when soybeans were at their succulent mid season finest.

Pod feeding can open the soybean plant to a variety of fungal pathogens, and can also affect quality for food grade and IP markets.    Photo Courtesy Of Horst Bohner, OMAFRA.

Ignoring their numbers and trusting the compensatory ability of soybeans was a mistake many growers made, according to Mervyn Erb of Erb Crop Management Systems, near Brucefield, Ontario. “If you let the leaf feeding go, you likely wound up with damaged pods,” says Erb, who detected more feeding on edible bean fields in 2007 than in the past.

By Erb’s account, bean leaf beetles were definitely a problem in northern regions, although there was a section
of western Huron County that seemed to escape widespread damage. An area bounded by Centralia, Crediton, Dashwood, Zurich, Exeter and Mt. Carmel was spared. Yet the region of Clinton to Kinburn and Walton to Broadhagen was a bad area for Erb, requiring nearly 1100 acres to be sprayed in 2007.

Erb agrees with Bohner’s assessment about the beetles’ severity, the influence of the weather and he describes in detail the damage they can cause. In addition to eating the leaves to the point of defoliation on some plants, he says bean leaf beetles often chew the juncture where the pod connects to the stem, but only part way through. “Just enough to make a notch and once that’s there, you’ve shocked the pod and the whole thing withers,” details Erb.

With a greater potential for quality discounts in edible beans, any migration out of soybeans into edible beans is cause for considerable concern among growers. “When bean leaf beetles start chewing on the pod, even just on that first layer of the skin, there’s some shock mechanism that happens to the pod, where the seed underneath will die.”

Finding them is hard enough
Although the heat and lack of rainfall in most areas in 2007 was a primary factor in the northern migration of the beetles, their unique sensory perception also plays a large role in helping them evade detection. Bean leaf beetles are capable of sensing the approach of people, making them very difficult to scout and monitor. “The minute you walk or touch or move the foliage, they tuck their heads and roll off to one side and they’re gone,” explains Erb. “You literally have to stand quietly for half a minute before they start to crawl back on top of the leaves, so a lot of growers don’t even see them.”

As well, the beetles have few natural predators, which means chemical control is the best course of action. In 2007, growers could choose from dimethoate (Cygon or Lagon) or cyhalothrin-lambda (Matador). The good news, says Erb, is that using these sprays is an effective means. “In fact, once you knock them down, they don’t come back in any appreciable numbers,” he states. “But I believe the bean leaf beetle is going to become a more important bug than the aphid. We’re probably going to sustain more of the beetles all the time, and I don’t see any predator that takes them out.”

Bohner agrees, noting that he has been citing bean leaf beetles as an ongoing challenge for several years. “They’re going to cause us more of a problem each year, on average, than in the past,” he says, adding that growers in Minnesota and Iowa are spraying every year for bean leaf beetles. “And we’re not that much different here, it’s just that these populations continue to build up, and while a really harsh winter would knock them back a bit, they’re here to stay and they’re likely going to get worse.”

Soybeans are touted as the primary food source for bean leaf beetles, yet feeding damage on edible bean pods was a
problem in many fields in 2007.  Photo Courtesy Of Mervyn Erb, Erb Crop Management Services.

Early insecticide treatments may help
Growers may have to resign themselves to an annual influx of bean leaf beetles, yet there is one source of protection that growers can try that may make a difference. In 2007, Steve Johns, territory account manager with Syngenta Crop Protection, split one of his fields near Seaforth, Ontario, planting seed treated with thiamethoxam (Cruiser) and metalaxyl (Apron) with fludioxinil (Maxx, blended as Apron Maxx) and the other with Apron Maxx alone.

The new trade name for the pack is ‘Cruiser Maxx Beans’ and costs about $8.00 per 50 pound bag. On their own, Apron Maxx costs roughly $3.00 per bag, leaving around $5.00 per bag for the Cruiser treatment. Overall, cost per acre would be 1.5 to 1.8 bags per acre, meaning the incremental cost for Cruiser over Apron Maxx would be $7.50 to $9.00 per acre, with a total treatment cost of $12 to $14 per acre. In terms of yield increase to cover cost, a grower would need about a bushel per acre more to cover the cost of using Cruiser Maxx Beans versus a standard fungicide treatment of just Apron Maxx.

What Johns found was the areas treated with the Cruiser insecticide provided visible control of bean leaf beetles versus those treated only with Apron Maxx. “Clearly, there was very little feeding damage at the unifoliate to first and second trifoliate,” details Johns. “And because we’re doing a good job of killing off the first generation, we’re getting a diminished level of second generation beetles in those areas.”

Horst Bohner agrees that the visible evidence appears to favour the use of Cruiser to provide some control of bean leaf beetle. “We’ve conducted more than 30 Cruiser trials since 2004, and in those trials where beetles were present, there is no doubt that overwintering was significantly reduced when using Cruiser,” says Bohner.

“However, the evidence is less clear on what impact the seed treatment has on the August generation.”

As soybean specialist for the Ontario Ministry of Agriculture, Food and Rural Affairs, he treads cautiously with recommendations, citing the need for more research.

“Of course, if you take out the first generation, they can’t lay eggs in the soil and then you’re not going to have as large an August generation,” he acknowledges.

In 2005, research was conducted at Iowa State University, to determine the impact of Cruiser on both bean leaf beetle and aphid populations. That year, insect numbers were too low to make significant recommendations based on the data obtained, although the differences in yield among the various treatments were not statistically significant.