Do everything to keep waterhemp out of your field. 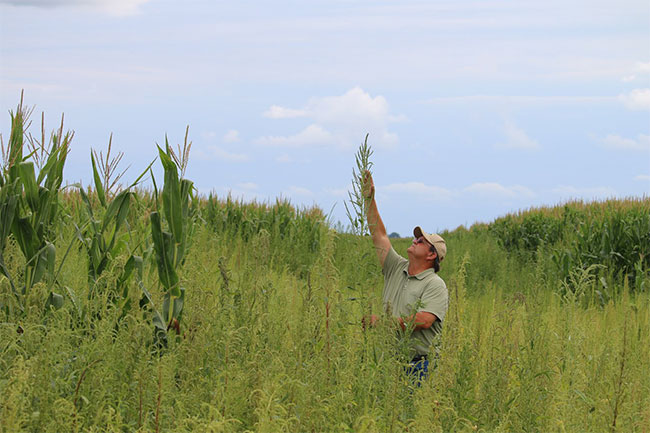 Learn from the experiences of others. That was the message coming out of a panel discussion at the Manitoba Agronomist Conference in 2019, led by Manitoba Agriculture weed specialist Tammy Jones (now with Corteva Agriscience as technical sales agronomist for Manitoba since July 2020), and joined by Richard Anderson, a farmer and BASF representative in Ontario, and Greg LaPlante, with GL Crop Consultants in southeast North Dakota.

In 2019, waterhemp was confirmed in five Manitoba municipalities: Whitemouth, Reynolds, Ste. Anne, Dufferin, and Rhineland. It was also further confirmed in the municipality of Emerson-Franklin in 2020.

“It’s frustrating to find more fields with waterhemp, but it’s not an explosion of cases. The good news about these new detections is that it means growers are looking for waterhemp plants. What would be worse is not looking for it and seeing waterhemp really take off,” Jones says.

The Saskatchewan Ministry of Agriculture conducted an extensive roadside survey of more than 200 soybean fields in the southeast part of the province in 2020, in an area roughly bounded by Highway 48 on the north and Highway 47 on the west.

“Because we did not want to conduct a permission-based survey, we essentially observed these fields from the road with binoculars and tried to spot anything that resembled waterhemp. There was only one field out of the lot, in the far southeast corner of the province, that was suspicious,” says Clark Brenzil, provincial weed specialist in Regina. “Unfortunately, the producer would not give us permission to enter the field to collect the sample and confirm or dispel the suspicion. So, no there are no confirmed cases in the province yet.”

The adaptation or establishment of populations in Manitoba is no surprise, as waterhemp is found in many areas of North Dakota, directly south of where the Manitoba populations have been found. There are many ways that waterhemp could have found its way to Manitoba, such as on equipment, wildlife movement, or water flow. In Ontario, waterhemp has rapidly spread through the corn and soybean growing areas since 2014 when it was first found in Lambton County. 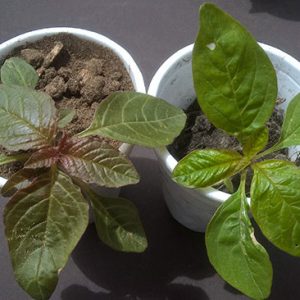 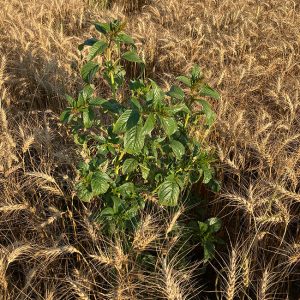 In Manitoba, waterhemp must be destroyed when found. Photo courtesy of Tammy Jones.

Be afraid
Waterhemp (Amaranthus tuberculatus) is in the same Amaranthaceae family as redroot pigweed. It has oval to lance or spearhead shaped waxy-looking leaves that grow three- to six-inches long with an alternate leaf arrangement on a hairless stem. It typically grows four to five feet tall but can grow to more than 10 feet tall. The terminal inflorescence can be more than one foot long, with many thin lateral branches that produce, on average, 250,000 seeds per plant, but up to one million seeds in some cases.

That prolific seed production causes major problems because the seeds can emerge throughout the growing season, making herbicide control difficult. It thrives in open areas, and row crops are especially vulnerable to competition.

In Ontario, research has found waterhemp caused an average yield loss in corn of 18 per cent and 43 per cent yield loss in soybean. More than 20 plants per square foot can reduce soybean yields by 44 per cent.

“If waterhemp emerges early, I’ve seen that you can lose up to 100 per cent of the crop,” Anderson says. “Because it germinates throughout the year, you need sequential herbicides with residual control that last throughout the year.”

In North Dakota, LaPlante says all the early warning signs were there from grower experiences in Arkansas where waterhemp got out of control. Now, waterhemp has become a major problem in North Dakota.

“We failed misearably to nip it in the bud. One weed becomes millions or billions in a few years,” LaPlante says. “I estimate the increased costs of herbicide control of at least $35 per acre to control waterhemp.”

On top of those pre-seed layering costs, LaPlante has seen harvest losses because green stems and high moisture makes harvest slower and more difficult. Some plants are so large that the combine header can’t cut them – the header just pushes them over.

Be very afraid
On top of the very prolific and competitive nature of waterhemp, herbicide resistance is another scary issue. Genetic PCR testing has confirmed Group 2 and Group 9 (glyphosate) resistance in Manitoba. In North Dakota, Group 2+9 resistance and Group 14 resistance is suspected but not yet confirmed. In Ontario, Groups 2, 5, 9 and 14 resistance has been confirmed, including Groups 2+5+9+14 multiple resistance.

In addition, the Ohio State University Extension Agronomy team has indicated that the trend is for waterhemp to develop resistance to any new herbicide sites of action that are used in post-emergent treatments within about three cycles of use. 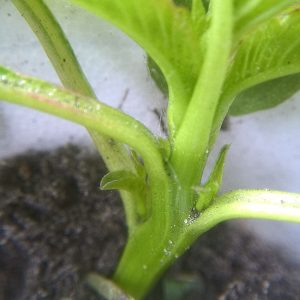 Waterhemp has a hairless stem. 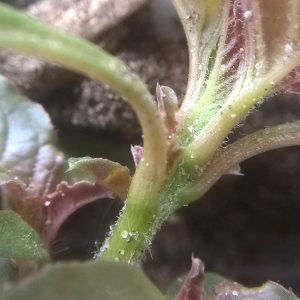 Redroot pigweed has hairs on the stem. Photos courtesy of Richard Anderson.

“Look where the leaf joins the stem and use a magnifying loop if you need to. There can be a lot of variability in the field so scout in different locations,” Anderson says. “This is very important because the weeds need to be controlled early.”

Dealing with the fear
In Manitoba, as a Tier 1 Noxious weed, it must be destroyed when found. That means total destruction. Jones has seen a worst-case scenario where 37.5 acres of a quarter-section field were mowed and then disced.  The worst areas were water runs, low areas of the field, and strips where the combine had previously spread seed. The rest of the field was walked and rogued for waterhemp plants – many times to try to prevent seed set.

“If you’re pulling a waterhemp plant, don’t just drop it on the ground. It can regrow from dirt on the root ball,” LaPlant cautions.

Growers in Ontario and the U.S. have found that management of waterhemp isn’t easy once established, and it takes an integrated approach to try to keep it under control. To give herbicides a chance, practices that encourage early canopy closure can help improve weed control.  This includes using narrow row spacing and increased seeding rates. Inter-row cultivation can help in row crops, and cover crops can help suppress the weed when there is no crop growing on the field. Crop rotation and machinery sanitation to prevent seed spread will help to slow its spread.

LaPlante agrees that early, pre-emergent control is important. “Growers in North Dakota weren’t using pre-emergent layering because they didn’t think waterhemp would be an issue. It took a few short years for Group 2 and 9 resistance to develop. Short term strategies have now become long term strategies for us.”

In Ontario, with Group 2, 5, 9 and 14 herbicide resistance confirmed, post-emergent choices are becoming more limiting. In University of Guelph research trials, Lontrel XC, Pixxaro, Infinity and 2,4-D ESTER have provided over 90 per cent visual control of waterhemp. 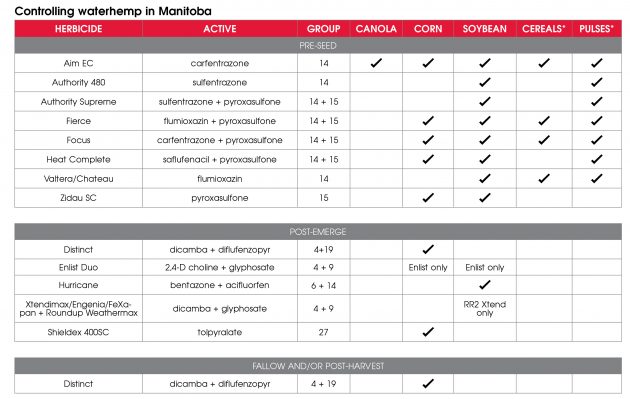 Source: Adapted from Saskatchewan Guide to Crop Protection, 2020. Follow the information in the guide and on product labels, or contact your local company representative.
*May not be registered on all crop types. Consult product label.

“The Group 4 Enlist and Extendimax technologies are very important for us in-crop,” Anderson says.

In Manitoba, the choices aren’t really that different. There is a good selection of pre-seed residual Group 14 and 15 herbicides, depending on the crop.

For post-emergent follow-up, there is a heavy reliance on Group 4 herbicides, but several other Groups are effective, including Groups 6, 19, and 27 in some crops.

Farmers and agrologists can also have waterhemp tested for herbicide resistance at Harvest Genomics, a Guelph, Ont., biotechnology company. A leaf sample of about one-quarter-dollar size is submitted to the lab, and results are typically available in two to three days after receipt of the sample. This will guide herbicide selection to help manage the weed.

For Manitobans, all is not lost, especially with a greater diversity of narrow row, competitive grain crops. Being proactive, scouting for the weed, and destroying may help keep the weed from becoming too invasive.

“There are some good news stories in 2020 from growers who used effective pre-seed Group 14 and 27 herbicides sequentially on badly infested fields from 2019. There was so much less waterhemp pressure than the year before. This year one of the fields was in wheat and we only found three or four waterhemp plants,” Jones says.