Conventional wisdom dictates that phosphorus fertilizer is tied up in the soil rapidly, leaving much of it unavailable for crop uptake. However, recent research looking at the long-term availability of phosphorus is changing that perception.

“All the studies that quote low-use efficiency used the ‘difference’ method. This method is based on calculating the difference in uptake between a crop that is fertilized with phosphorus and a crop that is not fertilized with phosphorus,” says Dr. Fernando Selles, a soil scientist previously with Agriculture and Agri-Food Canada. He adds that this method assumes that residual phosphorus in the soil is not available to the crop, which produces misleading data.
Selles and his colleagues with Agriculture and Agri-Food Canada recently published results from a 39-year field research trial. In 1967, researchers started applying phosphorus-only or phosphorus and nitrogen fertilizer to a continuous wheat rotation and a summer fallow-wheat-wheat rotation. Between 1994 and 2005, the researchers stopped applying phosphorus to some of these plots in order to see if the crops could use the phosphorus that accumulated in the soils.

Dr. Cynthia Grant, a soil scientist with Agriculture and Agri-Food Canada, says the results are supported by other evidence, as well as research out of Rothamstead Research.
“If you look at balance sheets from all over the Prairies, it shows the same thing. If you look at the amount of phosphorus that’s exported in the crops we grow, and compare that to the amount of phosphorus that’s put on the soil, it’s a very, very close relationship,” says Grant.

Grain yield or production had the biggest effect on phosphorus uptake. Anything that increased yield or production also increased the amount of phosphorus used by the crop. For example, Selles says that the fallow-wheat-wheat rotation used about two-thirds of the phosphorus as compared with the continuous wheat system, as only two-thirds of the land was cropped in the fallow-wheat-wheat rotation. Proper nitrogen fertilization also played a role.

“The first thing that we found was that if you don’t properly fertilize your crop, you cannot expect it to do well when there are good growing conditions,” says Selles.

When nitrogen and phosphorus were applied to crops, the amount of residual phosphorus in the soil increased for the first 20 years. During this time, a water deficit limited crop yields and phosphorus uptake. Between 1994 and 2005, growing conditions improved and grain yields increased. The crops used the equivalent of 100 percent of the applied phosphorus, and the residual soil phosphorus plateaued for 12 years.

However, the nitrogen-starved crops used the equivalent of just 75 percent of the applied phosphorus, revealing that crops deficient in another nutrient can’t take advantage of phosphorus fertilization.

The trials also showed that crops will use phosphorus that has been banked in the soil. In the plots where phosphorus application stopped in 1993, crops that still received nitrogen used the equivalent of 109 percent of the phosphorus, on average. The extra nine percent represented phosphorus native to the soil. Over the same 12-year period, the crop that didn’t receive nitrogen or phosphorus used just 90 percent of the banked phosphorous.

Such research leads Grant to caution producers against purchasing products that promise to “unlock” phosphorus. “It’s like pulling a rope. If you pull the phosphorus out, it will move in from different pools and become available over time,” she says.

However, crops may need phosphorus close to the roots in the spring, especially if the soil is cold or wet.

“When soils are cold, if the concentration of phosphorus in the soil is relatively low, you might have to have some phosphorus close to the seed to sort of jump-start the whole process. Phosphorus that’s taken up later in the season may not have as big of an effect on crop yield because it doesn’t help the plant early enough,” says Grant.

Balancing the bank account
Grant advises producers to use this type of research to develop long-term strategies for managing phosphorus. “If you manage your entire rotation and make sure you’re applying adequate amounts of phosphorus in the preceding crops, it can carry you through for the other crops and maybe a little bit of starter is all you need to optimize your crop yield, as long as you’re maintaining the fertility through the rotation.”

During the Agriculture and Agri-Food Canada trials, the crops continued to yield well on stored phosphorus for 12 years. Usually the yield was the same as the crops still receiving phosphorus. Selles reports that there were four years of particularly cool, wet springs which led to reduced yields for the crops without applied phosphorus.
Overall, the continuous wheat crops saw a total production reduction of 10 percent in the 12 years they didn’t receive phosphorus. Rotations that included a fallow year saw no significant reduction in crop yield, possibly because of phosphorus mineralization in the fallow year.

Selles likens the accumulation of phosphorus to socking away money in a savings account. Producers who have been adding phosphorus for several years can then use some of their savings, as long as they don’t overdo it. “You don’t want to get down to zero. It’s the same thing, pretty well, as with your bank account,” he says.

Soil tests are good at detecting rising levels of phosphorus, but poor at identifying decreasing phosphorus. Selles recommends not only taking soil samples every three to five years, but also testing the amount of phosphorus in the grain. In the future, the same infrared technology that measures protein levels could be calibrated to measure phosphorus, which would help producers calculate the balance of phosphorus left in the soil.

There is still more research to be done on the subject. Scientists at Agriculture and Agri-Food Canada are now studying what type of phosphorus is contained in the soil from the original plots used in the research trials.
“That will be the next step. When we know that, we will know even better how to manage phosphorus,” says Selles. 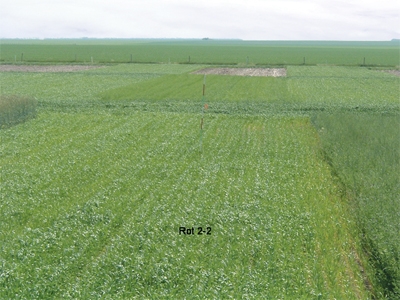