A response to applied zinc rarely happens on Prairie soils. Zinc (Zn) deficiencies tend to occur on calcareous, high pH soils that have been machine leveled, are sandy in texture or have relatively high soil phosphorus (P) levels.

In Saskatchewan and Alberta, some of the earliest fields developed for irrigation were land levelled for flood irrigation, creating the potential for Zn deficiencies. While rare, Zn deficiency has been observed in irrigated alfalfa fields during stand establishment near Outlook, Sask.

“I thought Zn response would be a piece of cake on those land-levelled fields but I haven’t been able to prove that you can get a Zn response on those fields, except for a couple cases on newly established alfalfa stands,” says Gary Kruger, provincial irrigation agrologist with Saskatchewan Agriculture at Outlook, Sask.

Fields that were land levelled redistributed topsoil so that water could uniformly flow over the field. Kruger says this alteration could result in the soil being unable to supply sufficient zinc for crop growth. Crops such as beans, corn, flax, soybeans, alfalfa, barley, potatoes and wheat are more sensitive to a low supply of zinc from the soil and, as such, may benefit from zinc application.

Deficiency symptoms usually show up first in dry bean and lentil, and these crops may be responsive to added Zn. Very high rates of P may also induce Zn deficiency in flax.

Kruger first noticed a zinc response at a Miry Creek Irrigation District demonstration site at Cabri, Sask. in 2011, which was established to evaluate the nutrient requirements of a new alfalfa field to provide improved yield, stand longevity and competition with weeds (dandelion). The field had a poor history of production since it was developed in the 1970s. The clay soil had been in annual cereals for several years, and the field was divided into six strips testing the following fertilizer treatments: P alone, potassium (K) alone, P-K-Zn together, P-K together and control treatments. The project was sponsored by the Irrigation Crop
Diversification Corporation (ICDC).

The field was seeded to Stealth alfalfa on June 12, 2011, with a cover crop of Morgan oats sown at 35 lb/ac. The Stealth alfalfa was sown by splitting the seed in half and double seeding the field at 45 degrees to the direction the cover crop was sown. The alfalfa had excellent emergence and establishment in 2011.

A 0- to 6-inch soil sample was analyzed prior to fall fertilization 2010. A critical level of 3.0 ppm in coarse soils and 1.5 ppm in medium to fine soils has been established for dry bean production under irrigation in southern Alberta. This field tested at 1 ppm, rated as low by Midwest Laboratories. Fertilizer recommendations based on a target yield of 3 ton alfalfa/ac from this analysis was 40 lb P205, 9 lb sulphur (S), 1.8 lb Zn, 2.3 lb manganese (Mn) and 20 lb elemental S/ac. Phosphorus was applied to the field at about double the recommended rate suggested by the November 2010 soil analysis. (See Table 1.)

Kruger notes that phosphorus fertilization reduces Zn uptake in the alfalfa. Tissue testing at the early bud stage during the year of establishment showed that the Zn levels in the P alone and P-K treatments were lowered to marginal levels in the alfalfa tissue. He observed that during the year of establishment, the
alfalfa treatment that had the P-K-Zn fertilizer had a darker green colour. In addition, this treatment had a higher yield in the first cut compared to the other treatments, but that advantage disappeared in the second cut and the second year of harvests.

“The difference at the first cut may have been that the alfalfa roots weren’t exploring enough of the soil to obtain enough zinc for growth, but after it grew more later in the year and in the next year, the larger root system increased the plants’ ability to find zinc in the soil, so we didn’t see an advantage after the first cut,” says Kruger. (See Table 2.)

Kruger also observed a Zn deficiency in a research project initiated in 2013 and led by Sarah Sommerfeld, regional forage specialist with Saskatchewan Agriculture at Outlook. The project was set up to look at P, K and S fertilizer needs of a new alfalfa stand. During the year of establishment in 2013, a Zn deficiency was noticed.

“When they went to put down the fertilizer treatments in October 2013, they found symptoms consistent with Zn deficiencies, and a plant tissue analysis confirmed the deficiency,” says Kruger.

With the detection of the deficiency, a Zn treatment was added to the study. This project will carry on in 2014 with yield and forage quality analysis.

While these two examples provide an indication of the potential for Zn deficiencies, Kruger cautions that more research is needed to confirm if Zn deficiencies are more widespread than thought.

“One of the issues I see with southwest irrigation projects is the longevity and productivity of the alfalfa stands. My gut feeling is zinc may help alfalfa stands remain productive longer. I have also seen that protein content in alfalfa isn’t always up to snuff, and maybe zinc could help deal with that as well,” says Kruger.

Another factor that may be at play is that the land-levelled fields can have K deficiencies. Kruger says he has seen very good responses to K fertilizer on alfalfa. Because K stimulates root growth and root exploration of the soil, K fertilizer can help a plant overcome other nutrient deficiencies in fields with irregular fertility due to land leveling.

Until more is known about fertilizing alfalfa, Kruger recommends farmers balance their fertility program based on soil test recommendations. He says that if a field was land levelled, a Zn deficiency is likely for sensitive crops and may benefit from a Zn fertilizer application. Zn is easily blended or impregnated on fertilizer, which can be broadcast or banded.

“Zinc applied to soils attaches to soil particles and is agronomically effective for many years. I speculate that a three lb/ac application is enough to correct the problem perhaps for a farming career,” says Kruger. 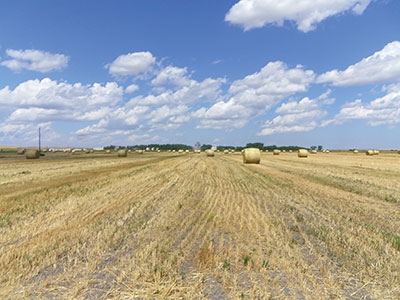 Land-levelled irrigation fields could be candidates for zinc deficiency. A response to applied zinc rarely happens on Prairie soils.