Eliminating human error reduces sampling variability by a minimum of 10 per cent. 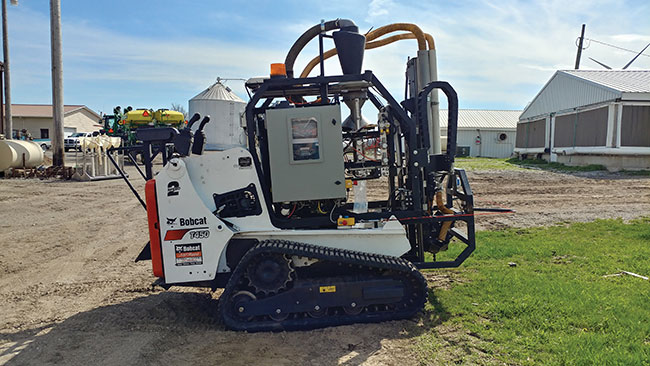 A company in West Lafayette, Ind., is transforming the accuracy and convenience of soil sampling. Rogo is building robotic soil sampling machines on top of a Bobcat skid steer platform that autonomously works a field, pulling soil samples, and bagging them.

“We built the soil sampling technology from the ground up, including the hardware and software required to allow the robot to work autonomously. The sampling grid is pre-programmed, and once the robot is unloaded at the field, it works on its own,” says Drew Schumacher, president of Rogo. The autonomous soil sampler is called the SmartCore.

A few key components allow the robotic sampler to operate independently. A self-cleaning, high-speed auger is at the core of the sampling system, ensuring fast sampling and eliminating cross-contamination between samples. A proprietary bagging system that collects individual samples and heat-seals them in sequence ensures accurate identification of each sample.

In the Corn Belt of the United States, soil sampling is typically done on a 2.5-acre grid to a specific depth, usually zero to 12 inches. Currently, the machine cannot do a split sample, such as a zero- to six- and six- to 12-inch sample, but Schumacher says that technology is on their development list. SmartCore can cover a 500-acre field on a 2.5-acre sampling grid in about five hours – about twice as fast as a human sampler. The machine can hold 250 samples.

The machine can cover a 500-acre field on a 2.5-acre sampling grid in about five hours – about twice as fast as a human sampler.

SmartCore is guided by RTK-GPS and navigational algorithms, which provide accuracy and repeatability from year to year to within inches. Obstacles are avoided using a variety of sensors, and in the worst case, the robo sampler immediately shuts down if an obstacle is contacted.

A key benefit of SmartCore is accurate soil sampling depth and year-to-year repeatability at the same location in the grid. Using a ground sensor, SmartCore accurately samples to a specified depth within one-eighth of an inch.

In 2019, the Practical Farm Research Group of Becks Hybrids, the third largest seed brand in the United States, in Atlanta, Ind., conducted research on the accuracy of SmartCore compared to human samplers. Three human samplers were provided a 2.5-acre sampling grid with GPS. Their soil samples were analyzed and compared for variability. SmartCore conducted the same sampling grid three times and also compared the samples for variability. Even though the humans knew they were being tested, the human variability was 15 per cent across the samples. SmartCore had an average of five per cent variability between the three sampling sets.

“Our value proposition is that if you can eliminate 10 per cent [or more] of sampling error, that will make nutrient planning much more accurate and allow growers to increase input utilization – putting it in the right spots in the right amounts,” Schumacher says.

For corn growers, nutrient input costs can easily reach $125 per acre. Reducing or optimizing those costs by only 10 per cent can save $12.50 per acre. SmartCore is competitive with most soil sampling programs, at around $4 per acre based on a 2.5-acre grid.

“When we did a full launch in 2018, the demand really started to take off. We had so much demand that we had to focus on product development and manufacturing and pull back on sales and marketing efforts,” Schumacher says.

For 2020, the company hopes to be able to scale up across the Corn Belt in the United States. Beyond that, plans are to expand to Canada, Brazil and Australia.

The company isn’t selling SmartCore robots to crop consultants or farmers. Rather, Rogo hires staff to operate them. That helps manage costs and maintain consistency.

Rather, Rogo hires staff to operate them. That helps manage costs and maintain consistency.

“We believe this business model is better for everyone. It ensures better accuracy and efficiency,” Schumacher says. “When we talk to the market, the people that soil sample are really just doing it on a break-even basis for the clients. They are happy to have someone else do the sampling so they can focus their time on helping their farmers make more profit.”


Related
A&L Canada and Deveron team up to expand soil sampling services
Getting the most from soil sampling
Benchmark soil sampling: steps to success
Soil testing Q & A